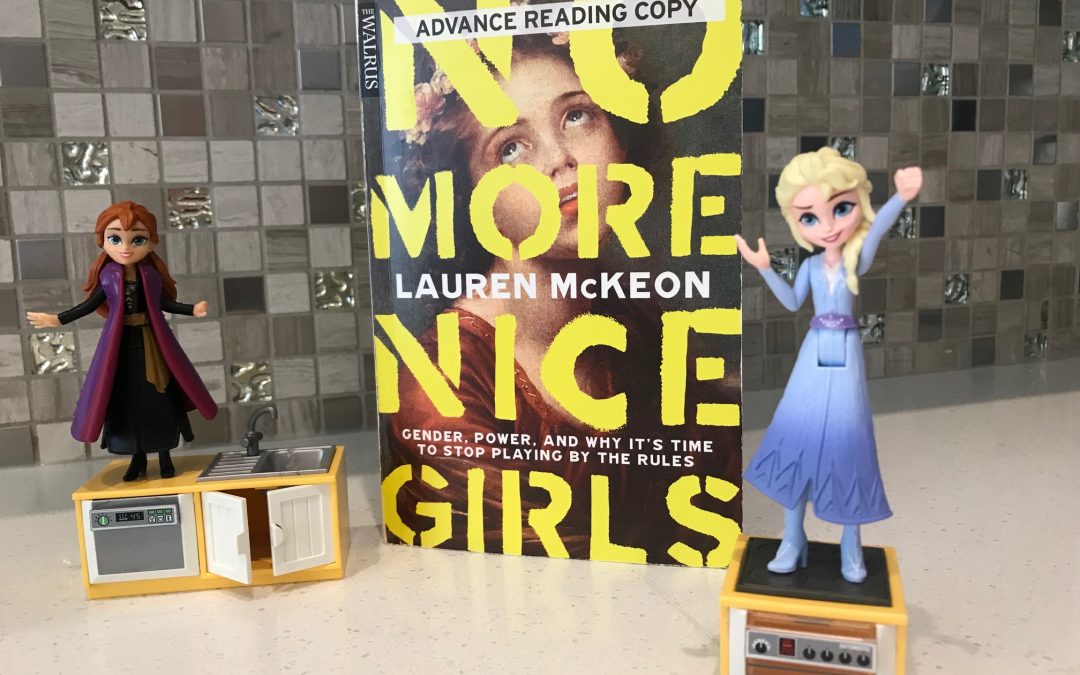 Although this book was published right before the recent Black Lives Matter protests and Coronavirus pandemic its publication is even more timely considering what’s gone on in the world since March. No More Nice Girls, Gender, Power, and Why it’s Time to Stop Playing by the Rules by Lauren McKeon is an examination of our current power structures and why they only seem to enable a specific part of the human population, mainly, the people who built these power structures centuries ago. I can already sense some of my readers rolling their eyes, so before you get any further: yes, this is a review of a book on feminist theory and yes, I recommend reading it, and yes, I agree with much of what it says (but not all!).

Lauren McKeon is a well-respected Canadian journalist who has written on this topic before. Her first book F-Bomb takes a deep dive into the anti-feminist movement and what drives it, while this, her second book is a look at the power structures that feminists are fighting against. It covers a wide range of topics; gender expectations in the workplace, women in corporate leadership roles, the history and re-emergence of women’s only clubs, the #metoo movement, Justin Trudeau’s particular brand of feminism, female roles in global politics, sexual violence as tool to oppress women, and so on. Obviously the idea of power holds a variety of definitions depending on the speaker, but McKeon does a thorough job of defining and giving examples of power structures, and the environments women continue to lack power within. She’s also quick to remind readers that her definition of ‘women’ is inclusive, so trans-gendered people, non-binary people, queer women, two-spirit people, they are all included in her argument for a new power that allows everyone a space at the table. And unlike her first book, which I complained didn’t have any references, this second book is FULL of them, so you know it’s been well-researched and fact-checked.

As I read more books that examine women’s role in society, I find my perspective subtly shifting, viewing potential challenges, successes, and various issues through a different lens. I know most women will agree with me when I say the most drastic shift in perspective happens when you give birth to a child. It’s this moment, and the years that follow that really crystallize the fact that different things are expected of different genders. That in itself is not a problem and quite frankly, unavoidable, but as more is expected of women outside the home, why are we still shoehorned into the housewife role at the same time? How can we succeed at gaining power while thriving in a workplace built by those who only up until a few decades ago, preferred we stay at home? McKeon argues that our definition of power and success in business is one created by men, and unless we try to emulate them, we won’t be successful. But, for the women that DO emulate men, eschewing a traditional family life, dedicating all their time to work, potentially even losing their cool in a boardroom, these women are accused of being cold and calculating while behind their backs people wonder if they’re excelling at work to make up for a void in their personal life. Instead of being called ‘asservite’, they’re just known as ‘bitchy’. I think Taylor Swift highlights the double standards perfectly in her song and video “The Man”, which also happens to be a catchy tune 🙂

Simply complaining about the discrepancy between men and women’s expectations and roles doesn’t deserve any special mention because much of this we already know, but what sets this book apart is its suggestion that instead of trying to fit women into already existing structures, we build our own instead. McKeon studies female executives and their success or lack of it, and finds that women are much more likely to succeed if they are working within a gender balanced team. Women who are simply inserted into a male-dominated environment are subject to elevated levels of harassment, condescension, and criticism, so many of them move on or are fired because they don’t ‘fit with the existing team’. The author builds up on these findings to argue that re-imaging the typical work environment and hierarchy will benefit both genders, not just one or the other. To further exemplify this argument she visits gyms, co-operative work spaces, even women’s only clubs to demonstrate how an environment and it’s rules can shape the work (or lack of it) that gets done within it.

There is one point that McKeon makes that I wholeheartedly disagree with. She states that “There is arguably no public or private realm that pronatalism [the idea that parenthood should be the focus of everyone’s adult life] misses. In the workplace, it is what drives us to bring newborns to the office, what has us ask, by way of introduction, how many children a co-worker has, what lets those with children go home early and causes those without kids to pick up the office slack” (p. 262 of ARC). Ummmm what? Parents are leaving early and everyone else is picking up the slack? Maybe in some workplaces, but in the vast majority, people aren’t given exceptions to go pick up their kids early, and if they are, they’re making up for it later that night by working in the evening or getting into the office extra early. In fact, many working parents tend to be harder on themselves, forcing in extra hours whenever possible because they feel the ever-present “Mom guilt”, even in relation to their job and employer. The suggestion that parents are given a free pass at work is offensive to me, and the recent pandemic has proven my point; even though schools have been closed since March, parents were still expected to miraculously put in a full day of work (plus homeschooling!!!) while having their kids home with them. I can feel my blood pressure rising as I write this so I best wrap it up, but please, read this book, men and women alike, it will open your eyes to a better way of doing things.