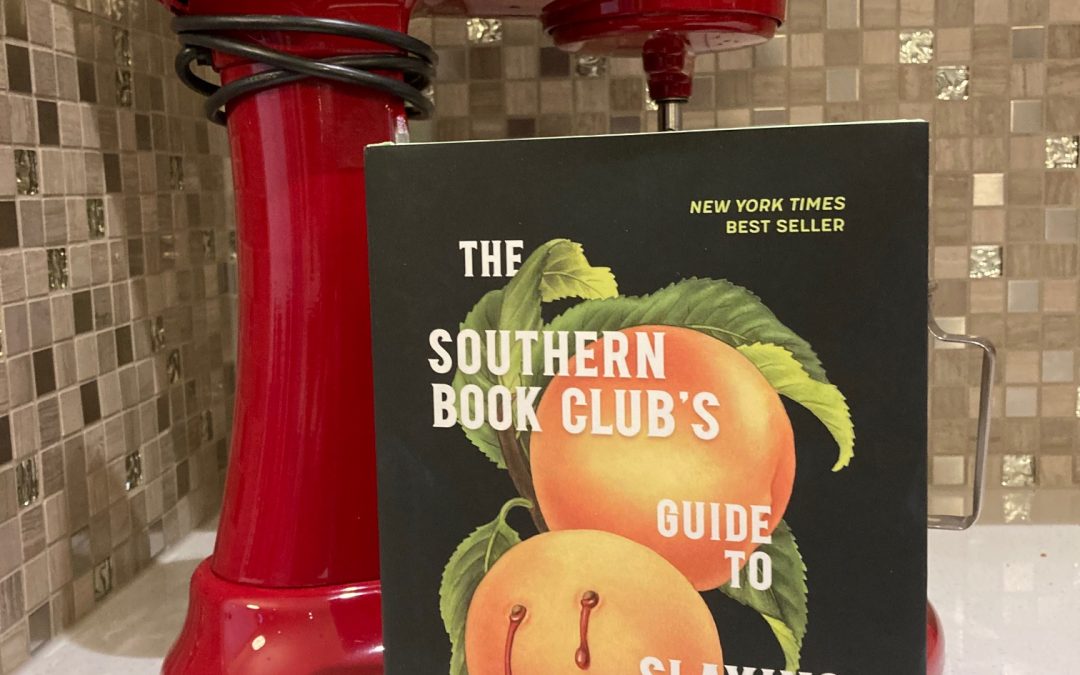 Do you have to be in a book club to enjoy this book? Absolutely not! Will you enjoy this book if you can find humour in just about any situation? That would be a resounding ‘yes’! Humour and horror mix strangely well together, and when you throw in a bunch of stressed-out housewives from the 1990s, it is a recipe for a strangely entertaining and successful novel. The Southern Book Club’s Guide to Slaying Vampires by Grady Hendrix is a satirical look at gender roles, class stereotypes, and the danger in maintaining appearances at all costs. Plus, a little trip back to the pre-internet days is also a lovely sojourn, especially in this, the year of disasters that is 2020.

Patricia Campbell lives a very privileged life; she has a beautiful house, two (mostly) well-behaved children, and a workaholic husband with a high-paying job. Although she’s expected to do LITERALLY EVERYTHING around her house, she does have spare time when her kids are at school, so she’s a member of her neighborhood book club which reads true crime books. Patricia and the other housewives are a mixed group; some are exceptionally religious, some are obsessed with keeping their house clean, while others let their kids run wild and drink the day away in the pantry. Life is stuffy and boring until James Harris makes an appearance on their block; handsome, eager to join their book club, and worldy in a way their husbands don’t seem to be, he brings the new blood that everyone’s been hankering for. But then a series of strange attacks occur, and children begin to go missing in the poorer parts of town. Oh, and Patricia gets her ear bitten off by James’s Aunt behind her house one night. It quickly becomes clear this isn’t the type of action these women were looking for…

Having a book club myself, I’m always excited to read about other book clubs, especially fictional ones! They give me ideas on how to improve my own club, and I love reading about the different dynamics between members because everyone who belongs to one knows they can have their quirks! And even though it’s still months away from Halloween, I always enjoy a good vampire story line (unless it’s a vampire romance, those I can’t handle). A quick glance at the author photo also reassured me this book would be entertaining, which it most certainly was.

Patricia was a character I could sympathize with, but not relate to. The book takes place in the early 1990s, but Patricia and her family seemed firmly rooted in the 1950s with very clear gender stereotypes playing out. Patricia’s husband wouldn’t even clear his own dishes from the table for god’s sakes-can you tell I hated him? Anyway, I silently rooted for Patricia to stand up for herself, but it wasn’t until the supernatural began to occur that Patricia grew a backbone. She’s one of the first to ‘fall’ for James, but then she’s also one of the first to see him for what he truly is: a vampire who sucks the life out of people, both physically and figuratively. Still, because Patricia is ‘just a housewife’, no one believes her, especially her husband, so she’s forced to take things into her own hands. She gravitates towards another marginalized groups who are rarely believed, in this case, a poor black woman who cared for seniors in her neighborhood. Together, with few resources and other people actively working against them, they face a manipulative demon who excels at convincing people of the impossible.

You can no doubt sense this book has a bigger message about many of society’s problems, but the message is hidden within layers of storytelling that’s fun to reveal. Being a woman who has stayed home for the past few years with my children, the commentary on ‘women’s work’ and housewives in general was of supreme interest to me, especially considering this book was written by a man! There’s a struggle between valuing and dismissing domestic work in the book, but it clearly honoured the role of women, in whatever capacity that was:

“‘Why do you pretend what we do is nothing?’ she asked. ‘Everyday, all the chaos and messiness of life happens and every day we clean it all up. Without us, they would just wallow in filth and disorder and nothing of any consequence would ever get done. Who taught you to sneer at that? I’ll tell you who. Someone who took their mother for granted.” (p155-156).

Surprisingly, that conversation happens between two women, and Patricia is on the receiving end of these comments. It’s not always men that downplay the work women do to take care of their families: it’s all of us, all of society. We’ve all dismissed this type of work, even when we are the ones doing it. So how does this discussion lead us back to vampires? It’s easy to make excuses for things we don’t really want to see or acknowledge, and this happens on various levels in the novel. Who deserves our attention and belief? Why do we choose to ignore things that are crying for our attention in front of us? These characters choose to hide behind the notion of manners to ignore what’s really going on in their marriage, their friend group, and their very own neighborhood. The truth is scary, whether it be a blood-sucking vampire or a predator that targets children. Hendrix exposes the danger of hiding behind our manners, the problem with turning the other cheek instead of risking embarrassment to call out what we see is wrong; it’s all in here, and it’s all worth our attention.