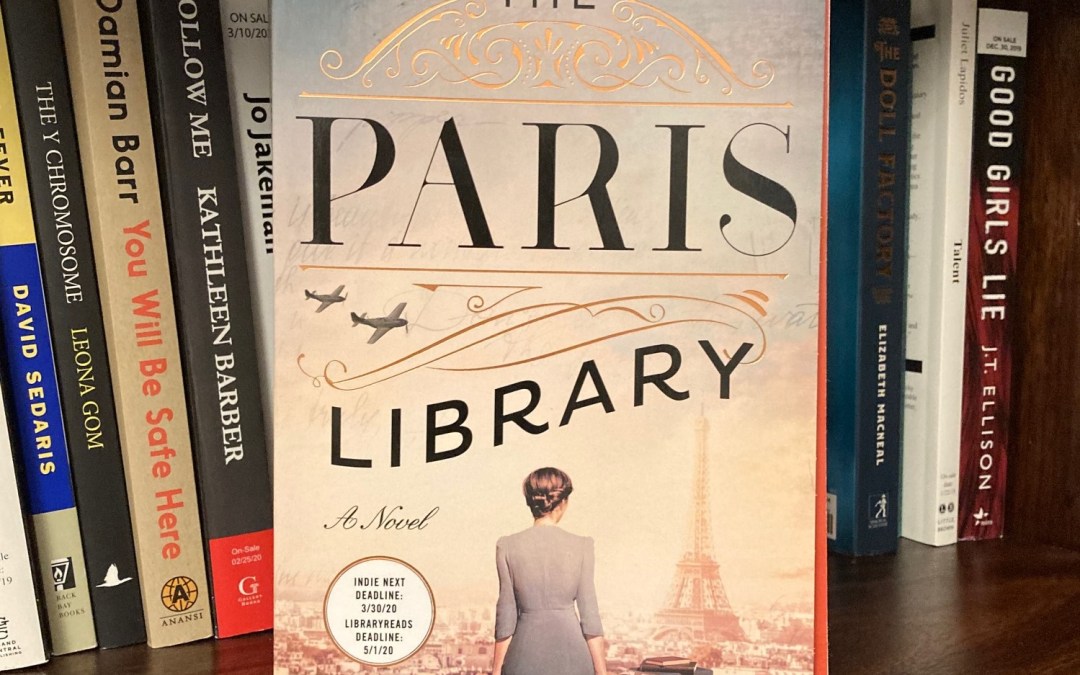 I’ve had some great luck with historical fiction lately, and my 5 star reading streak continues with The Paris Library by Janet Skeslien Charles. It helps that this novel is all about the power of reading and its ability to build resilience, which is something I’ve certainly benefitted from during this pandemic. Although the characters are dealing with far more difficult circumstances than I (the story is centered around WWII), I couldn’t help but draw parallels between the isolation of the protagonists vs. the forced isolation many of us are currently enduring. It won’t be a spoiler to assure you that the moral of the story is books are the medicine to what ails us, no matter what generation we find ourselves in.

It’s 1939 and Odile has just gotten her dream job at the American Library in Paris, and has made many new and fascinating friends in her role there. The ‘subscribers’ (i.e. patrons and members) as well as fellow library employees all offer a unique glimpse into the world outside of Odile’s limited social circle. Unfortunately her family is still confused as to why she wants to work there at all, as they believe she should focus on finding a husband instead. In addition to Odile’s life as a young woman and library employee in Paris, we also get to know her through the eyes of Lily, a lonely teenager living in rural Montana in 1983. What we learn about Odile as an aging senior through Lily is just as engaging as what we learn about Odile in her own voice during WWII. There may not be a war going on in the 1980s, but there is plenty of drama to balance both storylines.

Aside from the enticing fact that this novel is all about the power of books, there is much to love about its plot and characters too. Odile is a three-dimensional protagonist that jumps off the page. It was easy for me to like her because we both find solace in books and libraries but her flaws are just as visible, making her feel like a real person rather than a vehicle for moving the plot forward. Lily is also a complicated person, but her development is not as thorough or realistic as Odile’s. Still, I found I could relate to Lily’s teenage complaints that mostly dealt with isolation and her desire to build a new life elsewhere. In direct contrast to Lily’s restlessness is Odile’s love of Paris, which becomes all the more heartbreaking as Parisian traditions and delights are slowly broken down by the German occupation.

Odile’s determination is the shining beacon of light within the terrible circumstances that arise in both timelines of this book. Both Lily and Odile have to deal with tragic losses in their lives, yet Odile’s tenderness towards Lily is somewhat surprising once we learn of the true reason she leaves Paris decades ago. Odile is not a hero or anti-hero, she is a fallible person who helps some and hurts others. So much of what happens to her seems unbelievable, but I’ve heard many war survivors with similar, shocking stories. What people endured back then is still so heartbreaking to read about even while we push our way through a global pandemic. Despite the hardships of war, Odile is still depicted as a person with flaws regardless of her circumstances, which made her situation seem all the more believable. Going through a war doesn’t automatically make you a hero, or even a good person, but it undeniably shapes you, as Odile’s character continually demonstrates.

The writing in this book is unobtrusive, finding the perfect balance between description, dialogue and action. I never felt as though things dragged, but the author also took great care in spending ‘down’ time with each character to give us a glimpes into their inner lives. My favourite moments from Odile’s perspective all involve her admiring a certain aspect of the library or a particular book:

“I ran my fingers along the spines. Choosing one, I opened to a random passage. I never judged a book by its beginning. It felt like the first and last date I’d once had, both of us smiling too brightly. No, I opened to a page in the middle, where the author wasn’t trying to impress me (p. 3 of ARC).”

Even though there is no shortage of sadness in this book, I only ever felt a distinct coziness while reading it. The comfort and power of the story felt like a blanket I could wrap myself up in, and I was sad to see it end when I reached the last page. The Paris Library reminds us of the horrors of the past, and all we have to be thankful for now. My hope is that all book lovers find solace in this story like I did.