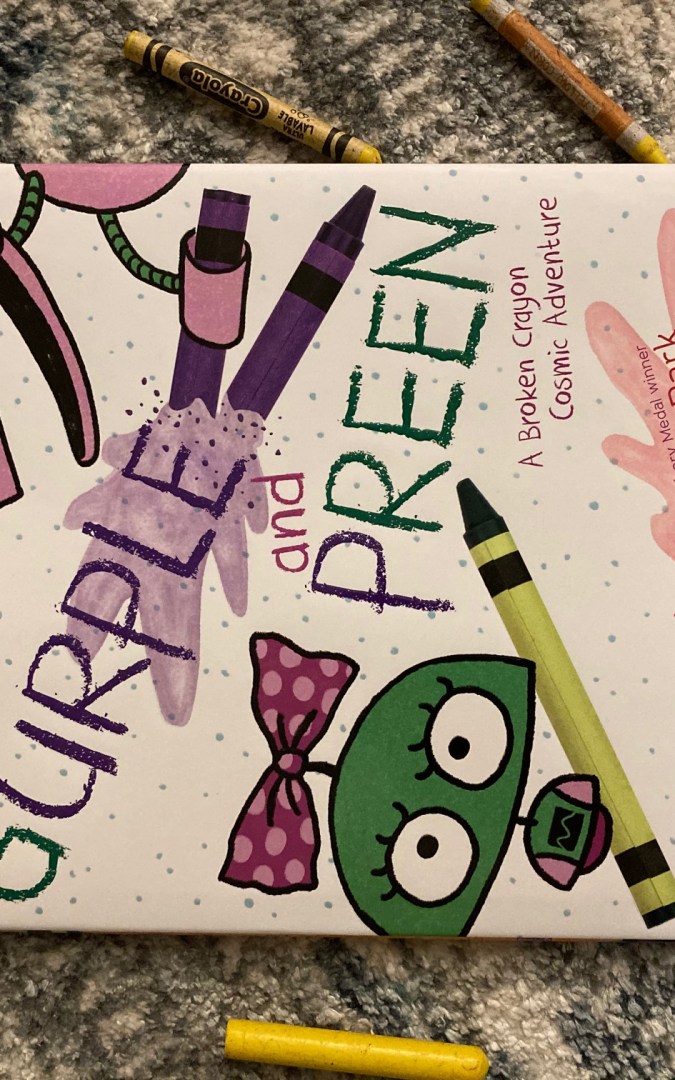 I am a big believer in always having markers, crayons, and basic art supplies easily accessible to my kids at all times. For one thing, it makes it much easier to tell them to ‘play on their own’ when they have this kind of stuff handy, but more importantly learning to express oneself is an important skill, and drawing is a fun way of doing that. I love how all three of the picture books below encourage kids to draw, paint, and craft their way to a new understanding of the world. I may not be artistic myself (far from it actually), but I want my kids to grow up unencumbered by the opinions of others; make art because you want to, not because you are looking for praise from other people.

I’ve written about my love of Vikki VanSickle’s children’s books before, and her latest Anonymouse is another quick, easy-to-read story that delights my toddler with its neon pink illustrations by Anna Pirolli. Anonymouse is the name of an elusive artist that tags the unidentified city with thoughtful paintings that speak to the other animals, rather than people. A tiny mural of an ant holding up a globe is painted alongside a curb, a target is depicted on the side of a lamppost at the perfect height for a little dog to aim at while relieving itself, giant arrows appear on the roofs of buildings to steer birds to patches of grass for grazing; each piece of art gives the animals an upper hand in what is a mostly uninhabitable urban space. Anonymouse eventually disappears, but he leaves a lasting legacy inspiring other animals to create their own work of art.

My almost six-year-old calls this book mysterious, and when I first read it to her she didn’t really understand the point of it. The obvious comparisons to the real-life Banksy artist are obvious to most adults when you see the illustrations, but the more I read this book to her, the more she enjoyed it, laughing along with the subversive artwork that delights both adults and kids alike. There’s no somber, classroom-approved message in this book, rather it is a celebration of art for art’s sake, reveling in the spontaneity of street art. We are lucky to have some nice pieces here in Calgary that I can show my kids, ‘just like in the book Anonymouse’.

Crayons are positioned as the all-in-one tool any child or robot needs for success in Gurple and Preen, a Broken Crayon Cosmic Adventure by Linda Sue Park, illustrated by Debbie Ridpath Ohi. Gurple and Preen, both robots, have just crashed on the wrong planet in their rocket ship, and the ship is blasted to bits. Gurple is distraught over this, and can’t seem to stay positive, lamenting over the fact that they keep finding only junk to repair the ship with. Preen is quiet but hard-working, taking all the ‘junk’ that Gurple disregards and using it to re-build the ship in time for the ‘pods’ to come alive. And this is where the story gets creative; hundreds of crayons litter the crash site, and every time a crayon is broken, an object or animal comes out of it, which is the aforementioned ‘junk’ that Gurple finds no use for. So for instance, a black crayon produces a panda bear, an orange crayon produces a skateboard, a green crayon produces a lampshade, etc. Even more impressive, the broken crayons also produce the human child commanders who lead the ship’s mission. I love this idea that crayons can produce anything you want them to!

I was surprised at how quickly both my kids fell in love with this book because it felt like the concept behind the broken crayons was too advanced for them. And even if that was the case in the first few readings, we’ve read it together so many times they have many of the pages memorized by now. My daughter’s favourite part of the story is when a broken crayon produces toilet paper, to which Gurple exclaims “Itchy glitches…robot’s don’t go to the bathroom!” This line guarantees a fit of giggles, which has won the book a permanent space in our weekly rotation of bedtime reads.

Lastly we have Amy Wu and the Patchwork Dragon by Kat Zhang, illustrated by Charlene Chua. Amy is at school and the theme of the day is dragons. The teacher asks the kids to draw pictures of their own dragons, but when Amy draws an eastern dragon (thin, brings good luck, may not have wings), and the rest of her classmates draw western dragons (thick, breathes fire) she worries that her dragon is too different and refuses to display her work. Later that night at home, she remembers where she got the inspiration for her dragon, and her family helps her craft an eastern dragon costume to bring to school, one that she feels fully represents her creativity.

My complaints about this book are minor, because from a kid’s perspective, it’s a fun little read. My daughter loves crafts, so she really enjoyed this story that encourages kids to get creative, glue beads into their hair and dump glitter onto everything. Can you guess at what my problem is? Amy somehow convinces her family to drop what they are doing, on a weeknight (!), and help her build this enormously large and complicated crafting project. As a working parent, not only do I dread something like this being dumped on my lap on a Tuesday night by my own kids, but I worry a book like this may convince kids that this is a reasonable thing to expect parents to do ON A WEEKNIGHT. Quite frankly, having to build my child a dragon costume in one evening sounds like my absolute nightmare. Aside from that very adult-like quibble, it’s beautiful book with a heartfelt message, so I’ll still recommend it.