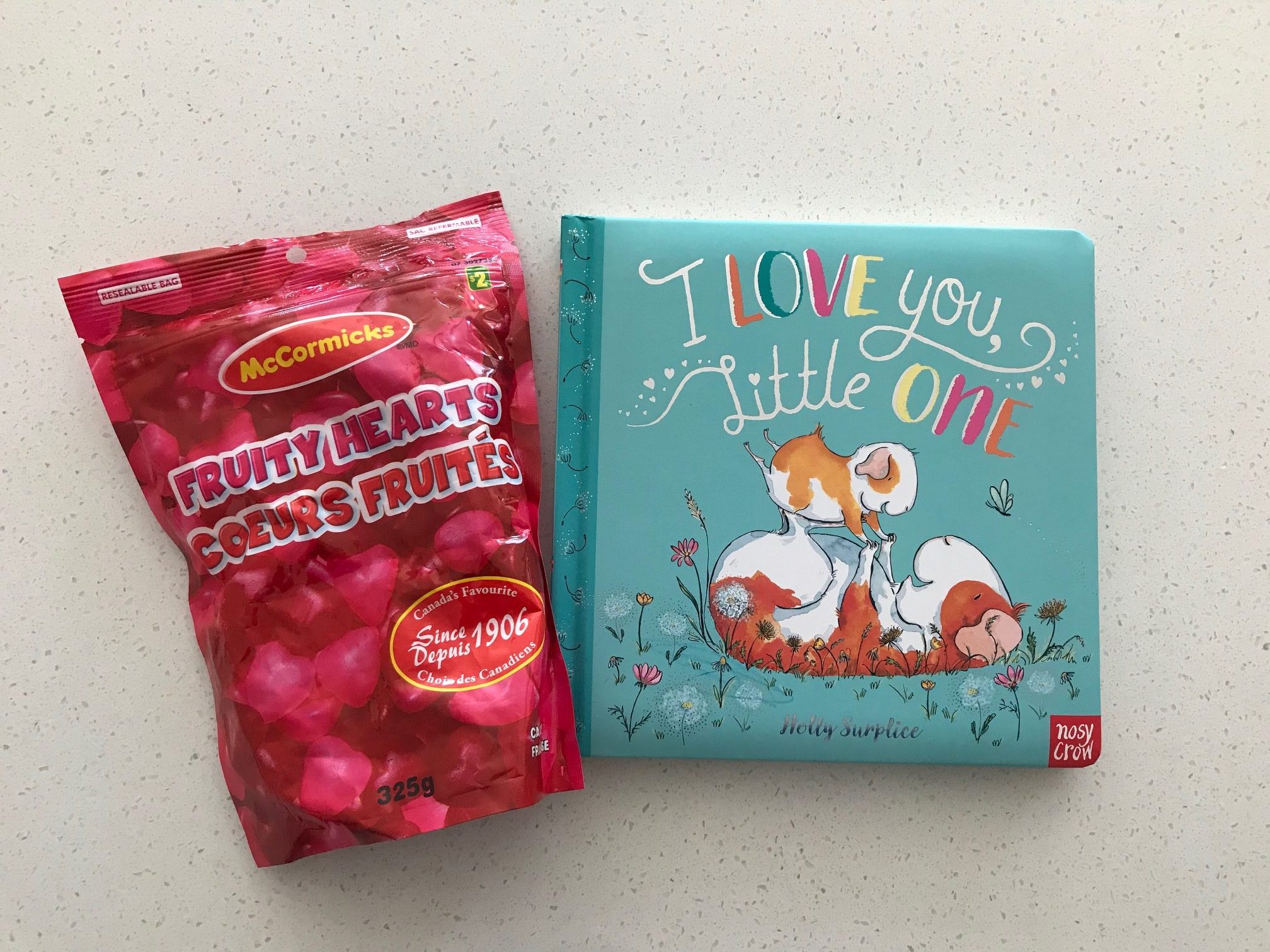 When I was little, every holiday, even manufactured ones like Valentine’s Day were exciting, usually because it meant I was going to get something sugary to eat. Only a few things have changed since then; instead of getting chocolate from my parents, I now get it from my husband, and now that I’m a Mom, I’m building new twists into these traditions. I pair these inevitable holiday treats with something healthy: a new book! Penguin Random House Canada was kind enough to send me a selection of some of their picture books about love, and despite one major disappointment, I loved the other two they gave me.

There’s a genre of kids book (usually board books) that simply focuses on a parent figure describing all the ways they love their child. On each page is an example of how they demonstrate love (cleaning up after them, kissing their skinned knees, rocking them to sleep when they’re upset, etc). A number authors have written books like this, and they are forever popular. I’ll be honest that these aren’t the kinds of stories that ‘excite’ me as a parent because they’re all very similar and don’t have much of a plot (yes, I realize how snobby this all sounds, but I’m a book reviewer after all.) I Love You, Little One by Holly Surplice is another one of these books, and even though I roll my eyes through it all, I can’t help but appreciate the excited smiles on my kids faces as I read it.

When it comes right down to it, every kid (and adult!) loves to hear the words ” I Love You”, and when they are especially young, they need to hear it all the time for it to really sink in. So although these aren’t the most exciting books to read, they are an essential component of a kids library. This one in particular features two guinea pigs, a parent and a child of indeterminate gender (another hurrah for inclusivity!), and each page features the parent reacting to the child’s actions in some loving way; showing pride in the artwork they produce, tenderly wiping their face, baking with them in the kitchen, etc. Now that I have both a boy and girl, I especially appreciate these gender-less books because I read to them at the same time and they both feel equally included.

The illustrations are bright and colourful, the book is sturdy with a puffy cover, and there’s just enough text on each page to keep my 4 year-old interested and my 21-month-old engaged. Bonus points for the dialogue that discusses the fact that the love is always present, even if the parent isn’t; this is important for kids to hear, especially when they have two working parents.

For those who read my Christmas book round-up for kids, you’ll recall my love of the Crayon series by Drew Daywalt and Oliver Jeffers. Their Christmas book is fantastic, and remains a new favourite of my kids. So you can imagine my disappointment in Love from the Crayons. which is basically re-purposed images from the first book in the series with some inconsequential text like “Love is purple, Because love has its own imagination”. The majority of the story doesn’t make much sense, and most of the pictures have been used before. The entire thing is…unfortunate.

I understand margins are small in publishing, and when you come up with a money-making hit like The Crayon Series you want to pump it for all its worth. However, there needs to be a line, and this book is so obviously trying to capitalize on past successes that it’s totally missed the mark with this latest offering. It comes across as an afterthought, and I’m really disappointed with it, as was my oldest, who usually laughs hysterically at the crayon books. This Valentine’s book was met with silence and a request to read something else; enough said!

I’ve saved the best for last: Teddy Bear of the Year by Vikki VanSickle, illustrated by Sydney Hanson. Touted as a ‘modern-day twist on the Teddy Bear’s Picnic’, it stars Ollie, a loyal stuffy who loves his human, and who gets the opportunity to attend a Teddy Bears’ Picnic one magical evening. When he shows up he meets a bunch of other bears who have all accomplished some pretty impressive things, like overnight hospital stays with their humans, so Ollie begins to feel a bit ordinary. Then, he actually wins Teddy Bear of the Year, because of all the small but impactful tasks he performs so consistently, like the “ABCs of teddy-care. Always Be Cuddling”.

The illustrations in this book are really well done, even though most the story takes place in the middle of the night, the dark ‘filter’ on everything highlights the beautiful jewel-tones of the bears’ fur. This twilight quality also makes it the perfect book to read before bed. And even though kids won’t notice this, adults will certainly see the parallels between the Teddy Bears’ Picnic and a typical work retreat. The message highlighting the importance of consistency is a subtle one, but it’s relevant for all age groups, and I must confess I felt a relaxing sense of confirmation after finishing this book. My daughter simply loved the idea of her stuffed animals living their own secret life once she went to sleep, so this book is a true crowd pleaser.