Book Review: All I Ask by Eva Crocker 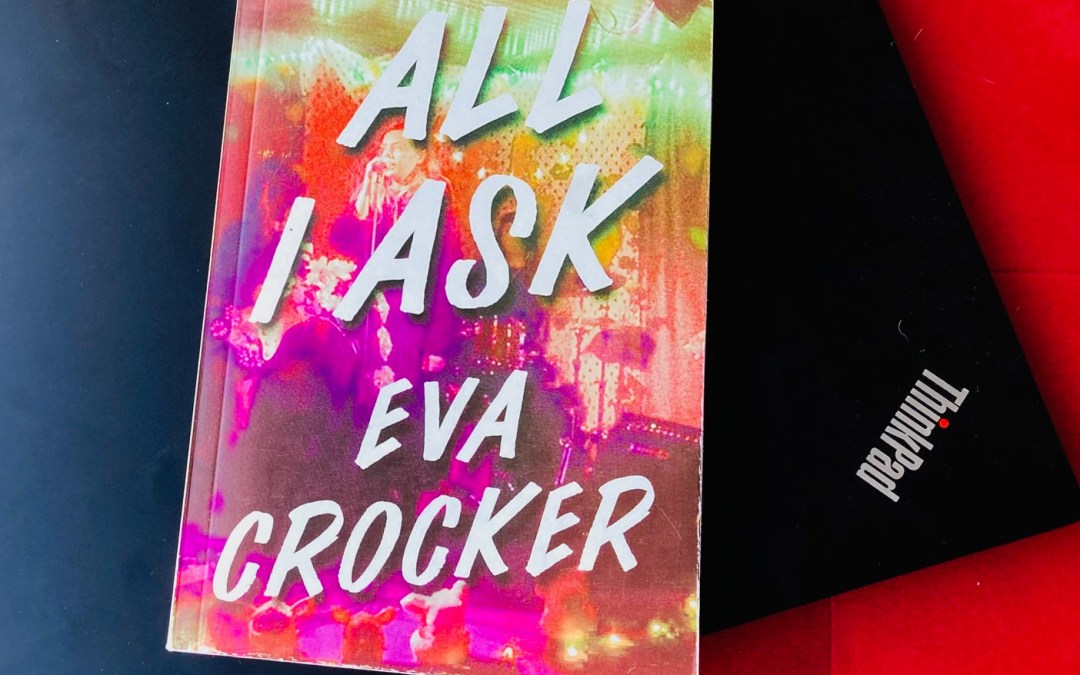 I knew going into this book that it would be about being a young person. As in, the life of a 20-something with no kids, a part-time job, renting with friends kind of story. As a 30-something, I get a real kick out of reading these kind of books. Because I moved in with my boyfriend (now husband) fairly young, always had a steady job, bought a house well before we were married, etc. I also like to read these books as a way of observing what my life could have been like if I hadn’t chosen the path I did. The characters in All I Ask by Eva Crocker are all so different from myself and my close group of friends in that they seem much more wild and carefree, although, would someone in their thirties look at me and my friends in our twenties and say the same thing about us? It’s all about perspective, which is an underlying theme to this book. When we are still growing and learning about ourselves and our place in the world, it tends to be our friends that have the most impact on the way we see things. Crocker’s debut novel centers mainly on these friendships and their power to direct our lives.

Stacey is a young woman living on the east coast of Canada. She has a part-time job at a local theatre, dreams of becoming a serious actress, and finds herself in romantic relationships with both men and women. She has a best friend Viv who she’s lived with for years, but when Viv wants to get her own place with her boyfriend, Stacey is forced to move in with another young woman, Holly, who she likes but doesn’t know all that well. One morning Stacey is woken up by a loud banging on the door and police barging into her house and confiscating all laptops, phones, and hard drives with a warrant based on finding illegal digital material. Shaken up by the encounter, we follow Stacey through the next few weeks and months of her life as her relationship with Holly crumbles and the aftermath of the police intrusion destroys her self-confidence. Her parents, girlfriend, and friends all have a different opinion of what Stacey should do about this intrusion on her privacy, but Stacey struggles to decide for herself what she truly wants to do. Filled with flashbacks, this novel is told only from Stacey’s perspective, but her individual relationships all combine to create a fully fleshed out character that we feel we’ve come to know intimately once the last page is turned.

Sometimes Stacey would do something that shocked me, like shoplifted, or crunched someone’s glasses underneath her foot because she was mad at them. And then other times she would be so incredibly focused on the politeness of her language – she reminded Viv to not use the word ‘crazy’ because it was “ableist”. She had two cats named “Snot” and “Courtney”, and was perpetually aware of the neighbors that lived next to her house, the church parking lot and the smokers on the steps beside her. Like any woman her age, she went out and partied often, but she still looked forward to coming to see her parents, helping them at their annual Christmas party and holiday shopping with her Mom who had a bad back. The dichotomies of Stacey’s character is what made her so interesting, I always delighted in being shocked by her behavior, because she was a complicated person I wanted to continue getting to know and reading about. It’s for that reason that I felt a bit let down once I finished the book, because I wanted to continue trying to figure her out.

Aside from the strange police investigation that Stacey seems to be a victim of (it’s clearly a misunderstanding, and related to the previous tenants of their house rental), there aren’t many plot points to recall here. Stacey is basically living her life, getting excited about certain things like landing new acting parts and meeting a new woman she really likes, and dreading other things, like going to the police station to pick up her stuff and feeling intimated by a man with a weird mustache while there. It all sound a bit ordinary, and some readers may find this book boring, but I really enjoy reading about everyday occurrences, and this book is the epitome of ‘character driven’. Crocker is a talented writer, one of the my favourite quotes that every cat person can relate to:

I took the cat food out of the cupboard and the animals started mewling. The smell of tinned meat farted out of the can when I peeled the lick back, bringing my hangover to life (p. 39 of ARC).

It’s a gross quote, but also so relatable! There are many turns of phrase that I reveled in, re-reading them a few times before continuing to move on.

This book won’t be for everyone, but for those who like to settle in with complicated characters, All I Ask is perfect for those slower introductions to a new fictional ‘someone’ in your life.