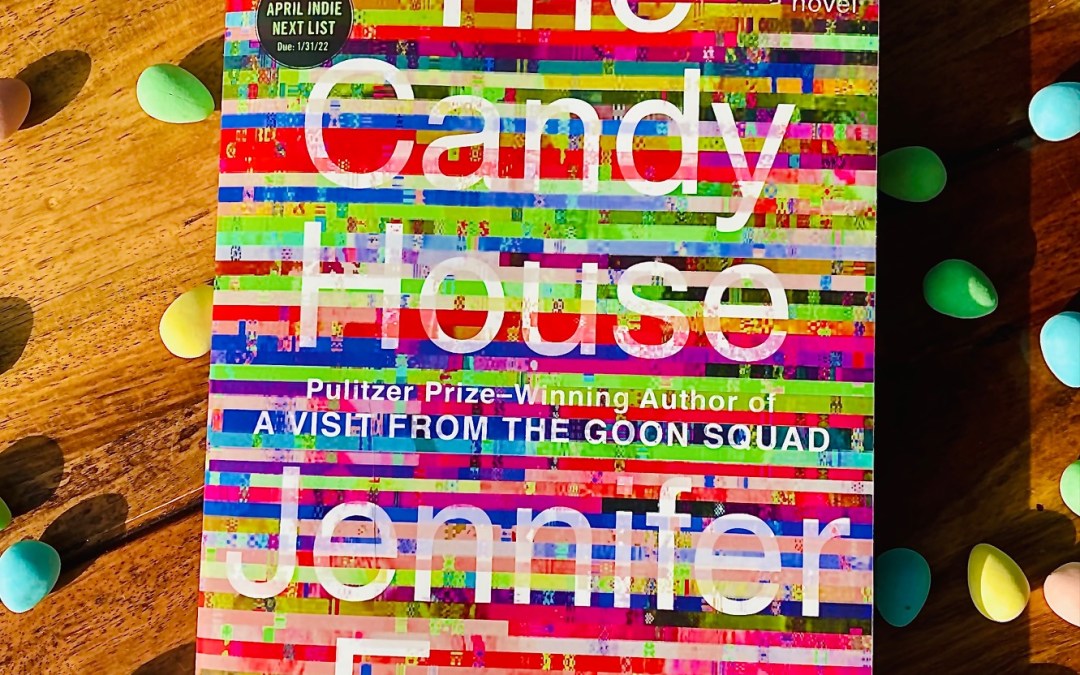 Right off the bat, just want to warn you all this book is NOT about candy, or treats of any kind (disappointing, I know). The Candy House by Jennifer Egan is a warning wrapped in multiple layers of story. The candy house in the title is referring to a few different things, mainly the promise of a cache of riches – the literal candy house in the tale Hansel and Gretel, or for many of us today, the unending possibilities of the internet, and the collective conscience in this book. It is all too good to be true, which for those of us with any sort of social media literacy at all can see – the downfalls of our connectedness are starting to overwhelm the benefits. Just like the cover of this book, there is a lot going on in-between the pages, and I think it would take me a solid re-read over the course of one day to fully appreciate what’s been written here.

Trying to summarize a plot like this will inevitably lead to confusion because every single section and chapter is about an entirely new person, some with somewhat vague ties to the characters who came before. Sometimes the person at the center of the chapter is a cursory character mentioned offhand in the chapter previous and it isn’t until the very end of the book that we begin to see consistent reappearances or connections from earlier. We go back and forth through time, from the 1960s all the way to the 2030s, during which something called the “Own Your Unconscious” has been invented and commercialized. It’s a new kind of technology wherein people are able to download their own thoughts and memories into a little cube, and if they choose, upload it to the collective unconscious so others who have contributed can download their thoughts – essentially everyone sharing their memories together. We meet the inventor of this technology, his family members, those who learn about their parents through this technology, those who profit off it, those who fear it, etc. Interestingly, not every chapter is specifically about this invention, instead, it may play a role, but these stories are more so about human connection and the circumstances of one’s life outside their own conscience. One thing each section had in common was its incredible characters – I wanted to follow every person for their own entire book they were each so compelling.

The busy cover of this book mirrors its contents perfectly – the numerous plots all intertwine to create a disjointed, colourful, and cramped narrative that’s overflowing with stories. Although the book feels literary at its core, it also incorporates a multitude of genres; sci-fi, action, even humour. One chapter is told entirely in emails all about an aging actor with an affection for speed boats, while another chapter details the daring escape of a trained spy desperate to return to her husband. Although these quirky situations were fun to read along with, I much preferred the slower chapters that followed the normal-ish people; the challenging legacies of parents seemed to be a common theme, as well as the struggle to maintain a sense of routine or happiness when mental health issues inevitably arise. There were a few off-hand mentions of pandemics limiting people’s movement for shorter periods of time, which makes me think we’ve entered that stage of Covid where we can start referring to it in past tense (although it depends who you talk to and what part of the world you live in).

The range of Egan’s writing is impressive, and each story she relates is fascinating when considered on its own merit, but my only issue with this book was the vast number of stories made it difficult to keep the narration straight in my mind. A family tree wouldn’t be enough; the web of connections between each character is far too complicated to reasonably map out as a reader. Still, I would still recommend this book if only to enjoy the incredible people she introduces us to; the man who screams in public for the attention, the woman desperate to reconnect with her famous father, the overachiever who falls into a drug addiction, the teenager who resents her best friend’s ability to shut off the taps of their friendship whenever the mood strikes her. As soon as I would begin to settle into a story, getting comfortable with the setting and tone, the chapter would end and we’d be whisked away into another world – always based in reality, but because it was always someone else’s reality, it felt different.

The publicity materials for this book suggest it makes a larger statement about technology, but that wasn’t especially obvious to me. There is a running commentary about the cost of tech in our lives, but it didn’t stand out. Instead, what gave me pause were small moments of humanity, demonstrating the beauty of Egan’s writing more than anything:

“One horror of motherhood lies in the moments when she can see both the exquisiteness of her child and his utter inconsequence to others. There are so many boys in this world. From a distance they look alike even to her, especially in uniform.”

Reading this made my heart ache, mainly due to the bare truth of the statement-many parents will relate to this.

So perhaps I missed the point of this book entirely, but I found its gems in alternative places. Just beware; there’s lots to distract you along the way.