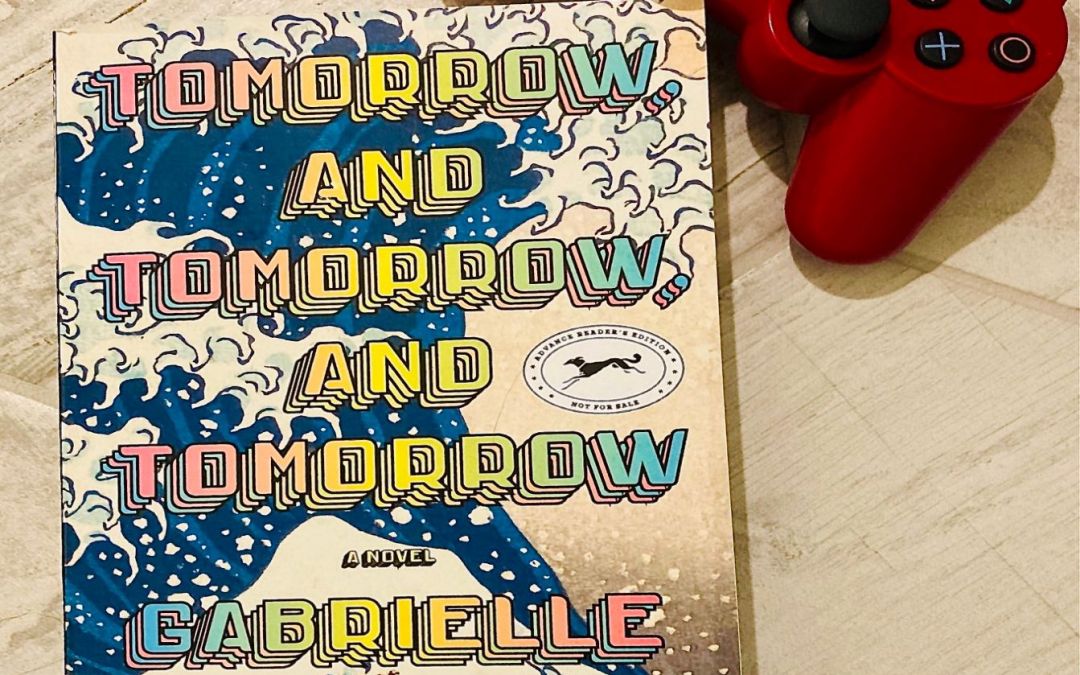 I did not request this book, I did not pick it out of a publisher’s catalogue. Instead, it landed on my doorstep, and when I realized it was all about video games and the people who make them, I was…less than enthusiastic. Still, its focus fit the theme of a CBC segment I was recording all about different worlds so I decided to read Tomorrow and Tomorrow and Tomorrow by Gabrielle Zevin, despite my suspicions it would be more of a YA romance novel than the literary fiction it claimed to be. I’m happy to report I was completely wrong about this book, and I unfairly judged it without knowing or anticipating the incredibly powerful writing it contained. This ended up being a 5-star read for me, and I miss the characters now that I’m done reading about them.

Sam and Sadie meet in a hospital playroom as preteens. It’s the 1990s, and this room has a video game console. They strike up a deep and satisfying friendship by bonding over video games while Sam is in the hospital, his foot healing from a serious accident and Sadie’s sister is recovering from a childhood cancer diagnosis. They reconnect in college, one at Harvard, the other at MIT, and they decide to design a computer game together which becomes an instant success. As they move through their 20s and 30s, their relationship constricts and contracts, vulnerable to the various moods and conflicts the two experience. They both suffer from different maladies; Sam’s foot has never healed properly, held together by metal rods that constantly give him pain. Sadie suffers from depression, and is held emotionally hostage by an older professor that she has an affair with, unable to leave him even when he hurts her. Both escape into the world of video games to find success and comfort, and ultimately, find their way back to each other through the virtual worlds they are so adept at creating.

I’m struggling to pinpoint the specific elements of this book that made me love it so much. The characters of Sam and Sadie aren’t all that likeable – both are selfish and self-absorbed the majority of the time, coming together at the urging of their roommate and eventual business partner Marx. In fact Marx is the only redeeming character of the bunch, he’s unexplainably nice and generous, but their chemistry when all together is undeniable and enviable. The plot contains unexpected high notes and pitfalls. I was quite shocked by some of the developments, so at times I found myself unable to put down the book, even though it was late at night and I was ready for sleep. Despite not liking Sam and Sadie as people, I found I wanted to be around them more, and was constantly hoping for a happy ending for them both. When I finished the book I felt that specific sadness only avid readers can identify with; missing the characters you just finished spending time with, wishing you could ‘see’ them again.

As I mentioned above I had gotten the sense this book was written for a younger audience, mainly because the author had written YA before, and I was getting very “John Green The Fault in Our Stars” vibes from it all (despite admittedly, never having read that book), but I was pleased to discover this book felt tailored to someone my age. The narrator is omniscient, and will reference moments in the future on a regular basis that places a person clearly on the timeline of technology and its developments in the 90s and early 00’s:

“The day after Christmas, Sam send Sadie the following email…She did not immediately reply, the fact of which did not trouble Sam. In those days, a person may not be able to check her email when she was away from school.”

Remember those days? When our email was only accessible via computer, and we didn’t have smartphones yet so it was socially acceptable to spend days or weeks without replying? It’s little references like these that made my 37-year-old heart sing, because I am just old enough to remember those days. I also recall the floppy disks that make a few appearances in this book, as well as some of the computer game references like Commander Keen (a favourite of mine and my friend Megan during our March breaks). So yet another surprising aspect to this book was how relatable I found it, especially because before beginning it I assumed it would be anything but.

Although I picked up this book with hesitance, I am so relieved I read it because it’s likely going to become one of my favourite reads of the year – it pays to be adventurous and read outside your comfort zone!