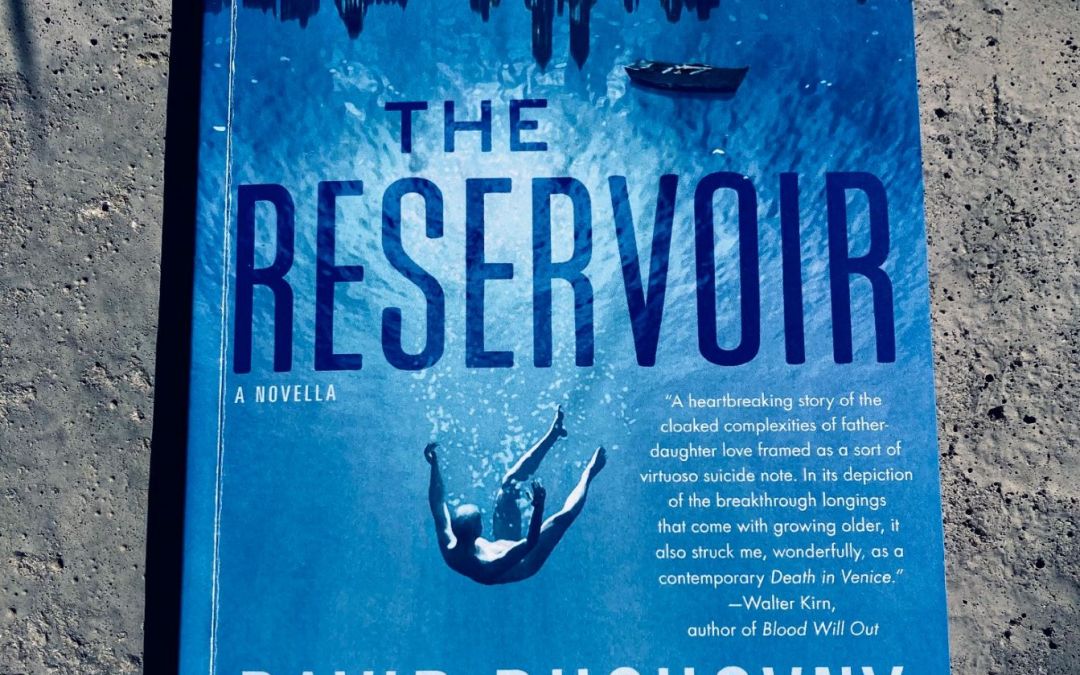 That David Duchovny? Yes, that David Duchovny. I read his latest release, a novella titled The Reservoir, but he has released three books before this, so I had high hopes that this wouldn’t be terrible. Books by celebrities tend to be held to a different standard; we don’t expect the same brilliance from them that’s required by a regular person to get a book published. Is this fair? Perhaps not, but it’s a simple numbers game for publishers – people will buy this book regardless of how good it is, or how good its reviews are; they will buy it because they loved X-Files in the 90s and want to see what kind of a writer Mulder is. Am I one of these people? Absolutely, I loved X-Files too. Sorry not sorry.

The Reservoir is a novella so there isn’t much room to build an intricate plot in its 125 pages. It’s about a divorced, middle-aged man named Ridley, and we meet him in the first few months of the Covid pandemic before the vaccine had been distributed. He lives in an apartment with a beautiful view that overlooks the reservoir in Central Park in New York City, having made some decent money on Wall Street before retiring. He hasn’t seen his adult daughter in awhile as they argue often, and she’s worried about spreading the virus as she has young kids. He is incredibly isolated, barely going outside, and ordering in meals and food only, with virtually no friends to talk to or visit. He’s been taking time lapse video on his phone of the park at night, a little creative project that he seems excited about, but he notices that one building across the park has been flashing their lights in the middle of the night in a sort of morse code. He forces himself to wake up at 3am to see the lights and reply in an effort to connect with and eventually meet the person who is signaling to him. This attempt at socialization devolves into a few dangerous forays into the darkest parts of Central Park, including an extended scene in the reservoir itself. Ridley suspects he may have caught Covid, but doesn’t feel unwell so avoids taking the medication he orders from the doctor.

I rarely have high hopes for celebrity authors (see above), but I was pleasantly surprised at how thoughtful this book was. It depicts a side of the pandemic that many older people endured; an incredible sense of loneliness. But there is an element of horror depicted in this novella; the slowing down of time, the overwhelming sense of fear and anxiety of what lay outside your own four walls, and the pain of having to avoid your loved ones even when they lived close by. Ridley experienced what many did, but he’s privileged enough to stay inside where he feels safe, which many were not lucky enough to do. Unsurprisingly, much of the book happens inside his own head. One of the topics of thought he often returns to is what to call his art project, which comes across as incredibly vain and self-indulgent, but what else is there to do?

Speaking of self-indulgent, my only criticism of this book is the unnecessary amount of metaphors and descriptions. It couldn’t just be a building, it was a “miracle menorah of a building” (p. 40 of ARC). The amount of similes in this novella is simply uncalled for, but once I finished rolling my eyes, I found myself drawn into Ridley’s life, truly unsure of what was going to happen next. I thought I had a strong grasp of Ridley’s reality until he remembers a moment of terror from decades ago – he got caught up in a tumbler of a wave with his young daughter and almost lost her in the current. Us readers were also tossed out to sea, losing all sense of what’s up and what’s down, what’s real, and what’s imagined.

This novella is also a great example of why characters don’t have to be likable. Ridley is the only character we get to know in this story, we see everything from his perspective, and he’s a jerk. He’s petty, fighting over something silly with his daughter, seemingly unwilling make any effort to speak with her or his grandkids, his only family left. He’s pinned his hopes on a stranger and their hard-to-decipher code, while he sits in his apartment and exaggerates his own personal challenges in the face of human tragedy all around him. And yet – I still cared about what happened to him, and I still cringed when he knowingly entered a dangerous situation. This isn’t an accident, it’s a sign of good plotting, which is the strongest part of this novella. I’m not entirely convinced Mulder is headed for writing infamy, but I enjoyed this short read which means I’ll keep an eye on whatever book he releases next.