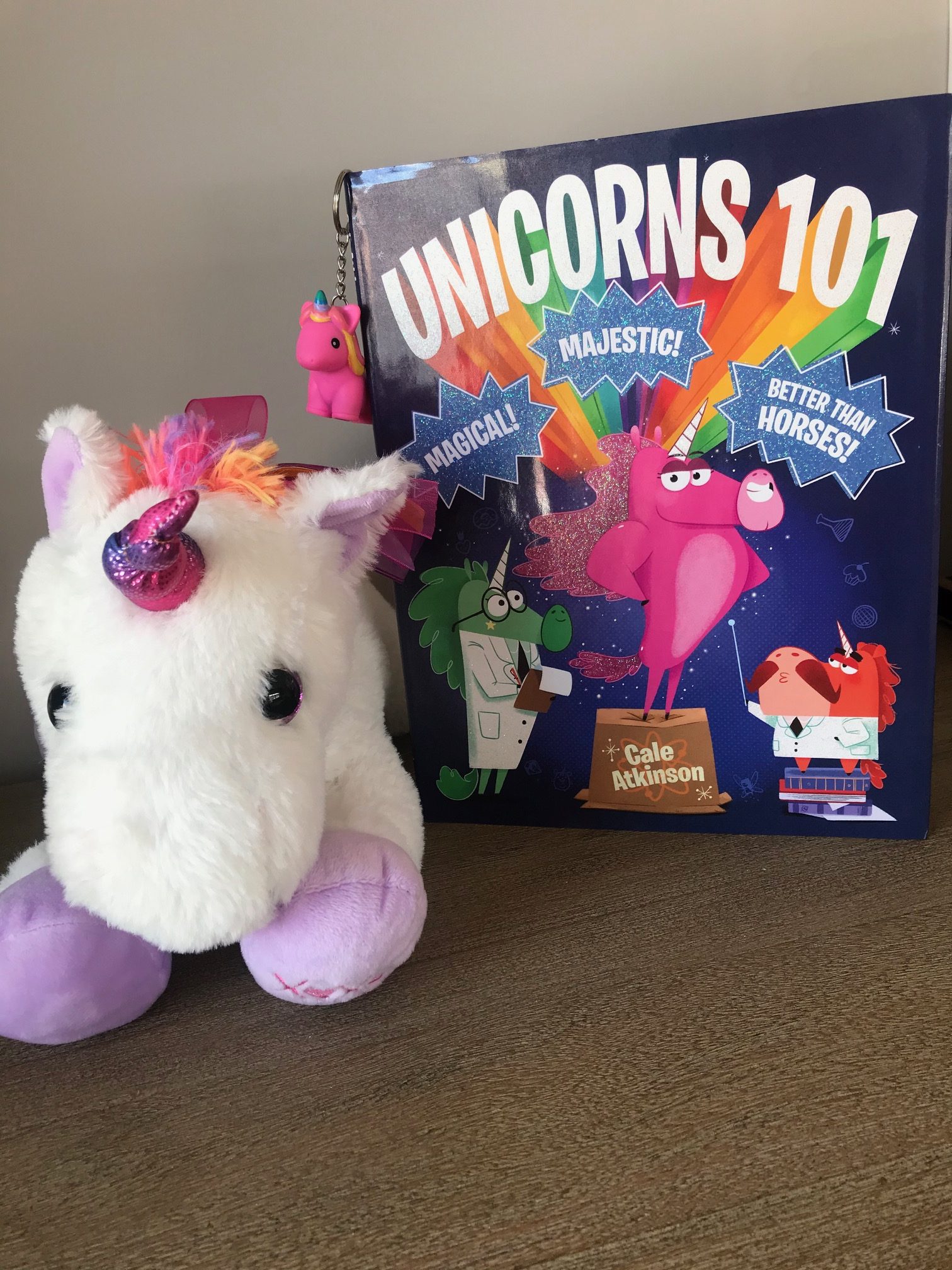 I’m not sure where the unicorn trend started. Was it with the advent of bright colours and sparkly accents to little girl’s clothes? Is it an extension of the popularity of My Little Pony? Was it when we started putting blow-up unicorn horns on our cats (or was that just me?). Regardless of its origins, unicorns are pretty much everywhere right now, and publishers want to get kids reading, so they’ve jumped on board the magical bandwagon too. Today we’ll look at two unicorn picture books that have made their way onto my kids’ bookshelf.

When Unicorns Poop by Lexie Castle, illustrated by Christian Cornia is a book about unicorns and their bodily functions. It explains that unicorns poop rainbows, sneeze sparkles, spit chocolate syrup and fart shiny bubbles. There are lots bright colourful illustrations that depict neon-haired unicorns of every shape and size looking quite proud of themselves after they’ve expelled something, while children dance around in glee. In case you haven’t figured it out already, this book is shallow without much point to it, but regardless of what I think, my 4-year-old loves it. Sparkly font on the cover? Check. Potty talk with silly pictures? Check. A liberal use of rainbow colours throughout each page? Check. Although I give an internal, disapproving ‘hrmph’ whenever I read this aloud with her as I’m unable to ignore the pointless plot and accompanying text, she returns to it time and time again, so clearly I just need to suck it up and stop be such a ‘disapproving Diana’ about it all. “Get over it Mom” is basically all I need to remind myself about this one, at least they’re reading! On a somewhat related note, why are poop emojiis as kids’ toys still a thing? Ugh.

Unicorns 101 by Cale Atkinson is a great example of a unicorn book that’s more than rainbow fluff. I love Cale’s books, they’re like a Pixar movie in that they’re funny for both kids and adults alike, and although they tend to be a bit longer (in text and page number) my kids still enjoy them. Because publishers aren’t fools they’ve used glitter and rainbows to amp up the curb appeal, but there is a story line in addition to the cheap tricks used to lure in children. It’s about unicorn scientists who research fellow unicorns, and each page is devoted to the basics of unicorn knowledge like “the horn of the corn”, “diet and digestion”, and “unicorn history”. So very similar to the Unicorns Poop book, but thankfully this one isn’t solely dedicated to potty talk and burping.

Atkinson knows that bodily functions aren’t the only things that make kids laugh. Case in point, the names of his unicorn researchers are: Professor Glitter Pants, Sprinkle Steed, Star Hoof and Sugar Beard! See, all names that are funny, but won’t embarrass me as a parent when repeated in public. It’s a win-win! And using one’s imagination is top priority here, as it should be when writing a book about a make-believe animal like unicorns. The wealth of information you’ll learn about unicorns is entertaining and enlightening: their weight is measured in gummy bears, their mane smells of cinnamon, and you can tell the age of a unicorn by counting the rings on the horn, among many other things. There’s even a hall of fame for famous unicorns throughout history, my favourite being “Jolly Fancyhooves, the first unicorn to wear clothes”. The end of the book includes a ‘diploma’ declaring the reader an official unicorn scientist. The humour in this book is obvious, but it’s also something that a teacher could read aloud to a class and not get sent down to the Principle’s office afterwards for doing so — now that’s my kind of book!