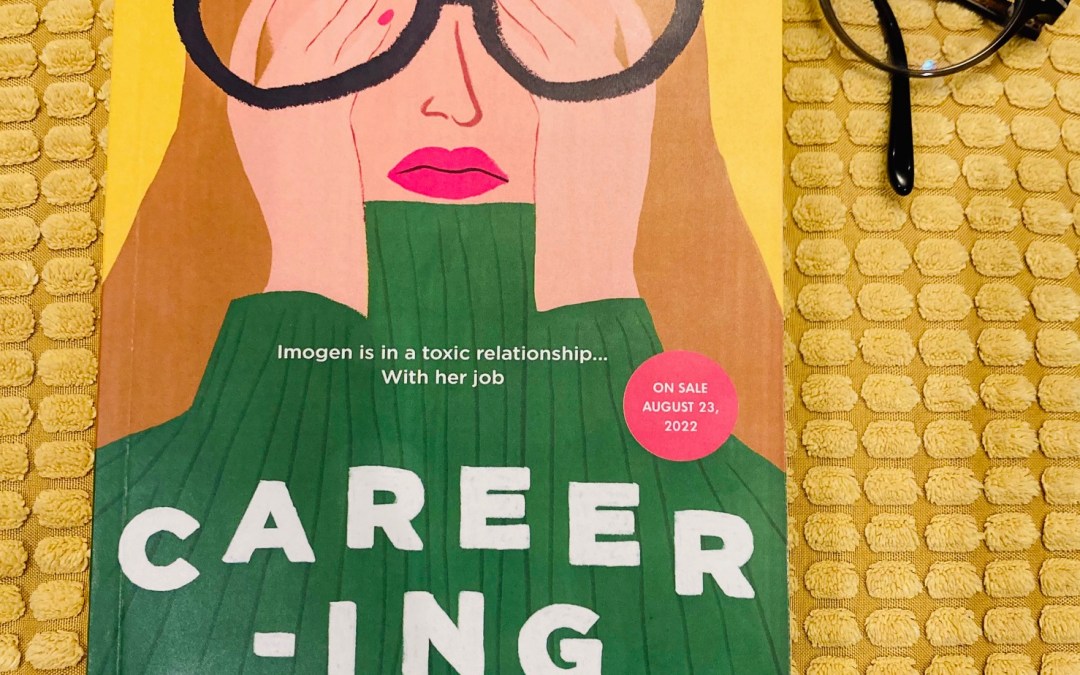 It was pure coincidence that I read this book during a particularly busy time at my day job, but while Careering by Daisy Buchanan is all about a thankless pursuit of a dream career that doesn’t exist, I’m lucky enough to work in the un-glamourous but particularly fulfilling industry of non-profits and charities where I raise money for those who need it. So even if I do have a busy time at work, I’m not miserable because I know it’s for a higher purpose, and I love the people I work with. Anyway this isn’t a post about my career, it’s about this really funny book that made me laugh out loud and remember why having a job you enjoy is so important, but more importantly, loving yourself regardless of what title you hold is truly the goal.

Imogen is 27, broke, living in London and chasing after her dream job of being paid for her writing. She has a blog about sex toys that has a fairly healthy readership but it doesn’t pay the bills, so she’s been working part-time jobs and interning at fancy magazines to build up her resume. Imogen’s boss Harri is moved from her fancy editing job at fashion magazine Panache to launching a feminist site called The Know. Harri asks Imogen to join her there, but the budget is so tiny that even though Imogen is working more than full-time hours, she’s drowning in debt, barely able to afford decent food to get her through her own workday. Imogen is discovering that the magazine and publishing industry is entirely supported by kids with trust funds who can afford to ‘intern’ for free, and a revolving door of editors who are thrown out as soon as their numbers show any kind of decline. Meanwhile, she is working herself sick trying to break into this industry. She is constantly asking herself ‘is it worth it’?

I picked this book off my shelf mainly because of the cover. It looked funny, and I was in search of a lighthearted read after finishing the seriously shocking book I raced through beforehand. True to its genre of contemporary women’s fiction (chick-lit) there was a clear problem, a funny narration, some glamorous elements, a tiny romantic storyline, and thankfully, a clear resolution. Being a sex columnist, Imogen wasn’t a relatable character for me (books are far off from what she typically reviews!) but she was still an incredibly likeable, realistic woman that many readers would likely find much to enjoy alongside. Another element that would likely strike a chord with a wide group of people, especially these days, is the fact that all of Imogen’s co-workers (except for management) had ‘side-hustles’, something I’m finding more and more common due to the new e-commerce opportunities available on the internet. And with my contract for radio and tv, I can definitely relate! Like Imogen’s attempts at writing for a living, so many entry-level jobs aren’t full-time at all, they are contract, with little to no stability and no benefits, so these part-time money making schemes are a necessity for many to survive. Sadly, here in North America, jobs with benefits are also becoming scare in particular industries, so Imogen’s problems in this book are the reality for many.

Although this book raises many serious questions, it is also VERY funny. Buchanan’s voice is direct and blunt, venturing into taboo topics through Imogen’s blog and life. Both Harri and Imogen are a source of humour, and both have very inner thoughts that only the reader is party to:

“I wish I had some nails left to bite. My stomach gurgles, and my whole body tenses. Please don’t let the first sound I make on live television be a fart.”

-p. 136 of ARC of Careering by Daisy Buchanan

” ‘ Just been to see our big boss, Mackenzie. She’s…’ Harri reaches for a word she doesn’t know, a code word, something that sounds ultra professional while making it very clear that Mackenzie ought to die in a fire.”

-p. 93 of ARC of Careering by Daisy Buchanan

This book was just what I needed; funny and light, full of female empowerment with a hint seriousness that left me feeling like I had spent my time wisely reading about Imogen and Harri’s lives. It also made me grateful for my own full-time position and reasonable job expectations. I can’t say many books have had that affect on me, so for that reason alone I recommend picking this one up.