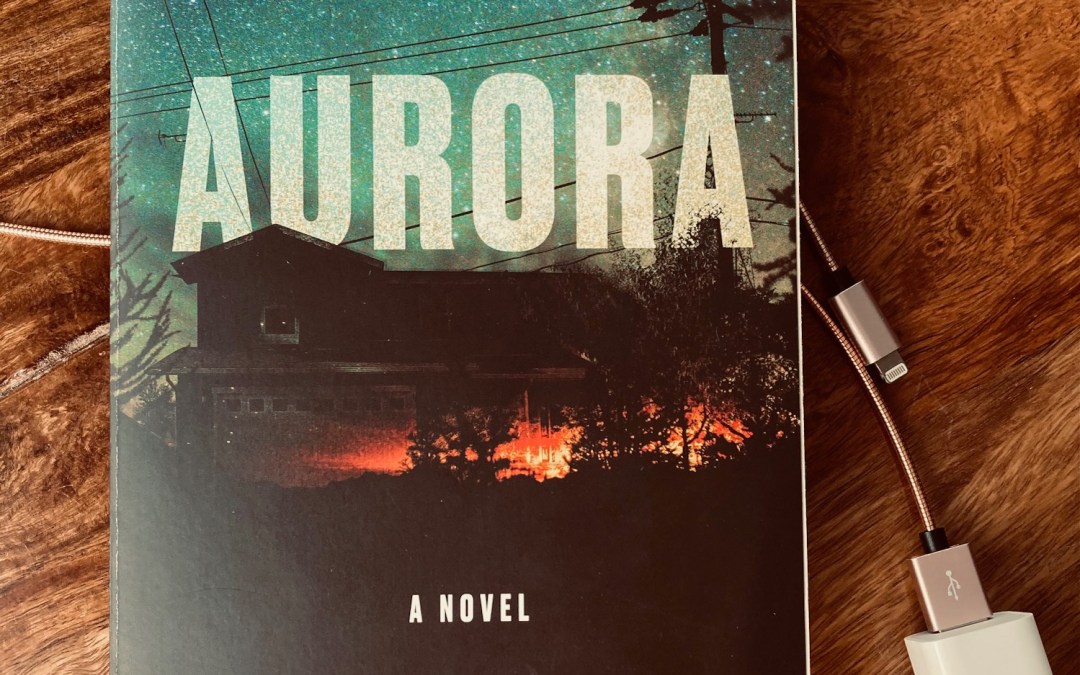 I don’t like watching dystopian films – I cringe all the way through the movies that depict our last few days on earth due to some asteroid, climate event, or alien invasion because I’d rather not watch something so hopeless. But I don’t mind reading a dystopian novel, often because the narrative will be focused on the internal reactions of characters, which I find much more bearable. Aurora by David Koepp was written by a screenwriter; apparently he wrote the two Jurassic Park films, and his talents are obvious in the writing of this novel not because it’s cinematic, but because the pacing is PERFECT for keeping one’s attention.

A major solar flare has hit earth and knocked out power in first world countries with highly-connected electrical infrastructures. Hours before the flare hits, we meet Aubrey and her teenage stepson Scott, who was left behind by his petty criminal and drug-addicted father Rusty a few months ago. Although Aubrey isn’t his biological mother she’s committed to keeping Scott safe and on a healthy path, and both are happy to have left Rusty’s dangerous clutches. Halfway across the country we also meet Thom, Aubrey’s brother who is fantastically wealthy, and has been planning for an apocalypse of some kind for years. When the flare hits he activates his emergency plan and moves his family to a well-equipped mansion of a bunker in the desert with a selection of staff, including a yoga instructor who he’s also had trained in hairstyling so she can provide even more services while hunkering down. Thom and Aubrey share a childhood secret that has strained their relationship, and she refuses her brother’s offers to join him in his bunker. Unsurprisingly, Thom’s plans aren’t working out as well as he had hoped for, and Aubrey hasn’t seen the last of Rusty and his conniving ways, both matters making a natural disaster even more difficult.

There were a few themes that ran throughout which I found unique enough to highlight. The first is that drug addiction seemed to rear its head in multiple character, in both the past and present. One of Thom’s staff who we get to know briefly had one sibling lost to drug addiction years ago – actually lost, everyone stopped hearing from him completely. We also come across people struggling with a meth addiction hiding out in a gas station completely oblivious to the disaster happening outside. Drugs and alcohol are also the reason for Rusty’s failure, made even worse by the fact that he once had a happy marriage and promising career. A few weeks after the power goes out, Aubrey and Scott are forced to make do with the little medication they have left, and eventually Aubrey flushes all her anti-anxiety meds down the toilet. I’m guessing there wasn’t a black and white message meant behind all these drug references, other than the fact that drug dependencies were much more common in middle America than people care to admit.

Generosity is another theme I continued to return to throughout my reading of this book- the lack of it in some cases (mainly Thom’s) and the abundance of it from people who had very little to give in the first place. Aubrey is a generous person by anyone’s standards, but when compared to Thom, she’s practically a saint. Her positive attitude is what helps her build connections during the blackout, and in many instances she often feels as though her life has improved since the solar flare. Generosity always seems like the first thing to go during a disaster (just look at the awful people who hoarded toilet paper at the beginning of the pandemic) but this book was a nice reminder of the beauty of those who give regardless of their circumstances.

I originally chose this book from a publisher’s catalogue because I was curious about the premise – a major solar flare is something I hadn’t come across before, and as I mentioned above, I don’t mind a good dystopian novel. But I was truly impressed with how much I really enjoyed it. I hated putting it down because I was desperate to find out how Aubrey was faring in her cul-de-sac turned farm, while best-laid-plans slowly crumbled around Thom and his world of luxury. Aubrey was obviously the sympathetic one, dealt a difficult hand and trying to make the best of it, while Thom resented every hiccup in his plan, including the hired help’s desperation to bring family members along with them to safety. He doesn’t elicit any sympathy, and his increasingly irrational reactions only villainize him further, until a surprise ending cleans up most of the plot’s loose threads, much like a major motion picture. It’s a quick read that would pair well with popcorn because it felt like going to the movies.