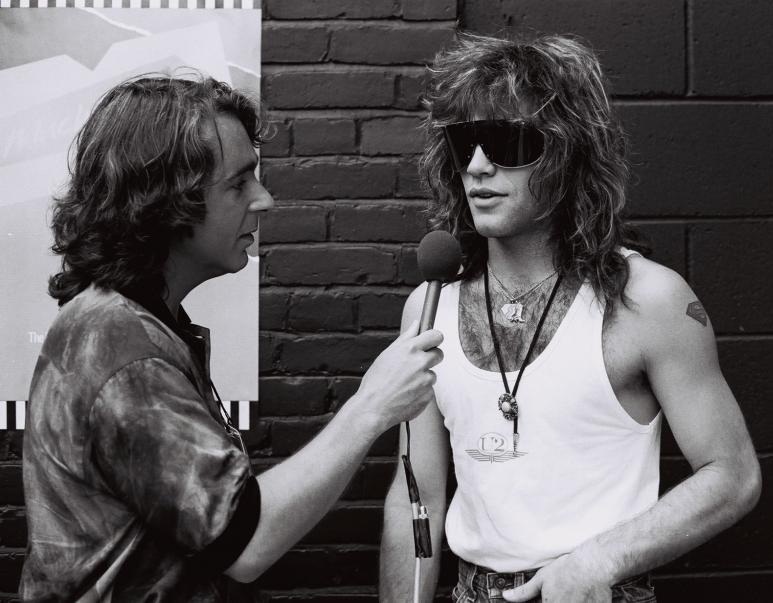 Do you recognize the two men above? The shaggy head with the over-sized sunglasses is none other than Jon Bon Jovi, but that’s not who I’m interested in here-the other man, Christopher Ward, was the original MuchMusic VJ, and the writer of the most recent book I just finished titled Dead Brilliant. Oh, and he also wrote the iconic song Black Velvet, as well as a bunch of other songs that pop stars such as Hilary Duff, The Backstreet Boys, and Diana Ross have sung. Although hard to believe that those sunglasses are somewhat in style these days, what’s even harder to believe is the fact that Christopher Ward was the original VJ. Everyone who grew up in Ontario  wanted to be a Much VJ, in fact they still have contests each year to find the next VJ, although many of the people who win that competition end up falling into obscurity faster than your typical reality star. Christopher Ward is a successful musician and songwriter in his own right, without the VJ cred to bolster his resume, but he’s also added ‘author’ to his list of successes.

Is this a case of a famous person trying to extend his career even further by dabbling in the publishing industry? If anyone has a book in them, it’s this dude, right? Well, he’s written three books actually, all published by Dundurn Press, so he must be doing something right. This book was his first for adults, but I enjoyed it, mainly for the glimpse it gives the reader into the cutthroat world of showbiz.

The protagonist of the book, Roc Molotov is loosely based on Ward himself-Roc wrote the song “Black Velvet” as well, and both men are known for their talented songwriting. However, Roc feels his career is entering a dry spell, and looks for a way to revive it without selling out like all the other musicians around him. So, his slimy manager cooks up a scheme for Roc to fake his own death in order to boost record sales, and it ends up working really well, allowing Roc to continue recording songs privately that he plans on releasing as his ‘lost songs’ after his fake death.

The tone of the book is fairly light, although there are some dark sides to the storyline, mainly found in the cruel intentions of the surrounding characters and the sad state of the music industry. I won’t claim that this is brilliant writing, some of the sentences and descriptions seemed a bit forced, however Ward has a perspective that we need more of: informed, entertaining perspectives on a fascinating industry and topic that people just love to read about. He literally ‘wrote what he knew’ and it ended up being a successful venture for him. I was thoroughly entertained while reading the book, and it was the perfect length (not very long being the perfect length in my opinion). So if you’re old enough to remember Christopher Ward and want to revel in his musical talent once again, listen to Black Velvet (this video is SO 80’s you will love it) and pick up a copy of a Dead Brilliant.