Some may already be familiar with this book; it was first published in 1976, and at the time, it was considered very controversial, although it still won the Governor General’s award for fiction that same year. It has been re-released by Penguin/Random House Canada in 2014, and although not as shocking as it was in the 1970’s, it’s still raising a few eyebrows even today. You’re probably dying to know what all the fuss is about. Very few topics are still considered taboo these days, but this novel deals with something that most find very uncomfortable (rightly so!): bestiality. 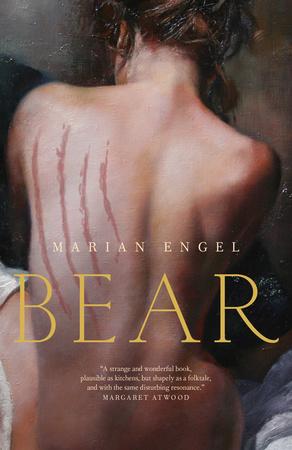 Essentially, Bear tells the story of Lou, a young woman who is sent on a field mission in Northern Ontario to catalogue the library of a wealthy, long-dead colonel. The isolated island estate she is staying on is mostly abandoned, except for a pet bear that remains tied up in a woodshed out back. Apparently he’s been there for many years, and is quite tame, but of course a wild animal still, so he remains secured by a leash. Eventually, Lou finds herself quite lonely, and begins to assign human qualities to this bear, striking up a friendship with him, letting him off his leash to walk him like a dog, etc. This friendship takes a turn about halfway through the book, and she begins a sexual relationship with the animal.

Ok I know what you’re thinking-“whoa there, this just got really weird”. Yes, I must admit I felt the same thing, and many people have this exact reaction. If you are indeed interested in reading Bear, my best advice is to familiarize yourself with other, similar books from the same time period by other female authors to help you understand the context of this book. I recommend reading Survival by Margaret Atwood, because similar to Bear, Survival deals with the idea of ‘what is Canadian’ by looking at ourselves through the lens of nature, and the rugged environment we inhabit (but frequently forget about) here in the north.

I won’t disagree that this book is strange, and at times, certainly unbelievable. However, I didn’t read this book literally, and I’m sure it’s meant to be taken as a metaphor or symbol, rather than literally, because there’s more to it than just freaky run-ins with a bear. Lou is an interesting character, and it’s obvious that she struggles in her relationships with men. She hints at being taken advantage of by a superior at her job, and a man forces himself on her later in the book because he felt he deserved some ‘gratitude’ from her for all his assistance up until that point. Clearly, her romantic encounters are fraught with aggression, and her connection with the bear is one of the first examples of her empowerment in the book. 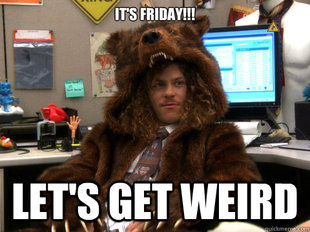 So, yes this book is weird, and I don’t blame friends of mine for resenting being forced to read this as a ‘can lit’ classic back in school. However, if you approach this novel with an open mind and read between the lines, you’ll find it’s deserving of at least half of the praise it has received over the years.