Delicious Foods: what a wonderful sounding title! Before I read the first page, I imagined this book would be full of tantalizing recipes and cooking stories mixed into a heart-warming tale of family drama. In reality, the story is nothing like this, but what I do want to stress is that the book is better than what I imagined, even if it’s far from feel-good.

Addiction plays a major role in the plotline, in fact, one of the three central characters is crack cocaine, otherwise known as “Scotty”. A major chunk of the story is told from the perspective of this drug, which is given human qualities. Like the poor souls who are addicted to the substance, we see and hear from this chemical as if it’s a cool guy who only has his friends’ best interests at heart. The other two characters are Darlene, the woman who falls into the addiction, and her son Eddie, the person (arguably) who is most hurt by “Scotty”. 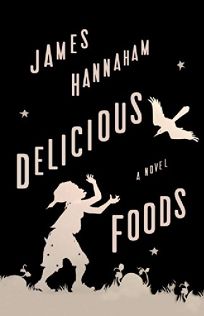 Delicious Foods is the name of a farm that Darlene is tricked into working for, where others like her are given easy access to crack, but basically treated as slaves and held against their will forced to do hard labour while there. What’s scarier than this premise is the suggestion that these farms still exist today, holding people in similar situations captive (or close to it) by taking advantage of their addictions and poverty. I eat a lot of produce, which forced me to beg the question: did the hands that pick my food also find themselves trapped the way Darlene and Eddie did? It could be naive of me to think that modern day slavery does not exist in North America (perhaps in third world countries it would seem more believable, of course no less terrible), but after reading something like Delicious Foods, I fear that we are turning a blind eye to this terrible industry right in our own back yard. If you watch the embedded video, you will see this was Hannaham‘s intent!

What I found even more painful than the evil farm and its handlers was Darlene’s mistreatment of her only son. Now that I’m a mother, even the slightest bit of child neglect is especially painful for me to read about. Her addiction to crack was fueled by the early loss of her husband, but even then, I still blamed her. Eddie spends his evenings searching for his mother on the streets late at night, talking to homeless people, prostitutes, and drug dealers in an attempt to find her. He is luckily (and unluckily) lead to her on the farm, at Delicious Foods, where he is submitted to the same kind of torture she is. The only difference between him and her is the crack: Eddie does not take it, therefore he is the most clearheaded one on the farm, as most of the workers are addicted to at least one substance, which is why they are there.

So as you can tell, this book is full of tragedy, although it isn’t all doom and gloom. There is a fairly redemptive ending to look forward to, and the story line is quite good, so it’s worth the read for sure.