Saint Mazie by Jami Attenberg is based on the life of Mazie Phillips, an out-spoken, big-hearted woman who lived through The Great Depression, helping those less fortunate in any way she could. Although she is referred to as a ‘celebrity’ in many places, not much is known about her, which is why this book felt like it was missing something for me.

Attenberg tells the story in a very unique way, including snippets of Mazie’s long-lost diary alongside people’s first hand accounts of their run-ins with Mazie. She also weaves in minor story lines of the people who discovered her diary years later, so there is no shortage of characters or perspectives in this book. The way the story is told is quite brilliant actually, it doesn’t give everything away, expertly creating the mystery around this woman while drawing the reader in with each entry, leaving us wanting more. 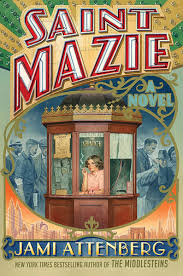 Saint Mazie focuses in on a few decades of Phillips’s life, presumably the ones that people know most about. After moving in with her older sister and husband as a young child, Mazie turns into a rambunctious teenager and young woman, going against what is typically expected of women at the time. In fact, I see her character as a young Carrie Bradshaw, playing out an old-fashioned version of Sex in the City. Mazie loves the streets of New York City, even more so than the numerous men she befriends during her late nights partying.

The dialogue is witty, and as mentioned before, the various perspectives are a nice change from the typical historical fiction I read, but I do wish there was more to the book as a whole. Perhaps my critique is unfair: Attenberg may have intentionally left big gaps in the narrative on purpose, as there is little known about Mazie. But I can’t help but think that more information or plot was needed to round out the story.  It feels as though a chunk of the narrative is missing; even if no resolution is possible or known, there needed to be more to make this a satisfying read.