Book Review: A Carnival of Snackery by David Sedaris 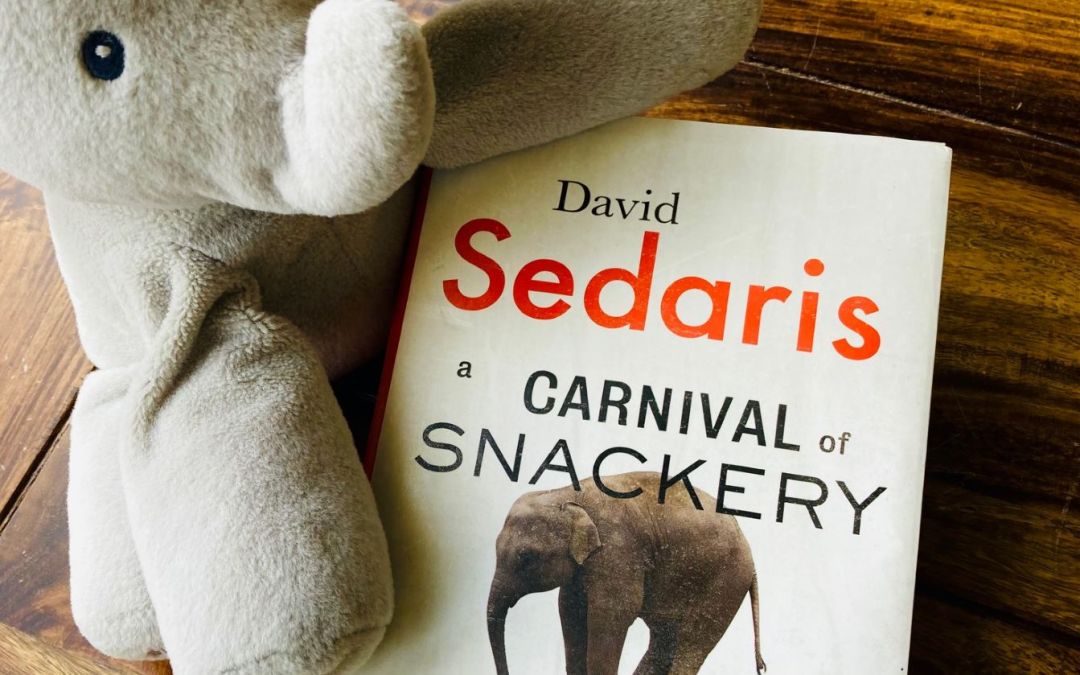 I had been saving the latest book from David Sedaris on my shelf for awhile, because I wanted to ‘treat’ myself to it when I was ready to enjoy my favourite author without interruptions. So when I managed to score myself a ticket to his Calgary show on February 27, you can imagine how delighted I was, and of course, planned to immerse myself in this (very big!) book around the same time he came to my city. I was about halfway through when I attended his event, and I brought it with me to read a couple of short sections while I eagerly awaited his appearance on stage. I’ve included the page he signed for me, which I adore. I mentioned that Anne Logan was my married name, which explains the inscription. I also told him that I used to plan literary events like this one, and he asked if I ever met some real assholes, and I replied that yes I did, and poets were by far the worst of them (sorry not sorry – I have some horrific stories to back up this claim).

A Carnival of Snackery, Dairies 2003-2020 is essentially a chronological look at his life from that time period, all in the form of his diaries. Most sections are brief, many are just a joke he heard from his book signing the night before, or a single observation from that week. I can guarantee that they are all hilarious, and I’ll include some quotes below for your pleasure. This time in his life covers a few major events, including the Trump years in the U.S., and the beginning of the pandemic. Sedaris has a new book coming in the spring and I know that one includes the death of his father, but at the very end of this one, his father contracts and survives Coronavirus, even though he’s 97. There is some overlap from his last book, The Best of Me, and I did recognize a joke or two from previous collections, but instead of being annoyed, I thought ‘this is just as funny the second or third time around as it was the first time I read it’. Despite these being taken directly from his diaries, the focus is typically on what he observes, we don’t often get stories from his personal life, but when we do, they are about his partner Hugh, or his family, which includes the also famous Amy Sedaris, who shows up in entertaining ways in this book. Every family member of his seems incredibly quirky, which makes for great fodder. But now that I’ve had the experience of meeting him in a signing line, I know David is actively mining his audience for humorous anecdotes too, and because people now expect this, many come with stories for him.

This could be a sign of my age, but I found his vocabulary quite ‘adult’ in nature, meaning he uses lots of profanity, even joking about murdering some people when they got on his nerves. It sounds terrible when I write about it like this, but within his stories, it loses some of its shock factor. Still, I did find myself taken aback at some of his jokes, but it never detracted from my overall experience of reading it – my theory is that he’s simply getting older and grumpier, which I think we are all destined to do.

I love his observational humour, and I’m also a big fan of Seinfeld, so I guess that explains it. Because Sedaris travels so extensively, we are treated to his opinions on just about everything:

“We took a cab yesterday morning to the Sheikh Zayed mosque, which is reportedly the biggest in the world and one of the few that allow non-Muslims to visit. Men can’t wear shorts or tank tops, but apparently they can wear T-shirts reading DON’T MESS WITH TEXAS. Women, on the other hand, have to dress like the Grim Reaper”.

-p. 323 of A Carnival of Snackery by David Sedaris

I realize this could be offensive to some, and no doubt many people will find his writing offensive, but I can’t help but laugh at this stuff, even if I feel a bit naughty doing it. He also makes fun of himself plenty of times, which tends to balance things out:

“The reading was fine but often during the Q and A I’d hear something completely fucked up and realize it was coming out of my mouth. Which happens.”

-p. 389 of A Carnival of Snackery by David Sedaris

He does include some serious observations, including a short section where him and his partner Hugh admit to each other that they were both raped at at least one point in their life, which according to the casual way they bring it up, seems to be (horrifically) common for men who are gay. And as mentioned in older books he’s released, one of his sisters commits suicide, and him and his siblings never seem to recover from their mother’s death years ago, so David has certainly had his share of sadness.

I’ll leave you with another quote, as his writing is, and will always be the true star of his books for me:

“Q and As followed all of this weekend’s BBC recording sessions, and at the one yesterday afternoon a woman asked how I feel when my values are challenged.

‘I’m not sure I understand the question,’ I told her.

‘For instance,’ she said, ‘whenever I fly in the U.S., some big fat American will take the spot next to me and completely spill over into my personal space.’

I knew what she was saying, but the only thing I hate more than being crowded out of my seat is listening to self-righteous thin people complaining about it, so I said, because it’s true, ‘It’s actually not a problem when you fly first class.'”

-p. 492, A Carnival of Snackery by David Sedaris