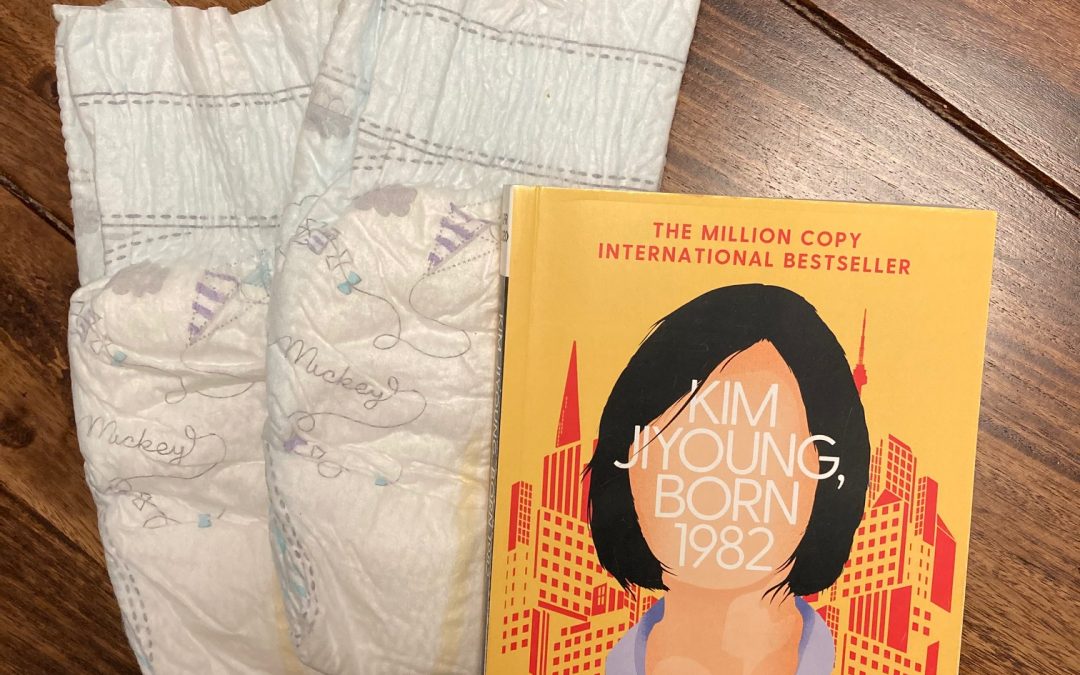 Every once in a while during my reading travels, I unknowingly pick up a book that speaks directly to me in that particular moment in my life. Because I read so many books, and consciously pick ones that I think I may like, this doesn’t come as a shock, but still, I sometimes feel as though they find their way into my hands as an act of fate, and these coincidences propel me forward when I feel my reading resolve lacking. Most recently, this happened when I turned the last page of Kim Jiyoung, Born 1982 by Cho Nam-Joo. Translated from the Korean by Jamie Chang, this novel has sold over a million copies worldwide, and was also made into a movie. It’s debut in North America was highly anticipated, and now that I’ve read this slim novel, I see what all the fuss was about.

Kim Jiyoung is an ‘every woman’, the English translation of her name is basically “Jane Doe”, and nothing about her life is extraordinary. She lives a fairly middle class existence in South Korea, and because she follows the set path for her gender, without complaint, her life becomes a shell of what she intended, shadowing the men in her life while she struggles with the new, towering expectations of motherhood. After a few years of living this robotic life, she ends up exhibiting a strange kind of mental illness, taking on the personalities, mannerisms and speech of her other family members. Her husband suggests she see a therapist, so the novel begins with a quick example of her symptoms, then continues with her monologues relaying each stage of her life, from her time as a young girl through to the present day. The novel ends abruptly in 2016, with Kim as a 34-year-old, suffering from a varied form of depression. Interspersed throughout the narrative are footnotes; statistics and references that contextualize Kim’s environment and the cultural expectations she grows up in.

So why does this book feel so relevant to me right now? Today is my first day of working outside the home in five years, since I went on maternity leave to have my first child. I’ve been working freelance the entire time I’ve been home (in fact, while in the beginning stages of labour with my eldest, I was reading a book that I was going to discuss in a radio interview a few weeks later) but today is the first day of my new office job, at Calgary Reads, an organization that I’m proud to be a part of. I’m a little anxious of course, starting a new job is always nerve-racking, but I’m more worried about the fact that I’m a completely different employee than I was five years ago. I can no longer throw myself into my job, working until the tasks are complete. No, I have to leave my office at 3pm every day to pick up my daughter from school, and I’m so grateful I have a job that allows this, but at the same time I miss the old me, the woman who could be depended on to stay as late as needed. This book lays bare this internal struggle that Kim, myself, and many other women feel. We want to the be the best mother we can possible be, but at what cost? What other parts of us are we willing to ignore? Although not entirely exempt from this same struggle, men have an entirely different set of expectations, but their career path is arguably much more straightforward, their age, or marital status is rarely a q deterrent to them getting hired the same way it is for a woman.

Kim is sexually harassed as a student and as an employee. And when she becomes a mother and loses her sexual appeal, she is accused of being lazy by younger men, living off her husband’s wages so she can sit at home with her kids. Women of all classes, cultures and backgrounds can roll their eyes at these assumptions and stereotypes, because we’ve experienced at least one of these unfair situations or labels as a woman. This book points out the hypocrisy of our society, that women are demonized no matter what they do. Choose to stay home to raise your children? You’re lazy. Choose to return to your career after having kids? You’re a bad mother and power-hungry. Choose to not have kids at all? You’re selfish, not a ‘real woman’. Kim does what she’s supposed to; goes to school, (but only because there is money left over from her brother’s education), works hard to secure a job, gets forced out of her job once she becomes pregnant, struggles to find a new job that coincides with her childcare is available, fails and decides to stay home permanently. Mentally, she suffers the consequences. This book doesn’t blame Kim, in fact it shows how little choice she has, how her environment and cultural expectations make it almost impossible to pursue a career and family at the same time.

Since the pandemic began in March in the western world, there’s significant statistical data proving that more women than men have lost their jobs, even when their salaries were higher. As always, women are bearing the brunt of the household work, forced to be a ‘good mother’ first, and if they have time, a good employee second. Men are simply expected to be good employees, and if happen to be good fathers too, they are celebrated as going above and beyond. Kim’s husband is a ‘good’ one, offering to support her in her search for work, promising to help out when possible, but he works 12 hour days so isn’t available to help when their child is awake. Is Kim’s husband the villain for working hard and supporting his family? Of course not, they love each other and made the decision to have a child together. And yet, we can’t help but resent him when it’s clear from the beginning of the novel that Kim enjoyed working, was good at it, and hoped to build a more active career outside the home. There are no easy answers in this book, and no easy answers in the real world either.

This book is urging women to pursue their own version of a balanced life, regardless of what their family or friends may expect of them, and I’ll be sure to keep this in my mind as I embark on the next step in my career. Kim’s story has an ominous tone, and although many may see it as a dire warning, I see it as a personal call-to-action to strive for a better version of myself that goes beyond the expectations of others. I hope both male and female readers are as invigorated by this book as I’ve been.