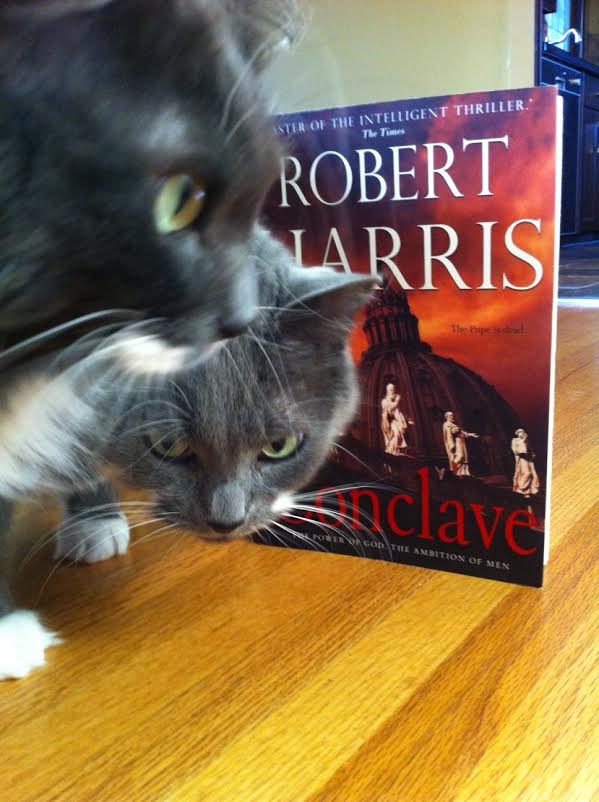 Are you a boring person? Then you are going to LOVE this book! Just kidding, lots of people are going to like this book, in fact I think I’ve found the perfect Christmas gift for anyone over 70 years old, who as we know, are a difficult crowd to buy for; they have everything, and don’t want anything new.

Conclave by Robert Harris is a great read, even though it has a pretty dull premise: the election of a new pope. Maybe I’m jumping to conclusions here, perhaps many people think the election of a new pope is a great beginning to a thriller, but I was skeptical that this would hold my attention for very long- yet not for the first time, I was wrong!

This book has been called a ‘literary thriller’ and an ‘intelligent thriller’ which basically implies that the cliffhangers aren’t due to murders or gruesome scenes. There are scandalous secrets though, and these provide a different kind of thrill, one that sustains and deepens the plot rather than confusing it. The story takes place over a few months, starting with the death of one pope, and then fast forwarding to the election of a new one, which lasts about three days. Apparently this is a very secretive meeting that the cardinals participate in to elect the new pope (called a conclave), and learning about this process is fascinating. You may not believe me, but it was one of the best parts of the book. Obviously Catholics will agree, but agnostics and atheists will also enjoy this too, I promise.

We see the election through the eyes of Lomeli, the Dean of the College of Cardinals, who is also tasked with ‘running’ the election so to speak. Over the course of the three days he learns some deep and dark secrets of some of the pope-hopefuls, so he must decide whether or not to voice these concerns, or let the election continue uninterrupted. Technically, he’s not supposed to sway opinions, but when he hears about some of these dark deeds, he struggles with the ethics of the situation. To top it all off, a Cardinal that no one even knew existed flies in the for election, so he’s trying to find out more about this person as the days continue. I’m drawing you in already, aren’t I?

Apparently Robert Harris is a bestselling writer, I had no idea before I picked up this book, but I’ll make sure to keep my eye on his future writing for sure. Although he picks topics that are literally of zero interest to me (no offense!), his writing is so fabulous that it reluctantly draws me in. And I learn a thing or two in the process, which is always nice.