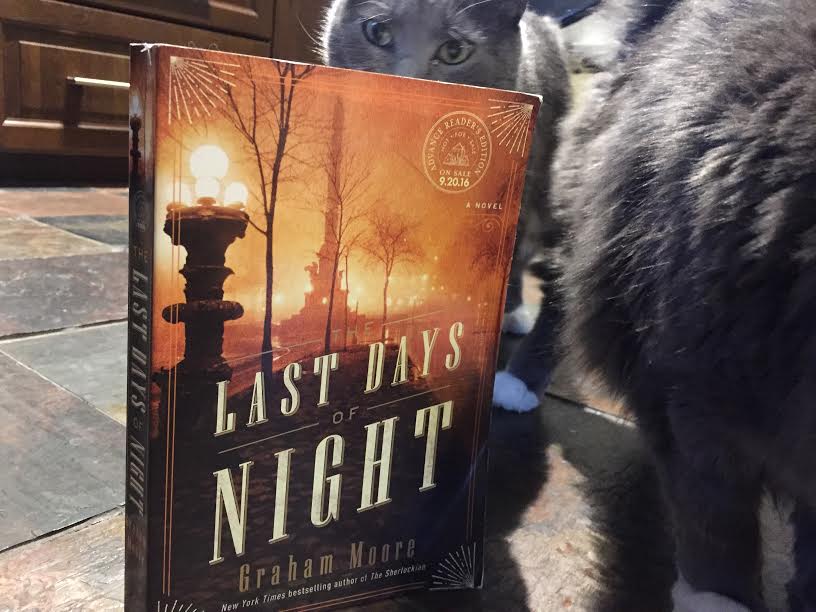 Graham Moore‘s The Last Days of Night is a jolly good time. Moore’s name may sound familiar because he is the academy award winning screenwriter behind the movie The Imitation Game. He also wrote a book called The Sherlockian, which was apparently quite popular as well, so he’s got lots of impressive points on his resume. I didn’t know about either of these things before I started reading this latest novel, but I really liked the cover, so I figured I’d jump right in.

It’s based on the true story of Thomas Edison and George Westinghouse’s legal battles over the patent of the first working light bulb, told from the perspective of Westinghouses’s fresh-out-of-school lawyer Paul Cravath. Edison is suing Westinghouse for ONE BILLION DOLLARS, and this was back in 1888 keep in mind. Something of a young prodigal, Paul is desperate to win the suit for Westinghouse, even though his chances are slim, especially due to the fact that the wealthiest man in the world J.P. Morgan is on Edison’s side. But this isn’t just a book of legal intrigue, (which is actually fascinating, haven’t you ever seen Suits?) there’s a healthy dose of romance when Paul meets Agnes Huntington, a famous singer also living in New York. All of these elements come together to create a story that clips along at a pleasing pace.

Moore includes an extensive author’s note that I found extremely helpful, so much so that I wish every author did this when taking inspiration from real-life events. He reviewed all the major events of his plot separately, specifying what was based in fact and what he took liberties with. This saved me from having to look up the history myself; some people may say this a bad thing, but being the lazy reader I am, I thought this was perfect. It also taught me a bit about his writing process, which was also fascinating. It’s clear he did a lot of research for this book, which is also evident in the atmosphere he so effortlessly creates with his descriptions of the ‘big city’ and its famous inhabitants at that time.

Storytelling is clearly a talent of Moore’s, he uses short chapters to get his point across quickly and keep the reader interested, which is useful in a story that dwells in the minute of technology and law: both can be tedious subjects if not handled deftly. And at the very beginning of the story, he uses Paul as a mouthpiece for relaying the importance of fiction vs. fact: “Even a true story is a fiction…it is the comforting tool we use to organize the chaotic world around us into something comprehensible” (p. 6). I think the inclusion of the statement is a very clever tool on the author’s part, because it alerts us early on to the idea that things aren’t what they seem, but we can’t blame the narrator for relaying things incorrectly-it’s only a story, right?

I also wanted to mention the fact that this is a great work of historical fiction for men. I rarely read a novel that I think ‘my husband would love this’, but I actually thought that quite a bit with this one. Chapters begin with quotes from business titans like Steve Jobs and Bill Gates, and the strategy behind invention is a fascinating topic that I think all the engineers in my life would enjoy reading about, which is a subject dealt with on many levels in this novel.  I think Last Days of Night would be a good vacation read to leave at family cottage because more people will enjoy discovering this book for themselves.