So the theme for my latest radio segment was ‘great titles’. Now some of you may assume I’m running out of ideas, and scraping the bottom of the barrel for themes to group books into, but I’m actually quite proud of this one because it’s something that we don’t normally talk about; the title of the book. You can listen to the full segment here. 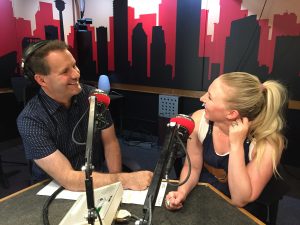 For the record, we don’t actually sit this close during the recording, we’re just ‘hamming it up’ for the camera

I reviewed Jen Agg’s memoir I Hear She’s a Real Bitch (video review to come) and Kevin Kwan’s Rich People Problems both of which I read while on vacation. I make a point to say that you shouldn’t pick a book based on its title, or its cover for that matter because you’ll probably be disappointed. This is a ‘do as I say, not as I do’ type of situation. I took a chance on Agg’s book and really enjoyed it, and I knew Kwan’s would be entertaining, to say the least. So the fun titles are only the beginning to these great reads, time to dive in for that last few weeks of summer!