I realize I keep stating that I’m reviewing books I don’t typically read, but this is yet another case of that happening. I have the CBC Homestretch to thank for pushing me out of my comfort-reading zone, and what an adventure this has been! I had to stop and start Guy Gavriel Kay‘s latest Children of Earth and Sky because it was so damn long, but once I came back to it, I realized how much I had been missing the characters, and was eager to jump back right where I left off.

There’s no real point to my trying to sum up the plot of this book because it has so many different story lines; in fact some of them never intersect at all. But I will tell you it’s full of adventure: scandalous royal plots, romance, epic battles, religious warfare, family grudges, and bad ass women. In fact, I was really impressed by the strong and intelligent depiction of women in this book. Renaissance Europe wouldn’t come to mind as the kindest era for women, but Kay rewrites history to place all kinds of females in positions of power, which this woman loved.

I started off reading this book with a chip in my shoulder, I’ll admit it. When I saw the three page long list of (principal!) characters, and a map that depicts the fictitious setting of the novel, I had flashbacks to my failed attempts at reading Lord of the Rings back in high school. But I persisted as any good book reviewer does because I knew that Kay was a master at this genre, so although it was difficult for me to get into at first, I’m so glad I kept going. Although there is ALOT going on here, the characterization is masterful, we quickly find ourselves caring about the people we read about, even as they are committing barbaric acts (which isn’t that rare back in that time period). There are also lots of devious twists and turns in the plot, many of which I didn’t see coming, and the hint of the supernatural was just enough to keep me guessing. 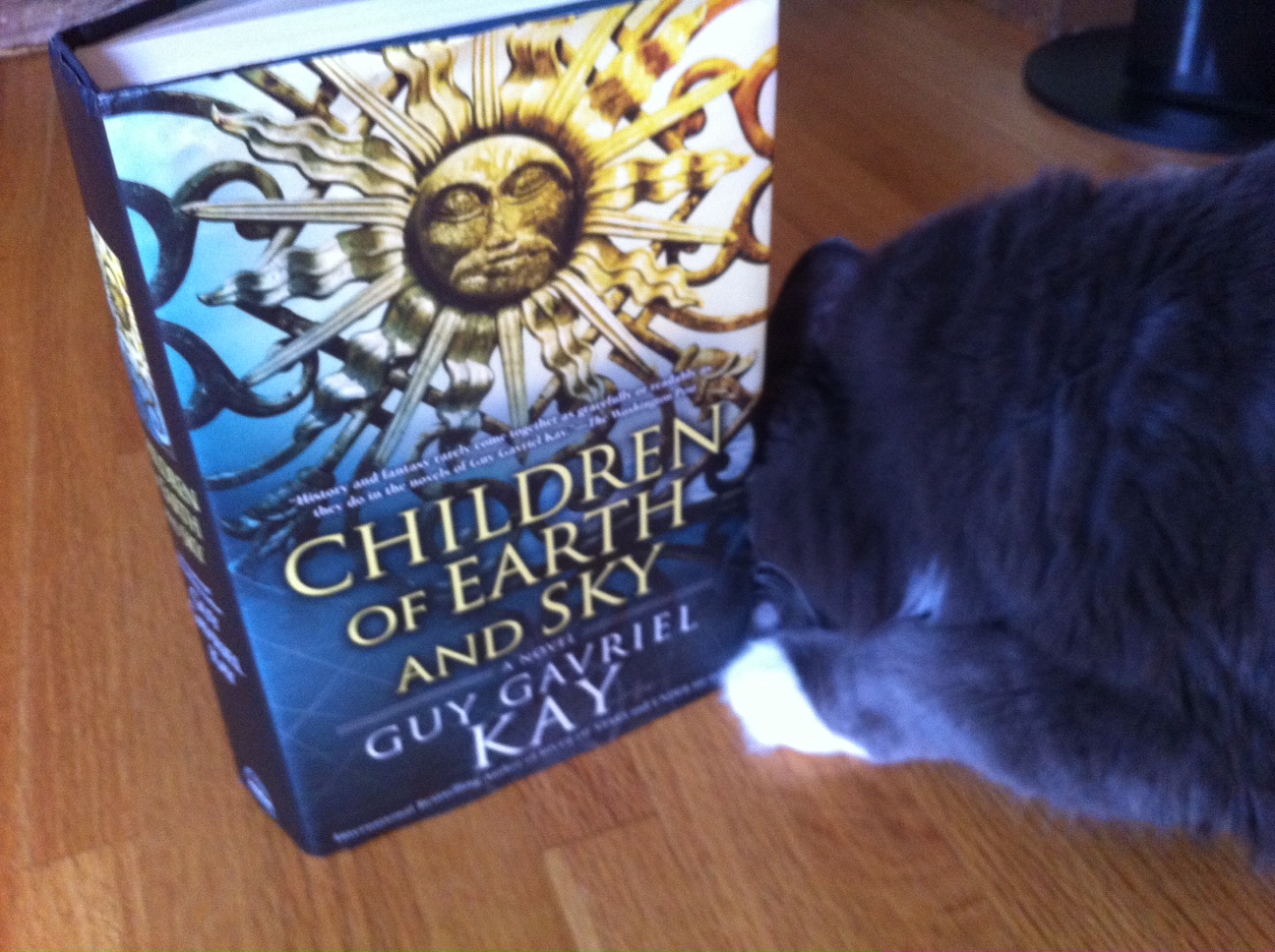 Smokey is diving right in to this delicious read

Kay was an expert at keeping the reader interested for a full 567 pages: not an easy feat, especially for someone who’s not a fantasy buff. And I don’t have any real complaints, other than the fact that every once in awhile we came across a character who was unfamiliar, and then they had a significant portion of pages devoted to them, but never heard from again. You almost feel cheated in a way, and it left me wondering why we had learned so much about that person’s inner most feelings if they weren’t going to make another appearance. However, this could be a tactic used by many fantasy writers, especially when there are so many characters being introduced so that’s not really so much a complaint of mine, more like a question. Comment below if you have the answer for me!