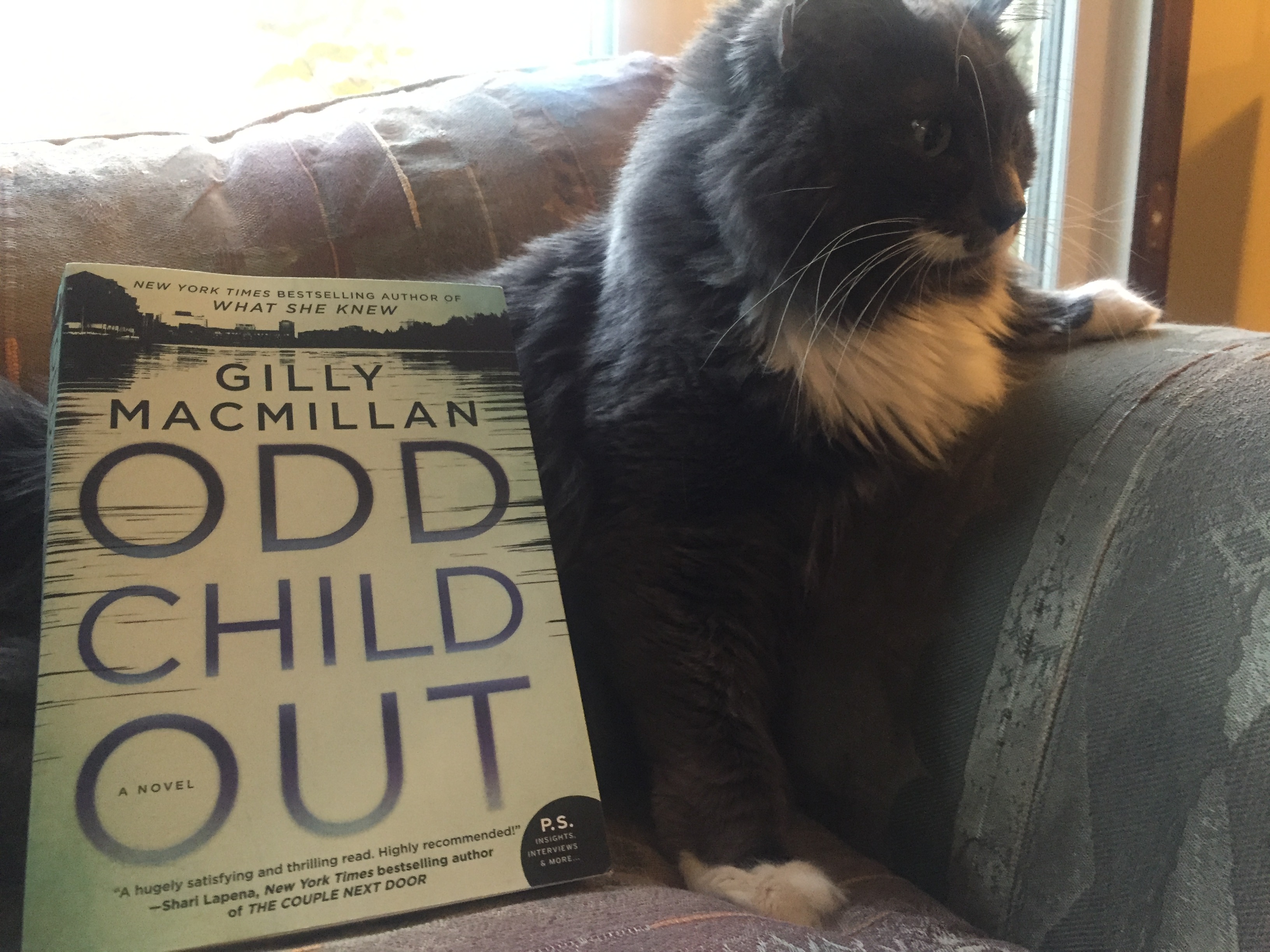 Gilly Macmillan is a New York Times bestselling author, and her latest book is called Odd Child Out, which I devoured a few weeks ago in anticipation of this interview. Her latest novel features returning detective Jim Clemo who is faced with a difficult case; two young boys were spotted in a remote industrial site on the edge of a freezing cold river, one boy fell in and is in critical condition, while the other has disappeared. Even worse, the missing boy is a Somalian refugee, inflaming the already-high racial tension in the city. And if the stakes don’t sound high enough yet, I can promise you someone dies-what’s a good thriller without some death thrown in for good measure? See below for my questions, no spoilers, I promise!

Q: Your detective Jim Clemo has come back from a leave of absence and is launched right back into another case involving children, despite the fact he is still recovering. How important is it to you that your readers connect with and trust Jim?

A: It is extremely important to me that readers connect with Jim! He is a favourite of mine, and is a repeat character who we – and I include myself – first met when we lived through the Ben Finch case and its aftermath alongside him in What She Knew. Anybody who read What She Knew will have joined Jim in therapy sessions so they will have some extra insight into his personality. Jim’s voice is the one which allows us inside access to two major police investigations as they unfold in both What She Knew and Odd Child Out, so for him to have our trust is also important. Having said that, I never trust any of my characters 100% and I think Jim has his flaws. I rarely doubt his personal motives, but occasionally I feel doubt about his professionalism, as he is prone to let his feelings influence his judgement. It’s a trait that certainly keeps me on the edge as I write his character. 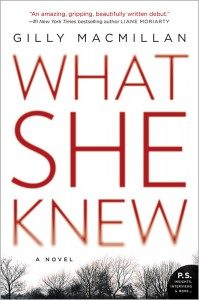 One of Macmillan’s previous books

Q: So far, all three of your books have dealt with either missing children, or kids being closely involved in a crime. How do you strike a balance between using the sensitive subject matter of children in danger while still creating a high-stakes plot?

A: I rely on my intuition as a parent and a reader to help me strike that balance. There are things I personally would be very uncomfortable reading about and I use that as a measure of what I should, or should not, include in my own books. It’s very much a matter of gut instinct.

Q: As we progress through Odd Child Out, other ‘side’ mysteries and problems emerge within the plot, causing the reader to shift their focus from Noah and Abdi’s friendship. How did you plan the book’s storyline, did you start from the beginning or the end? Does your writing process vary for each book, or do you follow a particular routine?

A: I always start my books at the beginning, sometimes with only a loose idea of how I would like them to end, and this was the case for Odd Child Out. I wrote the first scene first, because the idea of it was so compelling, and I let things develop from there. I like to think of my story almost cinematically as I progress. When I’ve finished a scene, I ask myself three questions: Would this scene make me want to turn the page and read on? If so, what would I like to know next? What would I like to see next? Hence, we meet the Noah and Abdi’s families immediately after the traumatic beginning scene of Odd Child Out, because I wanted them to give the boys’ lives some rich context. I tend to work out the answers to the central mystery as I write, and I always have this in mind when I select what the next scene will be. I develop side storylines as they emerge, picking out the ones which interest me the most. I have worked this way on each of my books. It’s very instinctual, relying on my alter ego as a lifelong, dedicated and fussy reader more than anything else. The downside to this process is that it can lead to some brutal rewrites and edits after the first draft, because you inevitably have some dead wood in there. It’s all useful to you as an author, as it allows you to get to know your characters better and to try things out, but not all of it has a place in the final version of the novel.

Q: One of the perspectives you include in Odd Child Out is that of a person who is dying, even going so far as to describe their experience of slipping into death and their feelings of those last few moments of life. Did you do any special research to write this, or did this scene come purely from your imagination?

A: I didn’t embark on specific research to write this scene, but my father died from a long illness while I was writing Odd Child Out. I spent a lot of time at his bedside during his last days and hours so the painful process of slipping from life to death was very much on my mind at the time of writing. I used my imagination to create the last conscious moments of life in the book because my father was too unwell at the end to articulate how that felt.

Q: Abdi’s family are refugees from Somalia, and they spent a great deal of time in a refugee camp called Hartisheik before settling in Bristol. The descriptions of this camp are horrifying, but fascinating at the same time because we so rarely get a glimpse into this life except through the media. Have you ever seen or visited a refugee camp yourself, and why did you make it such a pivotal place in this book?

A: I have not visited or seen a refugee camp myself. I relied on research to help me create the fictional experience of my characters in the novel. I read as many first-person accounts of camp life – either written by refugees, or recorded by others from spoken testimony by refugees – as I could find. These were by far the most memorable thing I read. Amongst other things, I also I pored over official UNHCR reports on a variety of camps along the borders of Somalia and Somaliland, and read an excellent book called City of Thorns: Nine Lives in the World’s Largest Refugee Camp by Ben Rawlence.

It felt important to make the camp a pivotal place in the book because it is somewhere you would only find yourself if your life elsewhere had completely unravelled in some way. A refugee camp can never be a proper home because it is a place of transit and impermanence, and one of the central themes of Odd Child Out is how the majority of us long to feel safe and settled, to have a home and to have opportunity. I hoped the inclusion of the camp as a location in the story might also shed light on how long and arduous refugee journeys can be, and how much desperation and trauma many refugees must go through before they can even begin to rebuild their lives in places very distant from the homes they once knew. 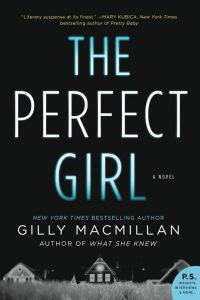 Another one of Macmillan’s books!

Q: The topic of immigration and refugee welfare is a timely one, felt all over the world. How does including such an important and serious issue in a work of fiction give people an unique perspective on this highly political subject?

A: Fiction – and the novel in particular because of its length – has the capacity to allow readers to develop empathy for the characters we are reading about, because we come to know them as individuals. It’s a powerful antidote to the political rhetoric around refugees and immigrants which often encourages us to think of these people as a collective and depersonalised mass who might pose a threat. We can easily lose sight of individual stories and motivation amidst all this fear mongering. Fiction can provide a personal, relatable insight into the lives of others, and where it can fall short of allowing us to understand properly another culture, it may be able to fulfil a crucial role in encouraging us to try to understand others and to treat them with empathy and respect, no matter how different from our own their background, culture and experiences may be.

Q: The character of Ed Sadler is one we are seeing more and more in fiction; a person who wants to magnify the plight of others, but in the process unconsciously objectifies them. Is there a larger message that we can take away from this character?

A: Examine your motives when you act. Carefully weigh up the pros and cons of what you are doing not just for yourself but for the people you are working with or ‘for’. Act with empathy and respect above all.

Q: Are we going to be hearing from Jim Clemo again soon? I’d love to know what his next case is going to be about!

A: My fourth book – working title Time To Tell – is a standalone novel featuring a different detective, but it does involve two very exciting cases in Bristol – one a cold case and one a present day one. Plans for my fifth book don’t currently include Jim, but do involve Emma Zhang, his ex-girlfriend and ex-cop turned crime reporter. It’s in the very early stages of planning, though, so never say never. Even if Jim doesn’t appear in Book 5, I expect we may well see him in a future novel, so he probably hasn’t gone away forever. I like him too much for that! 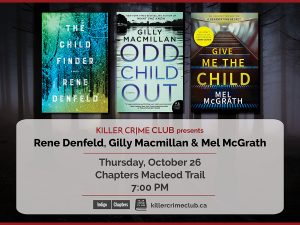 Thanks so much to Gilly for taking the time to do this interview. And the fun doesn’t stop here folks, I’ll be asking Macmillan even more questions next week when I meet her in person! I’m hosting the Calgary stop of the Killer Crime Club from HarperCollins, and Macmillian will be joined by Rene Denfeld and Mel McGrath for what should be a fun evening. The best part is, it’s free, so come on down if you’re in Calgary.