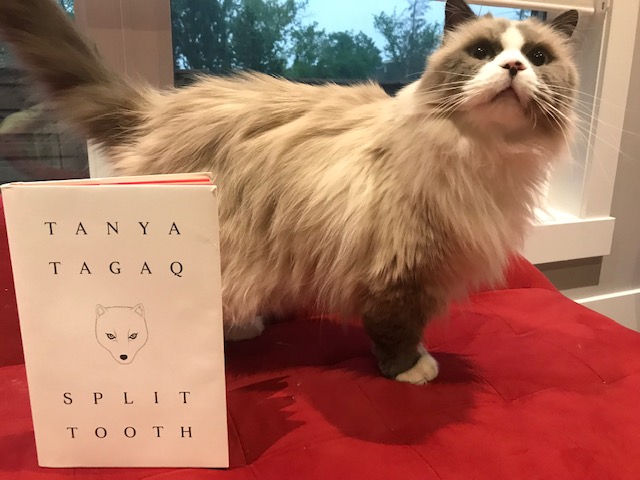 I’ve been meaning to read and review Split Tooth by Tanya Tagaq for awhile now… since October, to be exact. I saw Tagaq perform in Calgary as part of Wordfest, and once I listened to her read it out loud, I knew I’d enjoy reading it myself too. Her throat singing is absolutely incredible, in fact it has brought me to tears more than once, but her writing is equally affecting, and the fact that this is her first book is beyond impressive.

The book is a mash-up of genres; memoir, poetry, fiction and myth. Having heard her speak about it, I knew that it mirrored parts of her youth growing up in Nunavut Canada, but it should not be considered a straightforward memoir, which will be obvious when one reads it. At some points the book veers into fantasy or magical realism, for instance there’s one point in which the northern lights impregnate the protagonist-this can be taken in many different ways: allegory, myth, a re-telling of a traumatic experience- Tagaq leaves it up to the reader to decide.

Our female protagonist remains unnamed, as does the majority of the characters. She grows up in a small northern community that struggles with addiction of all kinds so she finds solace in the barren, harsh, but beautiful landscape of the Arctic tundra. We dip in and out of varied experiences with her; going to school, being sexually assaulted, getting high with her friends, talking to the elders in her community. Poetry is interspersed throughout the narrative along with line drawings by Jaime Hernandez; the mix of media is one of the strongest aspects to this book because it completely immerses the reader, keeping our attention tied tightly to what’s in our hands only.

As a Canadian who tries to read a wide range of indigenous literature, I found the descriptions of life in the far north fascinating. The connection that particular population has with their land is incredible. Living in a city, it’s hard to fully understand how important the weather and seasons can be when living in such a remote area. The fact that they live so far north that the sun never really goes down during one point in the year lends the area a mythical quality in itself, add to that the descriptions of the hordes of foxes that roam around in packs, overpopulated because of the melt cycle, and the setting of the book takes on a life of its own. In fact, I could argue that the landscape is the main character instead of the young girl; everything revolves around the snow, human actions seemingly inconsequential in comparison to the movements of the ice surrounding the town. I found it easier to focus on the outdoors while reading, because for the characters and readers alike, it’s a respite from the horror that can be found indoors. Many adults have created dangerous environments for their children in their own homes, they are suffering from the pain of poverty and reminders of abuse from residential schools so alcohol and drugs are an escape for them. It’s a story we hear often as Canadians now, but it’s always painful to read about it, especially when told from a child’s perspective.

Many will want to know; what is truth, and what is fiction here? What actually happened to Tagaq, and what is she making up? Obviously the only person who knows the answer to that is her, but if you do read this book (which you obviously should), I recommend you read it without worrying about what’s true and what isn’t. Simply try to enjoy it for what it is; an engaging and emotional read. I’ve heard the audiobook is spectacular because Tagaq narrates it herself, including snippets of her throat singing too, so it’s well worth the investment in different formats. I have the copy of the book with the red page edges, so it looks spectacular on a bookshelf no matter which way you place it; it’s truly a work of beauty, inside and out.