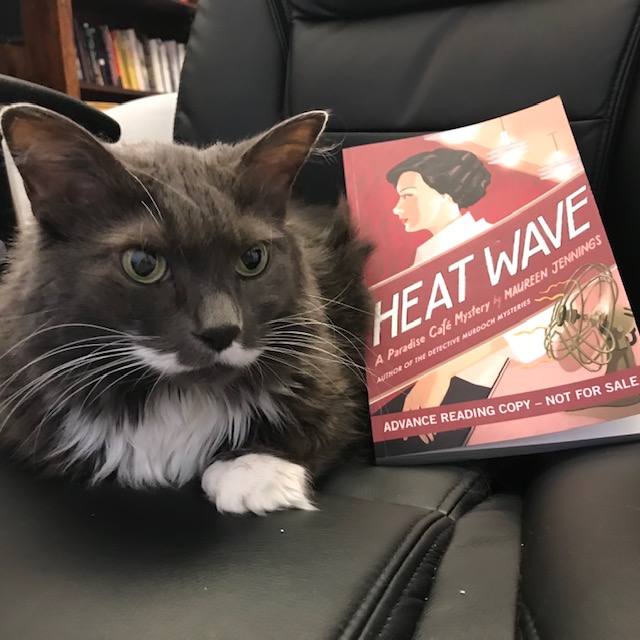 Yes, that’s right-THAT Maureen Jennings has embarked on a new series of mysteries featuring a sassy and capable female detective by the name of Charlotte Frayne. Murdoch Mystery fans are sure to love this new heroine just as much as they loved Murdoch himself, and for those who just can’t get enough of Murdoch, there’s a surprise in store for you too! Welcome to the first in what I hope will be a long-running series of Paradise Cafe mysteries…

Heat Wave introduces us to Miss Frayne, a woman who is sharp, loyal, independant and eager to prove her worth in a man’s world (this story takes place in 1936). Frayne is a new private eye in her boss’s firm T. Gilmore and Associates, located in Toronto Canada. During a particularly unbearable hot spell one summer, Gilmore receives an anti-semitic hate letter just hours before his wife is attacked. Frayne receives a similar note days later while her boss is in jail, as he is the main suspect in the attack. Vowing to get to the bottom of what’s happening, Frayne investigates to help clear Gilmore’s name. While her boss’s innocence hangs in the balance, she’s also taken on another case; the handsome owner of the Paradise Cafe, Hilliard Taylor, has asked her to work undercover at his establishment. He co-owns it with three other men who all fought together in WWI. Money has started going missing from their shared safe at the cafe, and Hilliard isn’t sure who’s doing the stealing. So, in between efforts to clear the name of her boss and keep his business afloat, Frayne has taken on some back-breaking waitressing shifts to help solve another mystery, all in record temperatures.

After years of crafting mysteries, Jennings is the writer to rely on when one is hankering for a good crime novel. And in the truly capable hands of her new publisher Cormorant Books, this new series is sure to delight her old fans and create a whole host of new ones too. One of the main reasons Murdoch Mysteries is so well-liked is Murdoch himself, which will come as no surprise to lovers of this genre. The detective must be likable in way or another; some are crabby which is fun to read, but Murdoch and Frayne are both upstanding, likeable people so we are happy to view the world through their eyes. But Frayne is no push-over. When men underestimate her, she is more than happy to prove them wrong, which gave this book a more modern feel. Her resistance to sexism is a welcome trait, but Jennings stays true to society’s expectations at the time, meeting Frayne’s outspokenness with male surprise and bemusement (which is unfortunate, but realistic). I would love to see how Miss Frayne would fare in today’s society, she’s truly ahead of her time.

The plotting of this slim novel is seamless. There’s only 240 pages but we solve not one but two mysteries and learn a great deal about the protagonist and the supporting characters in her life. Nothing is rushed or glossed over; the storyline climaxes in a short yet action-packed few pages, and our journey to that point wasn’t totally unpredictable, but enjoyable nonetheless.

There are lots of threads that are introduced in this book, and it’s clear that Jennings intends on continuing and developing these in future books, like Frayne’s love life. There’s hints of romance to come, but nothing too mushy, because although the characters demonstrate some serious chemistry amongst themselves, we never lose sight of the main point to these books; solving mysteries! It’s during the ‘down time’ of the detectives that we enjoy learning about their personal lives, but this is also when an epiphany typically arrives to rush us quickly back to the task at hand, as in this case, a few lives are at stake.

The art of solving a mystery has changed significantly in the past few decades. Instead of relying on technology that the reader isn’t familiar with, she relies on her intelligence and intuition. To determine the identity of the culprit, Frayne meets and talks with lots of different people, plain and simple. In some ways, this puts her on the same playing field as the reader, as she doesn’t have any obscure experience or knowledge that we don’t, however, the fact that she’s able to do what she does with so few resources makes her all the more impressive. So for those who are nostalgic for the days that didn’t include a cell phone (myself included), you’re sure to enjoy Heat Wave, in what I hope will be the first of many books to come in this series.