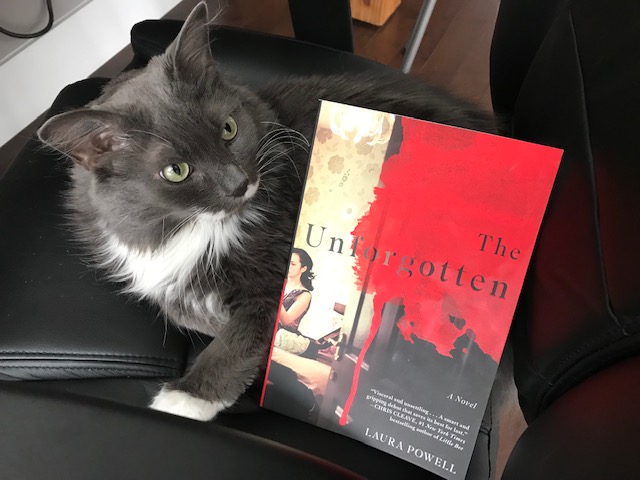 How do you feel about books that jump from one time period to another? Is it jarring? Does it annoy you when it’s in a suspense novel especially? Of course it does, when you’re on the cusp of a cliff (hanger), you want to leap to the next page as quickly as possible to find out what happens next. But what if that particular book alternates time periods in each chapter? Do you throw the book across the room, or rush through your reading of the current chapter so you can get to the next one? If this is beginning to sound like your nightmare, The Unforgotten by Laura Powell probably isn’t for you, but if you can handle some delayed satisfaction in your reading, you’re in for a real treat.

It’s 1956 and Betty, a 15-year-old girl living and working with her mother in a small seaside hotel, is on the cusp of womanhood. But when some brutal murders of young women rock the world of her small and conservative town, Betty and her mother find themselves catering to a new group of hotel guests; reporters intent on finding out the identify of the “Cornish Cleaver”. With this influx of new guests comes Mr. Gallagher, who Betty quickly falls in love with, and he with her, despite (or because of) the significant age gap.

The 1950s storyline is really absorbing, and it included my favourite parts of the novel. But every other chapter takes place in 2006, centering on a woman named Mary who harbours a dark secret related to the Cornish Cleaver murders from decades ago. Powell is no fool; she ends chapters on major cliffhangers so we have no choice but to race through the pages to read about what happened last to Betty or Mary, although we spend significantly more time in 1956 than we do in 2006.

If you can maintain your composure and patience through these oft-used writing tricks, you’ll be rewarded with an in-depth and intelligent look at the social expectations of the 1950s (and a good murder mystery!). Mr. Gallagher is tall, dark and mysterious, and although he’s a reporter just like all the other guests, his feelings for Betty put them both in a dangerous situation-figuratively and literally. Because they’re forced to sneak around while a murderer is on the loose, they end up seeing things they wished they hadn’t, while Betty ALSO struggles to hide the fact her mother is a barely-functioning alcoholic. There are rumors abound around Betty’s mother and her late night ‘habits’ so the intense pressure on Betty to maintain the hotel (and find a suitable husband for the future without losing her ‘ladylike’ reputation) is almost too much to bear for the reader. Things just seem terribly unfair for Betty while other characters use her for their own gain. I swung between feelings of intense pity for Betty and her difficult family situation, and frustration at her naivety throughout the story. Despite this, the first-person perspective that Betty offers us is a useful one because it allows the mystery to unravel in a slow yet believable way.

The murders themselves take a back seat in this book because they serve as a plot device to further complicate the relationships in the story, but the reader doesn’t really know the victims or their relation to the main characters. So although we want to know who the killer is, it doesn’t wrap things up nicely even when we find out ‘whodunnit’. What’s more interesting is how these murders and that particular summer plays out in people’s lives in the future, which is why we live in two different time periods in The Unforgotten. When we do learn what really happened all that time ago, the big reveal is not shocking but still very satisfying. Powell has successfully blended a few different types of novels into one which is why I can confidently recommend this to other readers.