Book Review: To Me You Seem Giant by Greg Rhyno 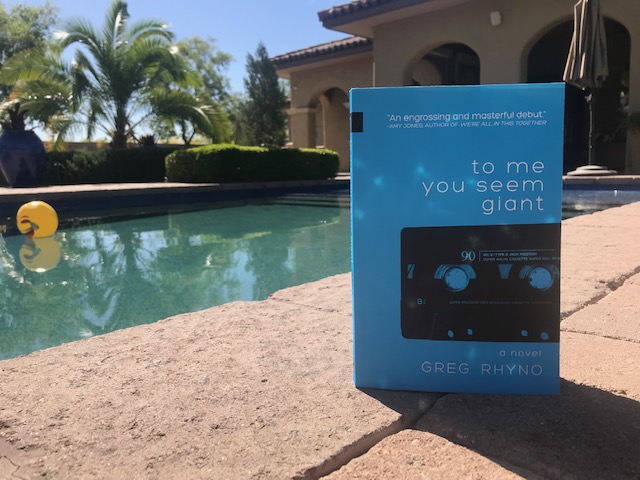 I’m making more of an effort to read out of my comfort zone these days, and To Me You Seem Giant by Greg Rhyno is a definitely a great example of this. It’s about music and teenage boys, both things I’m not too interested in these days (mind you, it was all I thought about when I was a teenager, but since I just recently celebrated a mid-30s birthday, I’ve thankfully moved on to more mature interests). Anyway, despite my misgivings about the subject matter, I really enjoyed this book, it felt like a trip back into my own youth, and from my own female perspective, the characterization of the young male protagonists really rang true.

The book is styled and formatted with a music lover in mind, more specifically a person who loves cassette tapes. The story toggles between Side A and Side B; Side A being the story of Pete Curtis’s last year of high school in Thunder Bay, Ontario. Side B is the story of Pete Curtis’s first year of teaching high school in Thunder Bay, exactly ten years later in 2004. In his youth, Pete was part of a relatively successful garage band named “The Giant Killers” who had a talented songwriter and singer at their helm: “Soda”. But when speed ahead to Pete’s adult years, we realize that something went terribly wrong that last year of high school which saw Soda realize his dream of becoming a rock star while his bandmates are left in their hometown pursuing more practical career paths. As a high school teacher Pete is only slightly bitter about this disappointment, but he’s still struggling to find something that brought him as much joy as making music once did.

This book is firmly anchored with popular and alternative music from 1994, so for those who were alive then, you’ll get those warm and fuzzy feelings of recognition with the name dropping. Just the descriptions of building mix tapes and the pure joy of having your favourite song come on the radio are wonderfully portrayed in this book. I know it sounds corny, but reading this made me nostalgic for that time in my life, even though I had dreadlocks (cringe).

Rhyno uses technology as a way to drum up some nostalgia for 2004 in the Side B sections. Although it was only 15 years ago, it still seems so far away. For instance, Pete regularly goes to rent movies at his local video store because he resents the proliferation of blockbuster locations popping up (!!!) and he’s just gotten his first cell phone and doesn’t know how to use it. 15 years ago people! Instead of making me smile wistfully into the distance like Side A accomplishes, I just felt old reading Side B. I can’t help but imagine this was the intention of the author, regardless of how cruel it may seem.

The friendships between the male characters were my favourite parts. I struggle to think of a topic I know less about than friendships between teenage boys BUT I still think these were well done, despite my lack of knowledge. The way the boys spoke, interacted with each other, and left so many things unsaid was like a window into a club I’ve never been allowed into until now. Sometimes they did mean things to each other, but each character was drawn so empathetically I felt like they were friends of mine by the end of the book; I was sad to close the last page on them. I didn’t connect with the characters as much when they were older, but the author did a great job of continuing their voices into the future decade. Everyone always says they don’t feel older, they just look older, and this book is a great demonstration of that; Pete ages in numbers only, and the fact that he finds himself in the same hallways of the same school as a teacher years later is telling demonstration of this.