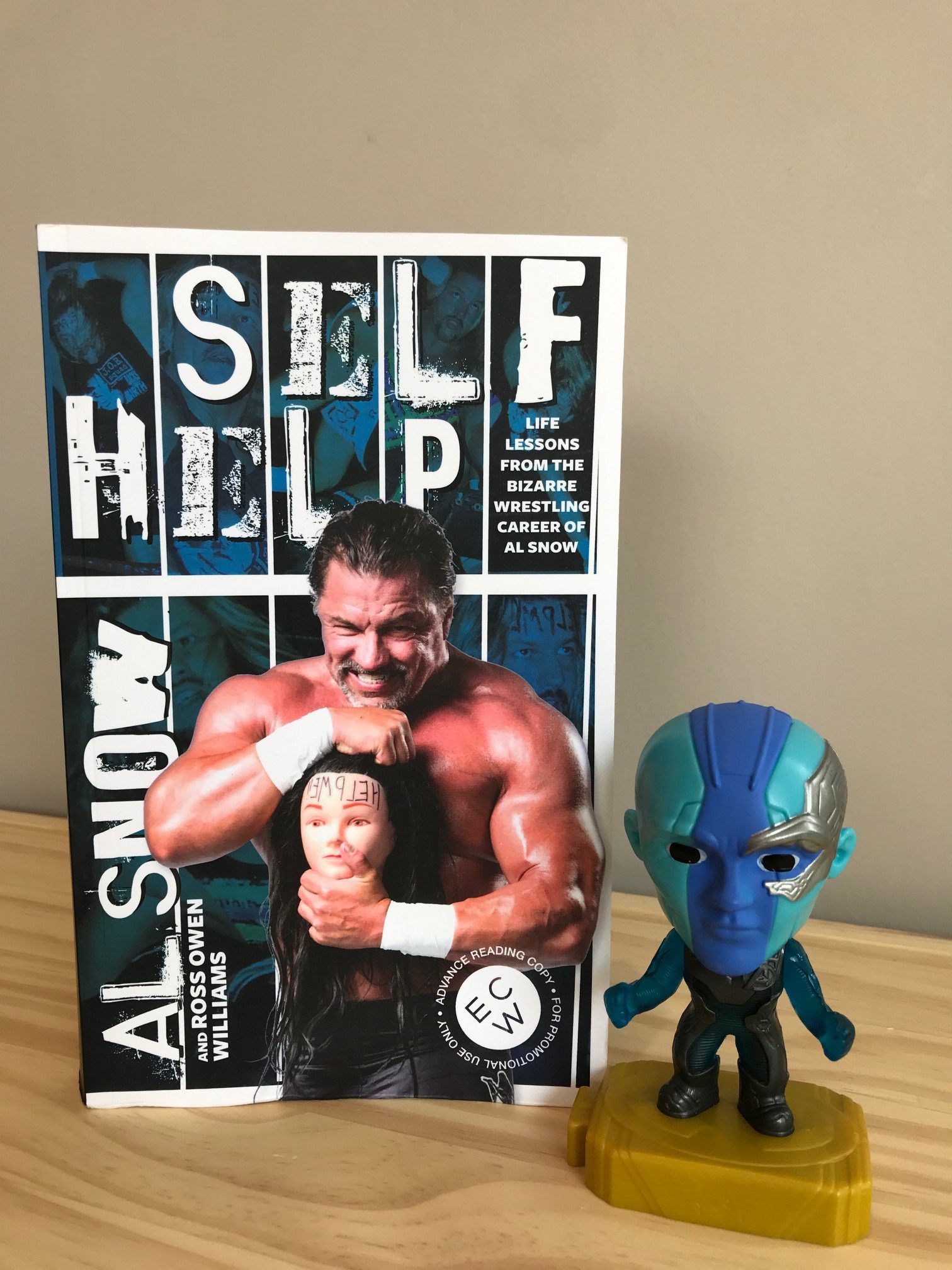 Now that I review and recommend books professionally I’m attempting to be a well-rounded reader, which in my mind means that I read a wide variety of books, even books that I suspect I’ll dislike. I’ve fulfilled this promise to myself by picking up a memoir written by a professional WWE (World Wrestling Entertainment) wrestler, Al Snow. Self Help is just what the cover promises it to be: stories from his bizarre wrestling career. Knowing absolutely nothing about wrestling and having no desire to know more about it, this was admittedly an ambitious choice for me to pick, but despite myself, I will still recommend this book to wrestling fans, or fans of Al Snow, simply because it’s entertaining.

The idea of self-help is a framing mechanism to shape Snow’s narrative so throughout the book he includes one-sentence tips, but more often than not they act as descriptors for what’s to come in that section. I wouldn’t necessarily count “If you’re going to get a tattoo, make it memorable” (p. 237 of ARC) as sage life advice, but it does give the reader a hint as to what the upcoming antics may entail. There are practical lessons hidden between the lines however. Snow relates the trajectory of his wrestling career; the painful (literally) beginning, the ups and downs of his various contracts and television appearances, as well as some brief and cursory references to his personal life throughout his rise in the industry. He names names for the most part, so it does read like an insider guide to what really goes on backstage, but it’s obvious he has a lot of respect for others he worked with, so he writes in a fairly balanced and humble way.

Even though I’m trying to be a very balanced reviewer here, I will comment on some of the things I didn’t like in this book, and the fact that I don’t watch wrestling doesn’t affect these things. Women seem to play a very limited role in Snow’s life, which is fine, but the way they are described in terms of their appearances first, irked me. Females seem to be held to a different standard in his mind; he likes them if they are ‘nice’, placating, and eager to listen to other men in their lives, yet the career advice Snow doles out throughout the book seems to suggest people do the very opposite to get ahead in wrestling. Did I expect this book to be a feminist manifesto? Of course not, it’s a memoir and Snow’s entitled to his point of view, but I doubt I’m alone in finding some of his comments offensive.

Snow also admits to doing some pretty horrible things to people when he wasn’t paid on time, things I won’t repeat or mention in print mainly because I’m hoping they were taken out of the finished copy. Or maybe they weren’t true at all, because wrestling itself is fake? Perhaps I’m being naive here. When Snow recounts a few unbelievable-sounding stories, I thought hoped that maybe these stories were just an extension of his wrestling characters, and exaggerated or made-up to simply provide some entertainment. What is made abundantly clear in this book is the fact that wrestlers are acting in a very physical and elaborate manner during their matches, which most people know by now, but Snow really emphasizes the fact that character building is key to success in his industry.

I’m really struggling with this review because as you can tell I found this book problematic BUT it deserves to be read by wrestling fans because it successfully ‘pulls back the curtain’ on this industry. It also delves into some of the challenges of producing a physically-demanding reality television series that Snow was on for a few years called Tough Enough, and even though I had never heard of this particular show, it was fascinating to learn about it, and I’m sure many readers, regardless of their interests would enjoy this portion of the book in particular. If you can leave your desire for political correctness at the door, you’ll find lots to keep your interest in these pages.