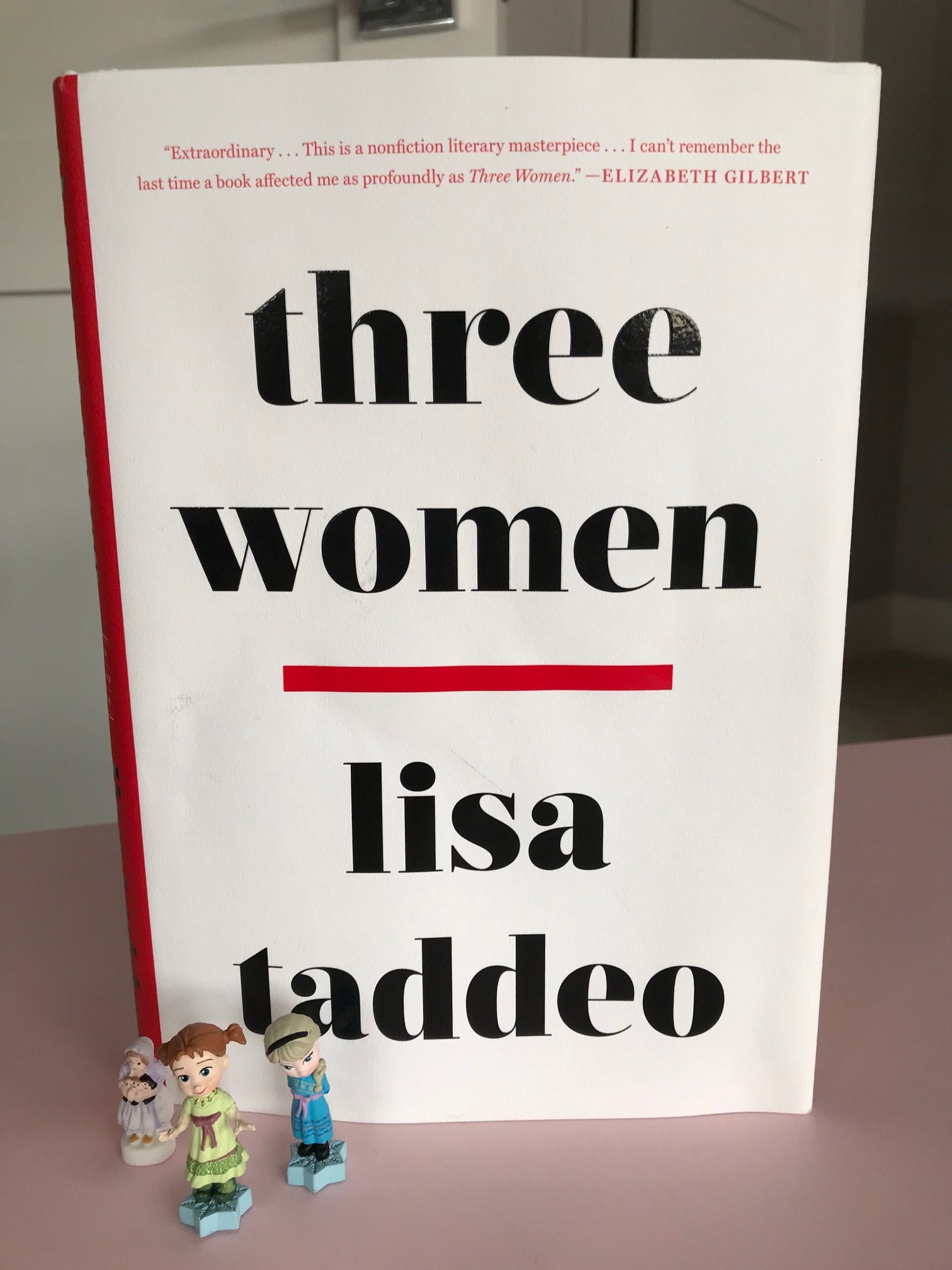 I read this book in the dead of Canadian winter; it’s January, and the temperature is hovering around minus 40 (Celsius) with the windchill factored in. This is the temperature at which it literally stings to breathe in through your nose (my Canadian readers will know EXACTLY what I’m talking about). Luckily this is the perfect book-reading temperature, and I’ve had Three Women by Lisa Taddeo to keep me warm. And my oh my, this book is…hot. And even more surprisingly, this book is non-fiction! Yes, a spicy non-fiction story, at your service (insert double eyebrow raise here).

Taddeo is a journalist, and she took a deep dive into three separate women’s love lives. Two of them remain anonymous, but are given the names ‘Sloane’ and ‘Lina’ for the purposes of this book. Sloane is wealthy, beautiful, a mother of two, and married to a chef whom she co-owns a successful restaurant with. She’s included in this book because her and her husband ‘swing’ in the sense that they invite other men and women into their bedroom-typically men of her husband’s choosing. Caught in a completely different situation, young mother Lina is married to a man who doesn’t want to kiss or make love to her anymore, so she begins an affair with her high-school romance Aidan, who is also a father. The third woman, Maggie Wilken, was involved in a high-profile sexual assault case. She accused her then-teacher Aaron Knodel of conducting a physical relationship with her while she was only 17 years-old. He later went on to win the title of North Dakota’s Teacher of the Year, which is when Maggie decided to come forward to tell her story, and since the book was published, he’s been acquitted of all charges. Taddeo alternates between all three perspectives, each exploring the idea of female desire, and how it affects their lives.

I was lucky enough to see Taddeo speak back in November when she visited Calgary’s Wordfest, when she explained the genesis for this book. She wanted to write about sex, so she traveled around America looking for people willing to speak to her about it. Not surprisingly, not many women wanted to discuss it. Once she found enough women who were willing to open up about their desires and their current love lives, Taddeo MOVED TO THEIR CITIES to get to know them and their stories as best as possible. If that isn’t an impressive dedication to journalism, I don’t know what is! And the writing clearly reflects how close Taddeo came to her subjects. It’s written as ‘creative non-fiction’, so for instance Maggie’s story is very descriptive of how she was feeling at the time of the (alleged) affair, how heart-broken she was, how isolated she became, etc. More than simply a run-down of events, this book places us in the shoes of each woman, which is uncomfortable because all three are being discarded or used up at one point or another in their lives (that’s sort of a spoiler, but not really).

So often, we hear about or observe the idea of desire through a male lens. What makes Taddeo’s focus on sex so (seemingly) provocative is that she’s focused on what these women want, despite the labels that may be applied to them. Lina’s chapters are by far the most explicit because she’s enjoying a rebirth of sorts; Aidan is giving her what she’s been physically yearning for, for years. Unfortunately, it’s obvious to the reader that Lina wants more emotionally than Aidan is willing to give. The story is somewhat similar in Maggie’s case in the beginning of her affair, and when she’s tossed aside as a vulnerable 17-year-old, the heartbreak she experiences is reminiscent of any teenage heartbreak, yet the stakes are much higher in her case, especially when her family experiences a life-altering tragedy just a few years later. Sloane’s story is different in that she takes up the smallest word count, and remains a bit ‘unknowable’ throughout. A shocking revelation about her childhood begins to re-frame everything that came after it, including a near-death experience, and I don’t think I’ve decided yet what I think about her; am I impressed or distressed by her current situation?

Judgement, and the way we paste over people’s lives with our own opinions is truly at the heart of this book. It’s impossible to read this book without judgement, but if you decide to pick it up (and I hope you do, as the hype it has received is well-deserved) just ask yourself what you would think about each of these people if they were male-would your opinion of them change? And for those who are curious, Taddeo confirmed that all three woman read the book before and after publication and were comfortable with the way they were depicted, so rest assured they were willing participants. For my Calgary readers, if this piques your interest, please join the We’ve Read This book club at the Wordfest office on January 29 at 7pm to discuss! You can register here.