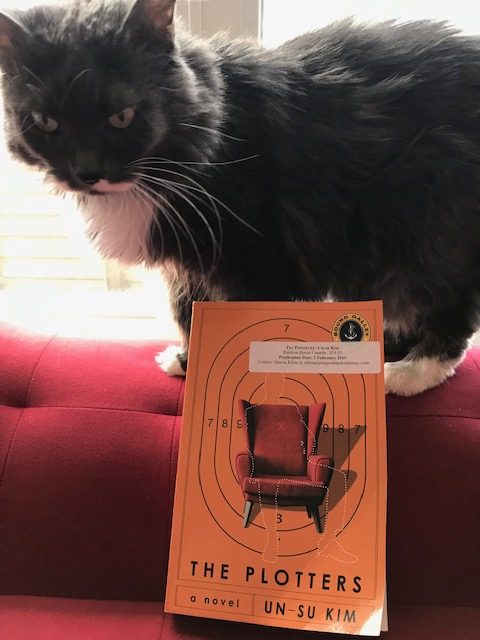 I think this book may be the most ‘masculine’ thing I have ever read, except for maybe a GQ magazine article about belts. The Plotters by Un-Su Kim, translated into English by Sora Kim-Russell features men, lots of men, and they’re either fighting, drinking, joking around, or doing all three at the same time. There’s a few female characters but they’re depicted as somewhat unknowable and strange, mainly because the protagonist and narrator Reseng is quite strange himself.

The book takes place in a slightly different reality than our own; there is a known but never discussed business in assassinations where one can have another person murdered easily, simply by contacting a plotter who designs the death plan for the victim then hires out an assassin to follow through with the plot. It’s a very large part of the criminal underworld in its particular setting of Southern Korea, although it seems as though it’s closely tied to the political world as well, so perhaps not as underground as one hopes it would be. Reseng is an intelligent and skilled assassin who was raised by a man named Old Raccoon; an old man who seems more at home in his library of musty books than discussing the death of yet another person. Reseng stumbles upon a complicated plot from a competing assassin and goes rogue, bouncing between dangerous players all in an effort to discover who he can really trust. Many glasses of scotch, whiskey and beer are downed in the process, all between violent bouts of knife-fighting, sharpshooting and good old fashioned brawling.

I really didn’t think I’d like this book. It took awhile for me to get into and there were parts where I didn’t understand what was going on because the plotting got quite complicated (probably not surprising, due to the title alone) but the plot isn’t what drove this novel for me, it was the characters. Reseng is a weird guy, he never went to school and was largely ignored by his caregiver; at one point Old Raccoon finds Reseng reading when he’s 9 years old, and upset that he’s learned to read at all, slaps him across the face. Obviously this scene was upsetting to me on many different levels! Despite this horrible upbringing, and his dangerous career, Reseng is still an empathetic character. He has two cats named ‘desk’ and ‘lampshade’, and he loves them dearly, taking them to a cat cafe to keep them safe after he discovers his life is in danger. He also tells the story of the time when he fell in love with a woman and lived a normal life for 6 whole months before once again answering the siren call of the addictive assassin lifestyle. Reseng is an impenetrable character, but I was still invested in him and the outcome of his own plotting, especially when he finds a bomb in his toilet…

So aside from all the cat scenes, another reason I liked this book was the focus on books and reading in general. Growing up in isolation, in an actual library run by Old Raccoon, books become Reseng’s only friend and companion. Because of this, he spends much of his spare time as an adult reading , using fictional literary situations as guides as he moves through life, referencing particular books or passages when he talks to people. As you can imagine, these bookish ramblings don’t endear him to others. Reseng doesn’t care though, he’s just living life for himself until he realizes his already short life is about to become even shorter.

This book has been compared to a Quentin Tarantino movie, although I would argue The Plotters is much less violent and not as funny. Still, I know many people who I could recommend this book to, and it’s an interesting look at a criminal business that may or may not already have roots in our own reality (I prefer not to think about it). Either way, it’s a worthwhile read because it’s so unique. I can’t remember the last time I read a book that featured such a polarizing character like Reseng.