A True Crime Battle: The Man Who Played with Fire by Jan Stocklassa vs. Chase Darkness With Me by Billy Jensen 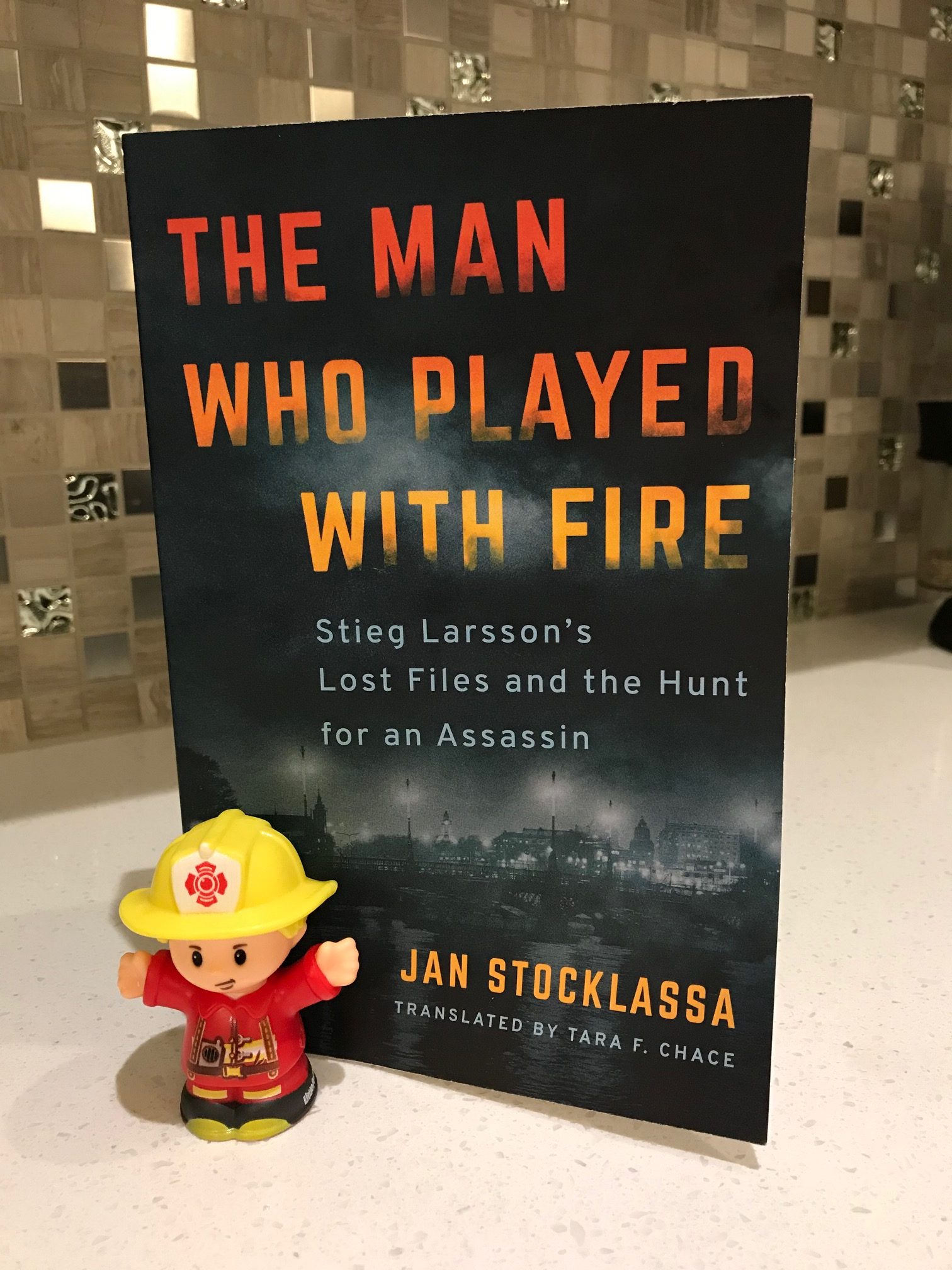 True crime is so hot right now. I’ve been reading a few and enjoying the experience, so I thought I’d jump right into the trend and compare two that had been begging for attention on my bookshelf. Both of these books are SO DIFFERENT, yet they both deal with the same thing: murder, and the despicable people who commit it. Each is for a very different kind of reader, so if this genre is one you are interested in, read on to find out which would suit your reading style best.

The Man Who Played With Fire, Stieg Larsson’s Lost Files and the Hunt for an Assassin by Jan Stocklassa, translated by Tara F. Chace is not for the ‘fair weather’ true crime fan. It’s dense, long, and full of names and historical events that won’t have much relevance for the North American reader. That being said, I know a lots of people will love this book because it delves into a famous assassination that has yet to be solved: the murder of Olof Palme, the Swedish Prime Minister in 1986. The detail and pacing of this book reminds me of The Spy and the Traitor by Ben MacIntyre, a non-fiction spy thriller that’s been on bestseller lists for over a year.

I had never heard of this particular event, but from what I’ve learned since, the death was Sweden’s version of the Kennedy assassination; it rocked the country, changing the political landscape drastically. Also unbeknownst to me, the now-deceased, Swedish author Stieg Larsson, the author of the blockbuster The Girl with the Dragon Tattoo book series was obsessed with finding the killer. Journalist Jan Stocklassa became involved in the mystery by chance, but once he started investigating he became hooked, securing the rights to Larsson’s research and archives, picking up where he left off in 2004. Jan refers to this book as a work of creative non-fiction because he re-imagines some of his Stieg’s time during the assassination investigation, but aside from those few liberties, this book is straightforward and fact-based, even including actual letters that Stieg had written to friends and law enforcement regarding the case.

Although there were some sections that were quite dry, Jan interviews some of the key suspects decades after the murder, travelling to Greece and parts of South Africa in an attempt to track down new clues. The plot revs up towards the end when he orchestrates an undercover operation in an attempt to coerce a confession from someone he believes was partway responsible for the murder. The lengths he goes to is impressive and somewhat baffling, but it’s fun to follow along on his adventures when you know he pulls through (physically) unscathed. The connection to Larsson seems a bit thin seeing as the two never actually met, but Larsson’s earlier research and dogged determination in dismantling right-wing extremists helps situate the assassination within a larger political and atmospheric framework, setting up the perfect environment for Jan to continue his work. This book won’t necessarily appeal to fans of Larsson, instead, people who enjoy immersing themselves in a particular historical crime will enjoy it; just be prepared to wade through a significant amount of analysis and theory first.

On the other end of the true crime spectrum we have Chase Darkness With Me by Billy Jensen, also a journalist and now author. This book includes a cursory look at LOTS of unsolved murders, most of them based in the United States. Jensen becomes obsessed with trying to solve these crimes once he realizes how many killers are walking free, so he begins to crowd source tips from the public via facebook ads in an attempt to help police. This strange hobby of his turns into a full-time job as he works on true crime shows, podcasts, even speaking at true-crime conferences (yes, they have those!). He continues to work with families as a ‘victim’s advocate’, sending any information he collects to the relevant detective or police officer assigned to cold cases. At the end of the book he includes step-by-step instructions on how to become a victim’s advocate yourself, for those who are obsessed with true crime and want to help solve murders that their local police department don’t have the resources to themselves.

I had to keep reminding myself that I was reading a memoir, because I became frustrated early on in the book when cases would be mentioned, given a page-or-two of detail, effectively roping in my interest and empathy, then dropped unceremoniously with no conclusion or updates. It’s hard to jump from reading about a child-killer who has never been caught to a totally different kidnapping that happens a decade later-the book moves quickly, and in complete contrast to The Man Who Played with Fire, there are so many cases going on that it’s sometimes difficult to keep track of them.

Despite the unrelenting number of cases introduced, the book is accessible, written in a very conversational style with Jensen speaking directly to the reader, whom he assumes is a true-crime fanatic like himself. The foreword is written by Karen Kilgariff, cohost of the My Favorite Murder podcast and co-author of a memoir I reviewed last year. Fans of her podcast and book will no doubt want to read this book as well because they speak to the same audience and reference each other’s work. What’s different about Billy’s book is that his includes a natural call-to-action; he invites people to get involved and try to help their local police force solve these cold cases by volunteering their services, for example he suggests helping them digitize their files so cold cases can be easily searched to look for connections, clues, etc. His addendum “So You Want to Help Solve a Murder?” is where I found myself getting uncomfortable. Although he’s quick to point out that vigilantes are bad and he’s not encouraging that kind of behavior, his stories of becoming obsessed with crime made me feel a) badly for his wife and children as he readily admits that he spends almost all his waking hours on solving murders, and b) a bit anxious that a bunch of people are going to feel vindicated in their obsession with certain crimes, and go even further in their ‘pursuit of justice’. It’s all well and good for him to warn the public of the ‘right way’ of doing things-but when has that ever worked? People are the worst, no one ever listens to good advice!!!!

I tend to be a Nervous Nelly at the best of times, so I doubt others will get that same uneasiness that I did, and quite honestly, Jensen is giving people what they want with this book. The resurgence in popularity of true crime is unmistakable, and he does an extraordinary job at convincing us this new interest and energy can be channeled into helping others by finding peace for victims and their families. His persistence is admirable, and if it motivates others to spend their time fixing the wrongs of the past, there’s nothing to complain about there. And even if you don’t find yourself joining your local police force at the end of this book, you’ll find yourself utterly absorbed with the ups and downs Jensen takes you on.