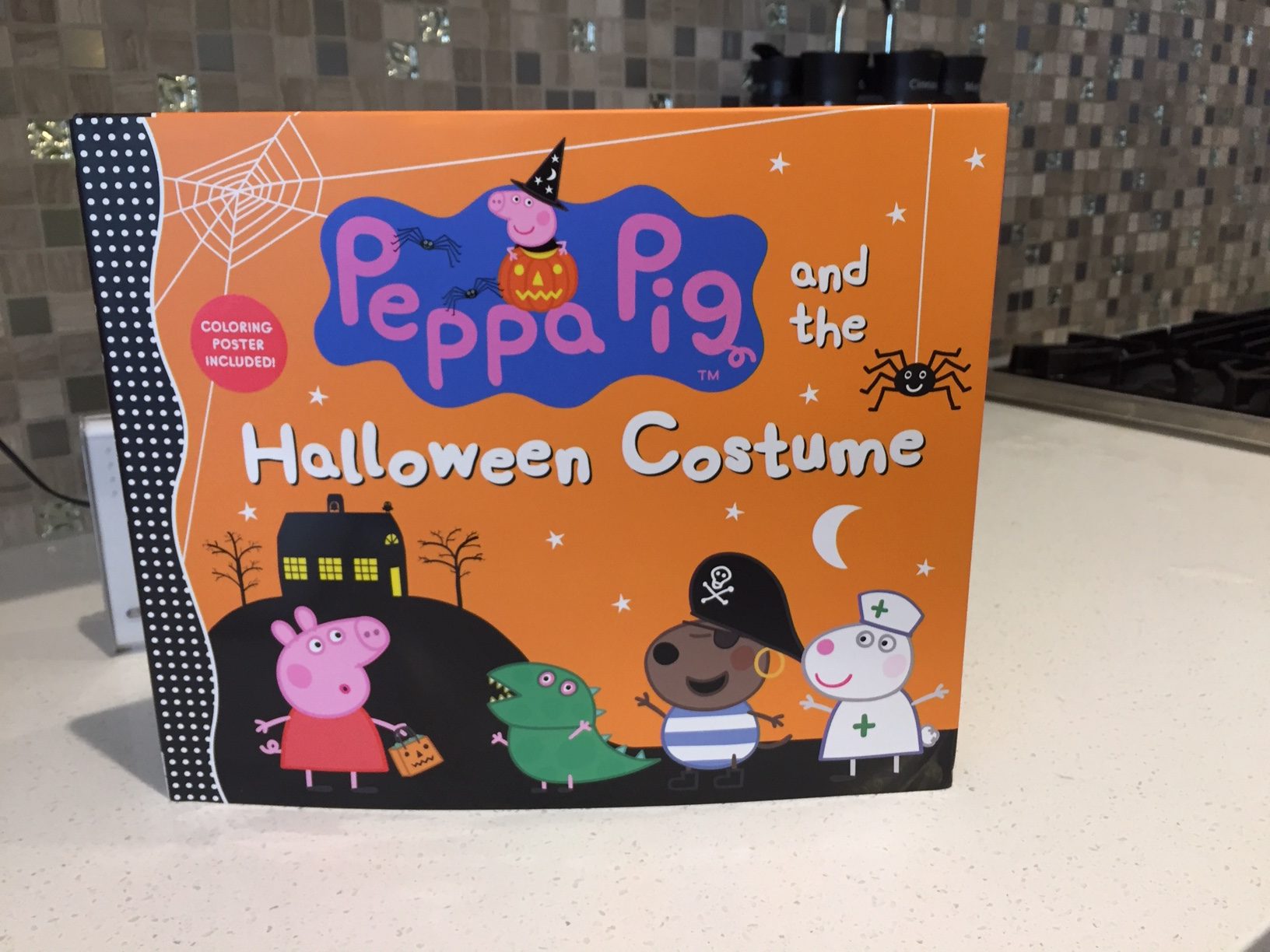 We get really excited about Halloween at our house. Pre-kids, my husband and I used to have a huge costume kegger each year, but now that we’re parents we decorate our house, go trick-or-treating, and attempt to get our oldest into the Halloween spirit without scaring her too much. So when Penguin Random House Canada sent us some of their latest Halloween picture books to review, both myself and my kids were VERY excited. Below are brief reviews of the four books we received, along with some pictures that depict the general messiness of our house. 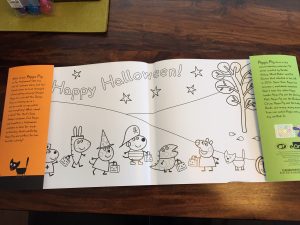 The first book that needs no introduction is Peppa Pig and the Halloween Costume. Now, quite frankly, any Peppa Pig book becomes a quick favourite in our house because my three year-old adores the characters;  it could include words that don’t even string a complete sentence together and she wouldn’t care, it’s amazing because it’s Peppa. This book in particular is a hardcover, and the book jacket has a colouring page on the inside, so there’s a bonus activity that all parents can appreciate; once you’re done reading the book together, the kids can busy themselves for AT LEAST another 15 minutes colouring. #parentingwin 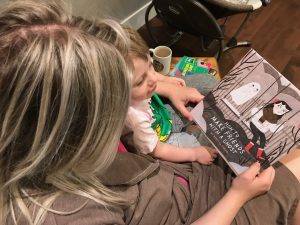 Here we have the ‘hipster’ ghost book

Next up is How To Make Friends with a Ghost by Rebecca Green. This is a ‘hipsterish’ halloween picture book, as the illustrations are made up of pencil sketches in shades of gray and black, with a bit of red and pink thrown in. I personally enjoyed this one because it’s an interesting story with an adorable ending; it’s basically a guide on how to meet and care for a ghost as it becomes a companion, and then the end of the book describes how befriending a ghost now is befriending one for life because it will stay with you as you age so you can be together after you die. The message of this is a bit old for my three-year-old, as I think the concept of dying is still pretty hazy to her, but I found it really heartwarming, and it’s a nice way to demystify the spookiness of ghosts in general;-we should see them as our friends, rather than something to fear. Again, I also really liked the style of illustrations, but it’s not the bold, colourful bubbly pictures that my kids seem to prefer at this stage. 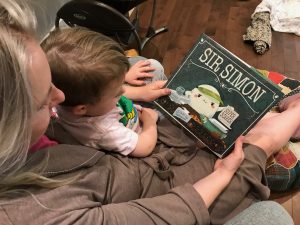 On to Sir Simon, Super Scarer by Cale Atkinson. This is one of my favourite authors and illustrators, the humour in his books appeal to both myself and my kids, and his art is just what my daughter loves (see above). This book is about a ghost who is assigned a house to haunt, and then a young boy (Chester) who moves into the same house. After Sir Simon tries to teach Chester how to haunt for him, they decide to just help each other with their own chores and learn about the difficulties of being a human and ghost respectively. Together, they realize they have lots in common because Chester is forced to move around a lot (he lives with his grandma) and Sir Simon is always on differing ‘ghosting’ assignments, so they overcome their loneliness together and become best friends. My only complaint with this book is that it’s really long for a picture book-I counted 45 pages! There isn’t too much text on each page so it’s the perfect amount of reading for my daughter to keep her interested before we flip to another picture, but as a parent, sitting down to read this with your little one requires commitment, I’m talking a good 15 minutes of reading here. 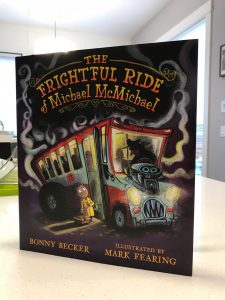 Lastly we have The Frightful Ride of Michael McMichael by Bonny Becker, illustrated by Mark Fearing (great last name, no?). Again, I really enjoyed this book, it’s about a young boy who boards a VERY CREEPY bus late at night, trying to get to his grandmother’s house. As it becomes clear the bus and/or bus driver may try eating him towards the end of his route, Michael McMichael unleashes the creature hiding in the basket he’s holding, which eats the bus driver instead. There’s no feel-good message in this one (other than something to do with bravery) but it is a great deal of fun to read. The only problem with this book is that the pictures are really scary, and my daughter didn’t want to read it at all the first few times we attempted it. But, I’m the ‘exposure is best’ kind of parent and in an attempt to rid her of her fears, we read this in silly voices and she’s starting to warm up to it. I don’t think it’s a case of this book being too old for her, because the text is quite simple and sparse on each page, I think she’s either just a wuss, or the pictures are a little too scary for her age group.

So there you have it, four different Halloween treats that won’t bankrupt you at the dentist in November! I’ll have an adult spooky read for you by the end of the month too.