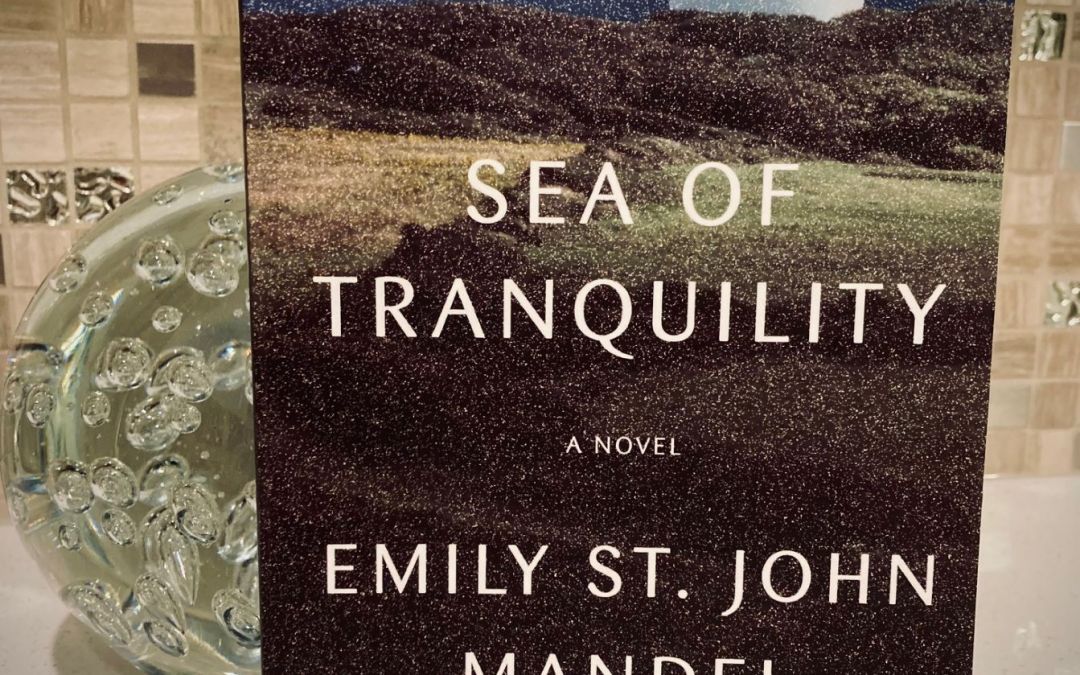 There is something so soothing about Emily St. John Mandel‘s writing, even when she’s describing a world that sounds intimidating. Her newest book Sea of Tranquility features a few characters from her last mega-hit The Glass Hotel, but you don’t need to have read that one to enjoy this significantly shorter read. It’s 255 pages but there aren’t many words as the spacing is quite extended beyond a typical page setup so it was easy on the eyes for those who prefer bigger type. Time travel is the focus of this one, although pandemics play a large role too. Apparently she wrote it during Covid lockdowns, which makes a whole lot more sense when you read it.

We meet a variety of characters in this book: a British man who foolishly speaks out against the empire and is cast out of the family to the wilds of Canada, a woman who seeks out an old friend after they are both betrayed by their husbands’ participation in a ponzi scheme, a young mother and bestselling author who is promoting her latest book on tour when a pandemic hits, and a man who is sick of his job, sick of his life, and ready to risk at all for adventure. Each character lives in a different time period, but only one of them, Gaspery, has the ability to travel back and forth through time. Gaspery is sent to different points in history to try to heal the rupture that is discovered only by recognizing the haunting violin music which signals the overlapping of different universes and their associated timelines. This anomaly is discovered in the year 2401, where colonies have been created on the moon, as life on Earth is getting increasingly more difficult with climate change. Still, people live on both, simultaneously travelling back and forth like we do now on airplanes. Book tours are also a thing, as is a clearly veiled reference to zoom meetings (and no, the technology of zoom doesn’t change much over the years either).

Mandel’s writing has a quality I can only describe as slow suspense. Major conflicts happen off the page, either before, after, or adjacent to the moment she’s writing about, so although we get a sense of seriousness surrounding the situation, we can still stop and relate to that pounding headache that just won’t go away in the narrator, or the impossibly green leaves of the tree they are standing under. We feel a sort of kinship with the characters, which means that when are are introduced to a new person, situation, or time period, I felt a sense of longing to return to the previous section because I wanted to ‘be’ with each one for longer. This also speaks to Mandel’s ability to return to a few characters in this book from previous novels – we aren’t the only ones who want to dive deeper into these numerous worlds she’s dipped her toes into.

There is a larger, overarching intention behind the time travel from the future she describes, but it isn’t one that involves ‘saving the earth’ or some huge implication such as that. Instead, it’s human selfishness that drives this travel, which makes the trip less anxiety-inducting, and more curious than anything. Despite the fact this book focuses on the breakout of a new pandemic, I didn’t find my anxiety ramping up like it has in previous novels about pandemics. The future sounded quite pleasant actually. Those who live on the moon live under a dome which is climate controlled, which quite honestly, doesn’t seem all that bad. The rain is scheduled, but I could easily get used to that. And there’s so much that we can relate to; going to and from a job, visiting family in different places (planets), even our time traveler worries about his pet cat while he’s going back in time. And of course the unease around a pandemic is also touched upon, so there’s much to identify with in this novel, even if a great deal of it takes place before and after my own lifetime.