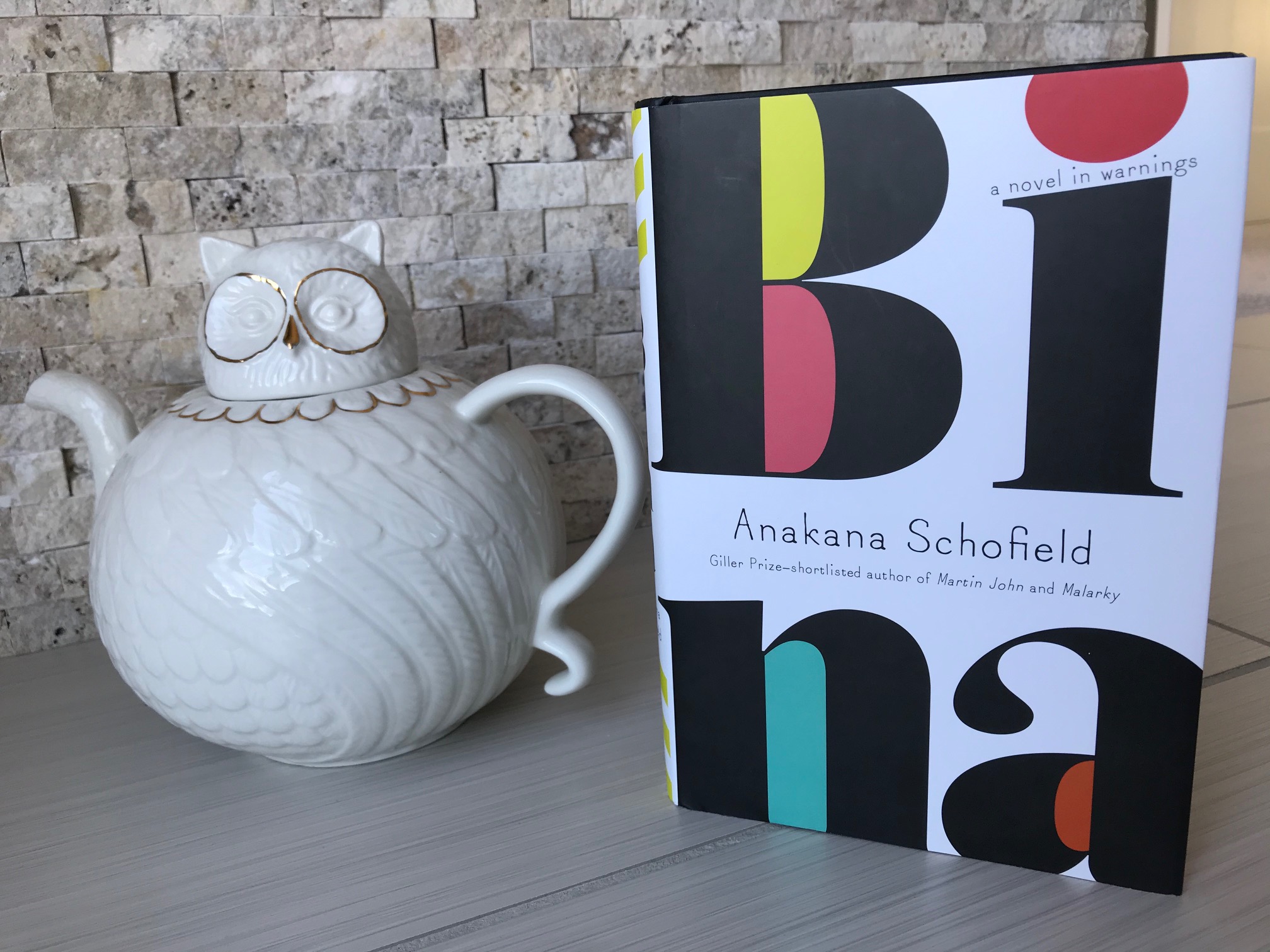 The last thing anyone wants to hear right now is a warning. Haven’t we had enough of those? Even our traffic signs are being switched over to reminders about good hand hygiene. Although I agree this is all necessary, I’ve reached my limit of cautionary tales right now. Or, at least I THOUGHT I did, then I read Bina by Anakana Schofield* and I realized I was just sick of hearing a particular TYPE of warning. A book written by a woman who’s simply had enough? Now that I can get behind.

Bina is a strange little novel, and those who have read Schofield’s other books won’t be surprised by that (this is the first of hers I’ve ever read). It’s about a 74-year-old woman who is writing down her regrets in hopes of preventing other women from experiencing the same setbacks. The book starts off with her explaining that inviting men into one’s home never turns out well. To illustrate her point, she describes a man named Eddie who crashes his motorcycle into the side of her house, and for some strange reason (her motivations are never truly explained) she allows him to move in with her. It quickly becomes apparent he is not only abusive, but a criminal, using her backyard to dump things like medical waste. Meanwhile, a ‘tall man’ also comes round regularly to meet with her about some highly secretive activities they’re engaged in, and although Bina seems conflicted about the things she does at his urging, it’s clear she truly believes she is helping others.

I’m being purposefully vague here because piecing together Bina’s actions and what she’s actually referring to during her rants is half the fun of this book. Everything is seen through her eyes, so it takes awhile to grasp what she’s actually talking about, and because she’s the type of person that seems to attract weird people, it’s an ongoing battle for the reader to understand how each person fits like a puzzle into her life. Because she’s recalling things that have already happened (at least, that’s how I read it), the timeline is a bit muddled, but ultimately that makes no difference to Bina. She wants you to listen carefully to what she has to say, because it’s the message that matters most.

Although I don’t know how the author feels about this label, I would call this a work of feminist fiction. Bina is sick of people’s crap, and she’s not afraid to say it. Her biting sense of humour is a balm to anyone’s frayed nerves, this is one of my favourite lines:

“When you tell men how you actually feel about one of them they don’t like it…We’re always to be jollier than them or they’ll turn on you and call you bitter and a miser. Find me the one woman in Dickens who is allowed to be utterly miserable. Find me her now while I put the kettle on…” (p. 84 of ARC).

To be clear, laughing along with, or even acknowledging the truth of this passage doesn’t make you a man-hater. I love my husband, and many other men I know aren’t like this at all. But Bina is pointing out the a general gender bias that most woman can probably relate to. Bina represents the elderly grandmother whispering in our ear how important it is to keep your own bank account even while married, or the kind aunt who encourages us to voice our opinions loudly, no matter the label attached to you. I’ve noticed an unfortunate pattern of late; older women who insist on pointing out how much harder they had it, claiming younger women are spoiled because things are so much easier now. While that is no doubt true (I read historical fiction, I know it’s easier now!) that doesn’t mean we shouldn’t be trying to improve things for future generations. This is Bina’s goal, in her actions and her warnings; a boost up for those who are following in her footsteps.

Once you do realize what Bina is up to it will shed an entirely new light on her character. Her words tell one story, while her actions tell a totally different one. Her dialogue is strict, short and snappy. The book is about 300-ish pages, but goes by incredibly quickly because many pages have only a few sentences on them, with lots of breaks in between passages. Although her writing tone suggests she doesn’t have time for anyone’s problems, and she basically states the same thing in so many words at the beginning, her biggest challenge is that she cares too much, which is what’s getting her in trouble with the law. Yes this is a book of warnings, but it’s also an ode to independent thought and decisive action, something many can relate to and need at this very moment.

*this link leads you to the publisher page where you can hear a short reading of the book by the author who has a beautiful accent, so I highly recommend this!