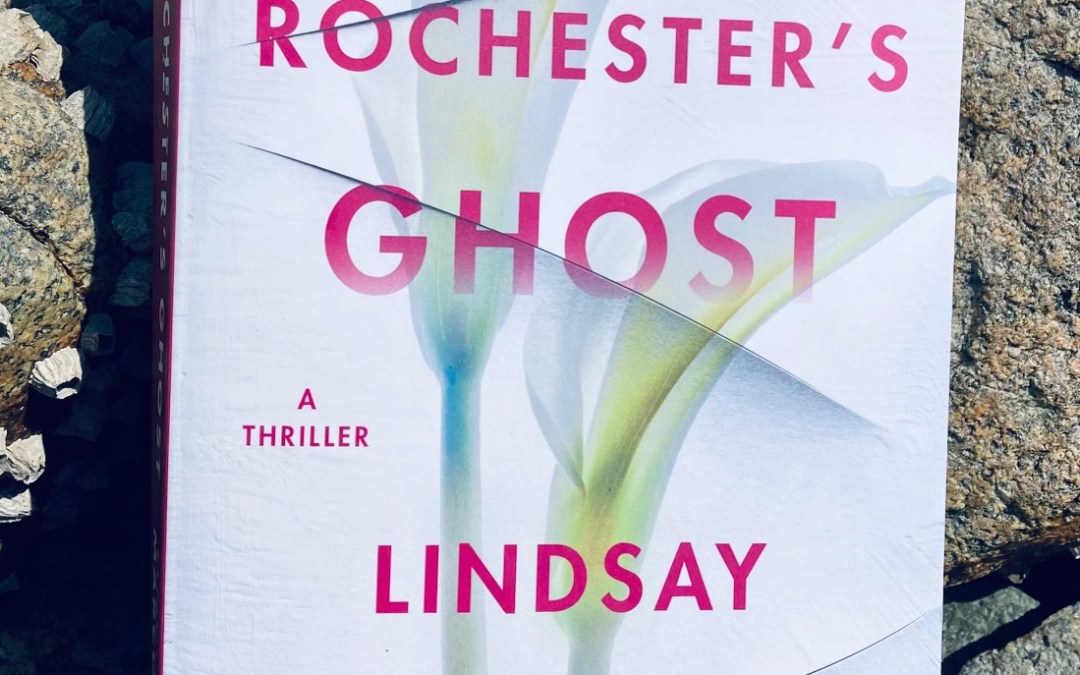 Well this is the perfect book to read on vacation, especially a summertime vacation! It takes place on a remote estate on the wild coast of California, complete with crashing waves, beautiful ocean scenery and a wild landscape easy to get lost in. I flew through this book and brought it everywhere with me while on a trip with my family, sneaking in a page or two while our car was parking, or someone was in the bathroom, or on a stretch of road straight enough that I wouldn’t get carsick from reading on. Mrs. Rochester’s Ghost by Lindsay Marcott was pitched to me as a modern-day remake of Jane Eyre (which I’ve never read, but feel like I should), so I figured I’d give it a try. This may be the closest I get in awhile to reading Charlotte Bronte, but to hell with the classics, I just loved this novel!

Jane has lost her job, has no boyfriend or family to speak of, and is struggling to make the growing payments on her credit card. Her friend Otis reaches out and offers her a strange job for the summer; a summer tutor for a teenage girl named Sophie who is the daughter of wealthy businessman and widower Evan Rochester. Otis is the live-in chef for the family at their aforementioned California estate. Jane accepts, expecting a sun-filled adventure to help lift her out of her jobless slump, but she quickly falls for the gruff but caring Evan, even though he’s clearly keeping secrets from just about everyone. Jane’s guest cabin is located away from the main house, and at night, she’s sure she is seeing a ghostly apparition that looks just like Evan’s deceased wife, the glamorous but severely mentally ill model Beatrice. Evan claims she committed suicide by walking into the pounding ocean waves, but rumours suggest he held her captive as her behaviour became more erratic, plus her body was never found. Jane is torn between her suspicions and her increasing devotion to Evan, not sure which part of her heart she should trust.

Although the romance storyline was expected, and teetered on the brink of obvious, I ate it up. The characterization of Evan Rochester was extremely well done; I veered between believing his innocence, and confirming his guilt many times throughout the book. Although told from Jane’s perspective for the most part, we get a few chapters from Beatrice’s point of view the day she disappears, and her opinions of Evan are not surprisingly, damning. He is a problematic love interest for many reasons, but that just increased the suspense.

The mystery itself is the crowning achievement of this book. Marcott does a superb job of throwing in red herrings to keep the reader guessing. I didn’t get annoyed by unbelievable twists or unfair revelations – it all felt like fair play to me, but many secrets were also gradually revealed which moved the plot along quickly. Jane herself didn’t come across as all that likely of a crime solver, she was so focused on Evan and her feelings swirling around him that she stumbled on the answers more often than not, but despite my ambivalence towards her as a protagonist, I still hoped that her love for Mr. Rochester would be genuinely reciprocated.

I’ll be perfectly honest, if I sat and thought long and hard about the set-up for this book, I’d start to think of questions and potential problems; how old is Evan compared to Jane? What are the chances this millionaire would fall for a broke writer after being married to one of the biggest models in the world? I don’t want to poke holes in this narrative, I enjoyed the ride way too much to ruin it now. Pack this book in your beach bag, or curl up with it inside when the weather starts getting chilly, but do add it to your TBR, you can thank me later!