Book Review: Wow, No Thank You by Samantha Irby 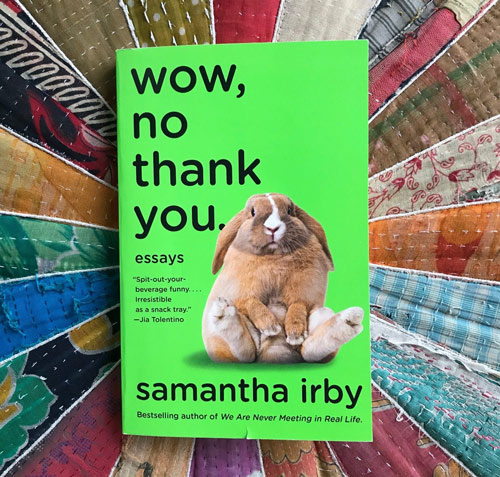 If I was a doctor, I would prescribe you this book as therapeutic medication during the pandemic. Wow, No Thank You. by Samantha Irby is exactly what you need right now, regardless of your circumstances, because it will make you laugh. I snorted. I LOL’d. I spit out my tea at one point, because Irby’s writing is just too funny.

The most interesting essays revolve around her career and her reflections on becoming a successful writer. And although she’s quick to point out she still doesn’t have much money (most authors don’t, regardless of how many books they’ve published) she does partake in some glamorous experiences, such as flying out to Hollywood to work on some web scripts, and pitching an idea for her own television show to various network executives. Her stories are hilarious and relatable because like many, she feels uncomfortable in her own skin, and she has considerable health challenges to deal with, Irritable Bowel Syndrome for starters. Luckily she’s had it for so long she’s learned to manage it fairly well, but not surprisingly it’s also great fodder for a comedy writer.

Even though I don’t have much anything in common with Irby, I still felt like she was saying things I may have thought, or wanted to say out loud but didn’t feel comfortable enough to. This quote does a great job of summing up her voice AND viewpoints in a few sentences:

“I hate nature! Birds are terrifying flying rats, and the sun will fry you and give you cancer, and large bodies of water are made up of mostly garbage and liquified human waste. I am a blue-state city slicker to my very core, content to ignore the outside world in favor of convenience apps and cable television.” (p. 154).

I personally love nature, but she’s right that birds are basically flying rats! I love watching her on video too, she’s so painfully honest that I find her irresistibly endearing.

I wanted to give a special shout-out to my book blogger buddy Melanie from GTL who introduced me to Irby. I haven’t read her two earlier books but if they are anything as funny as this latest one, I’ll definitely put them on my TBR.

A few words of warning; there is a ton of profanity in this book, but it didn’t bother me because it enhanced her writing rather than distracted from it. There’s also a lot of self-deprecating humour, so if you’re sensitive to someone making fun of their laziness for pages on end, this isn’t the book for you. Her writing reminded me a lot of Jenny Lawson’s memoirs, but honestly, I think Irby is funnier. I’ll leave you with more of her delightful words because we all need more laughter in our lives;

“These days people are always like, ‘Aren’t you rich now? You pick up the check!’ And, first of all, no! My books cost, I don’t know, ten dollars (?), and I know from Instagram that you borrowed yours from the library because you tagged me in the photo. And that’s fine, who cares, I support my local library, but we’re gonna have to go half on this pizza” (p. 264).