Most people would readily claim that someone in their family suffers from mental illness. Mind you, many of these cases are undiagnosed (or completely imagined), but everyone suspects at least one family member of theirs is crazy, because that’s really the only explanation for why they drive you crazy, right? Fire and Air by Erik Vlaminck explores the concept of actually having someone in your family struggle with a mental illness, and how this can affect one’s viewpoint of that person as time goes on. Spoiler alert: it’s all about perspective.

The book starts with a young Elly Verkest, living as an only child with her two parents who have immigrated to Canada. Then, her father abandons them, and Elly is left with too many questions, so she travels to Belgium, (her father’s ancestral lands) for answersk. There, she becomes pregnant by a passing acquaintance, and the book skips ahead to Elly’s daughter’s point of view. Perspective is important here, because when Elly is young, the reader is led to believe that her parents are eccentric, and could possibly suffer from mental deficiencies themselves. But, as the book continues, you quickly learn that their quirks are more normal than you once thought, and now Elly seems a bit off her rocker as you see her through the eyes of her daughter Linda. 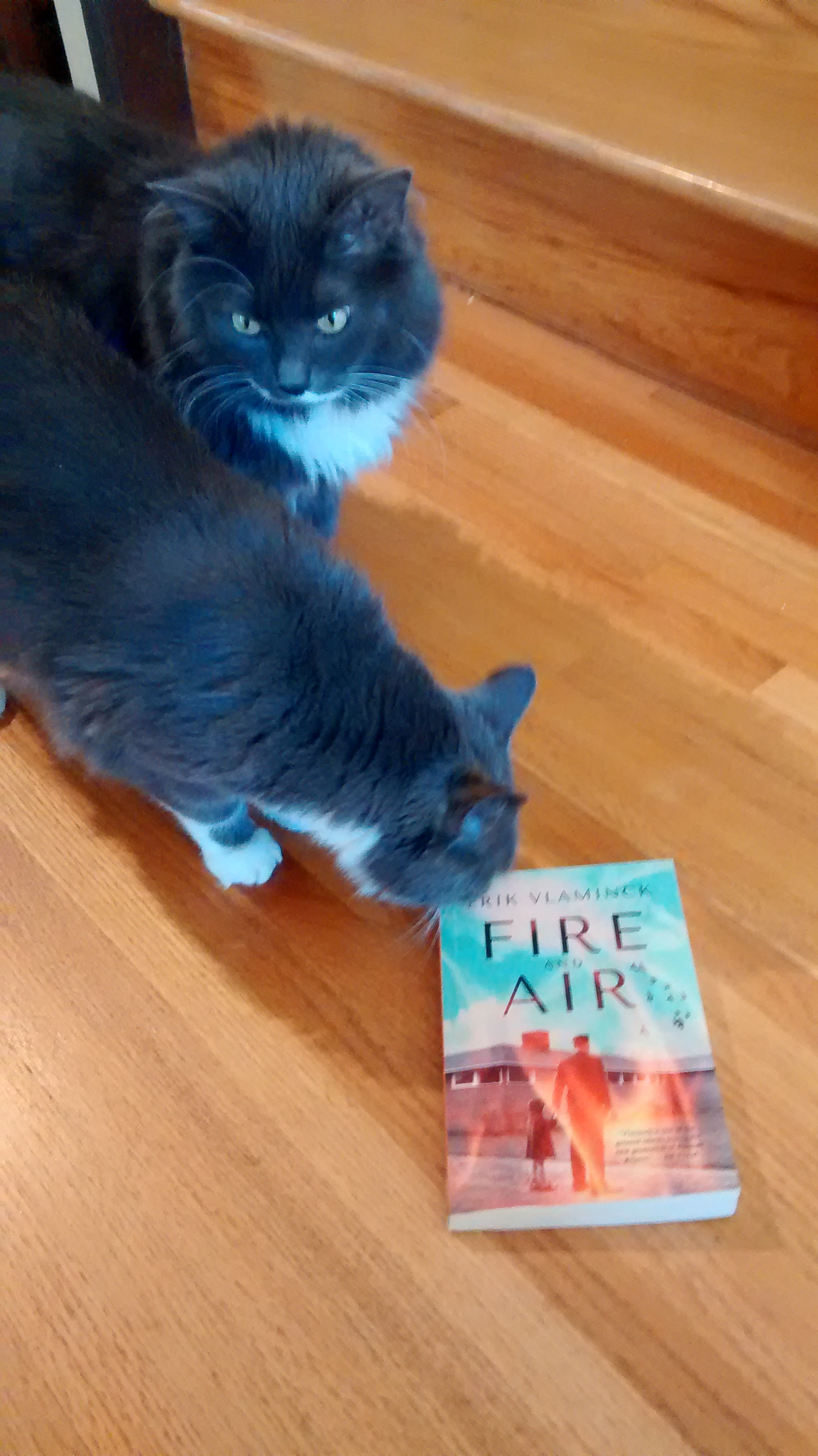 Smokey was ambivalent about this book, but Pearl was willing to take a look

So what does this all mean? Do all kids think their parents are crazy? Of course, that’s a rite of passage. But, when people (in this case characters in a book) are actually committed to mental institutions, we are supposed to take this as proof that they really are suffering. However as generations pass, what was once considered ‘crazy’ slowly becomes more acceptable, until the perspectives have varied so widely that medical opinions change as well. The characters in Fire and Air are constantly shifting along the personality spectrum as you continue reading, which is by far the most interesting part of this book.

Generally, I found the narrative a bit too short for my liking, because as the second generation of mother-daughter relationships began to crumble, I really started to find myself invested in the characters. The first half of the book is wasted on Elly’s childhood observations, which seem like a too-long preamble to the good stuff later in the story.

I also found Vlaminck’s writing too monotone. No phrases or situations really jumped out at me, and I wasn’t invested enough in the characters to come back to them a few days later. Fire and Air was originally written in Flemish by Vlamnick, and was later translated by Paul Vincent, so perhaps I’m just not the intended audience; I find certain cultures can adopt a style of writing that may not appeal to others simply because it seems so different. So, there was nothing in this book to make me hate it, but there was certainly nothing in it that made it memorable either.