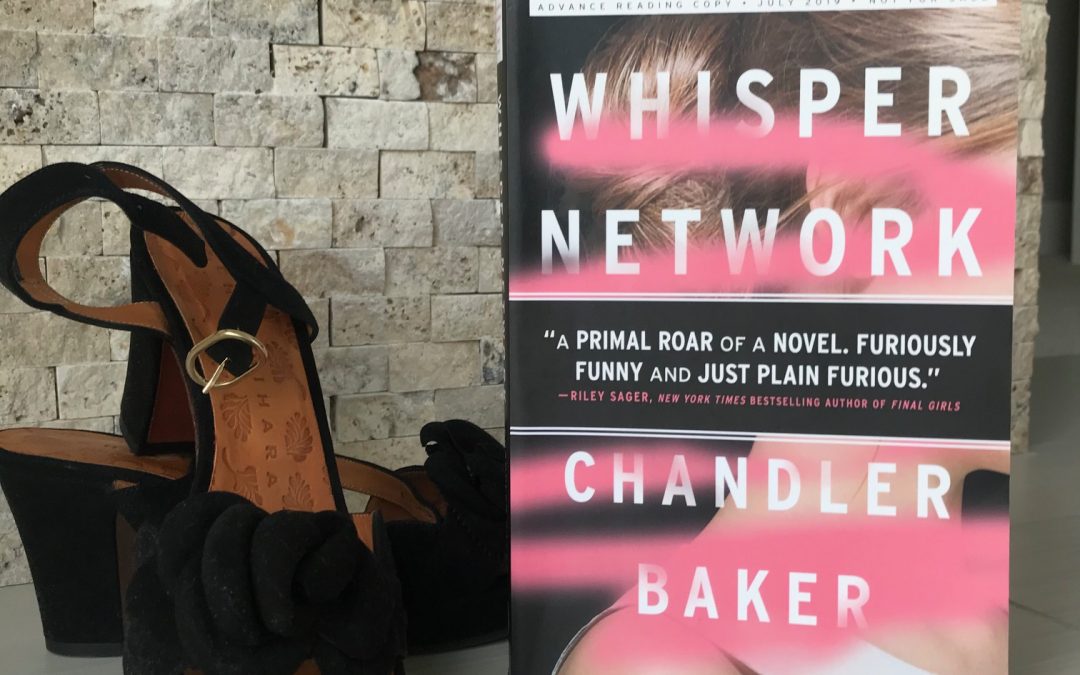 This is a deliciously naughty novel. Whisper Network by Chandler Baker is about a large sports agency with a robust legal team, and the office politics that go on inside its glass tower of prestige. I’d be lying if I said this book didn’t make me miss going into an office every day-the camaraderie, the boredom, the gossip, the relentless drive to stand out, it’s all in here. Including the bad stuff.

Sloane, Grace and Ardie all work together as lawyers, each of them have young children, and they’re all struggling to balance their high-expectation careers, family life, health, and friendships. A new young attorney named Katherine joins the team, and she seems to be getting extra close to their shared boss and well-known pervert around town Ames Garrett. While Ames is named as a potential candidate for the CEO role, an excel sheet is also making the office tower rounds, created by women to ‘out’ men who have sexually harassed women in the workplace. In an effort to protect any future prey from Ames, Sloane adds his name to the list, which cascades into a series of bigger problems, exposing each characters’ secrets and ulterior motives.

One reason I loved this book is that its funny. It has inside jokes and female-centric humour, and by that I mean the jokes are focused on the different ways men and women inhabit the world. Each chapter begins with commentary and descriptions written from the perspective of ALL WOMEN, so they use the words ‘we’ and ‘us’, grouping all females together in an effort to highlight the disparity between genders. One of my favourite quotes:

“No number of commercials in which women dove into pools wearing white swimsuits could convince us that our periods were a thing of swanlike beauty…we pretended that all of this was a myth. That we had neither fallopian tubes, nor menstrual cycles, nor breasts, nor moods nor children. And then we took it as a compliment when one of the men in the office told us we had balls. So, tell us again how this wasn’t a man’s world” (p. 115-116)

The humour and perspectives used in this book points to the double standards that women fact in the workplace, made even worse when the workplace is so competitive like the one these characters inhabit. But I also liked how this novel touches upon the disparity between socioeconomic levels. The female lawyers don’t have it as good as the male ones, that’s for certain. But then another character is introduced, one of the after-hours office cleaners Rosita, and we get a quick glimpse of how much harder she has to struggle for the same dignities afforded the other women. A burgeoning friendship between Rosita and Ardie is a heart-warming addition, but it’s clear that both sides are uncomfortable with the others vastly different financial situation. Rosita’s character and storyline was one I wanted to know more about, because Sloane, Grace and Ardie were so similar and stereotyped that I felt their presence become merely irritating by the end.

The pacing of the novel is just about perfect, I hated to put it down. Each chapter ends with an interview snippet, clearly taken from a formal legal meeting in the future. This type of foreshadowing often left me with more questions than answers, but it piqued my interest and dropped tantalizing twists that I looked forward to reaching along with the other characters. Because most of the people involved were lawyers, all the dialogue is smart, clipped and intelligent. And even though the story is about the office, there are lots of situations that take place in and around the women’s home life, a window into the Instagram-worthy lives they lead, but peeking behind the curtains to see what’s REALLY going on.

I also wanted to make a quick note of the fact that this ‘bad men list’ is about as close to non-fiction as possible. Even in my tiny industry, a list was circulating about bad men in Canadian media, and the CBC News even did a story on it. I saw a copy of the original excel sheet that circulated, and I could have added my own names to it, although I did not. All of this, the lists, this book, so many other things are in reaction to #metoo and the growing movement that encourages women to speak out about the sexual harassment they’ve experienced. Is creating a crowd-sourced google sheet the answer to this? Probably not, but there’s no denying a whisper network between women has, and will always exist when it comes to things like this.