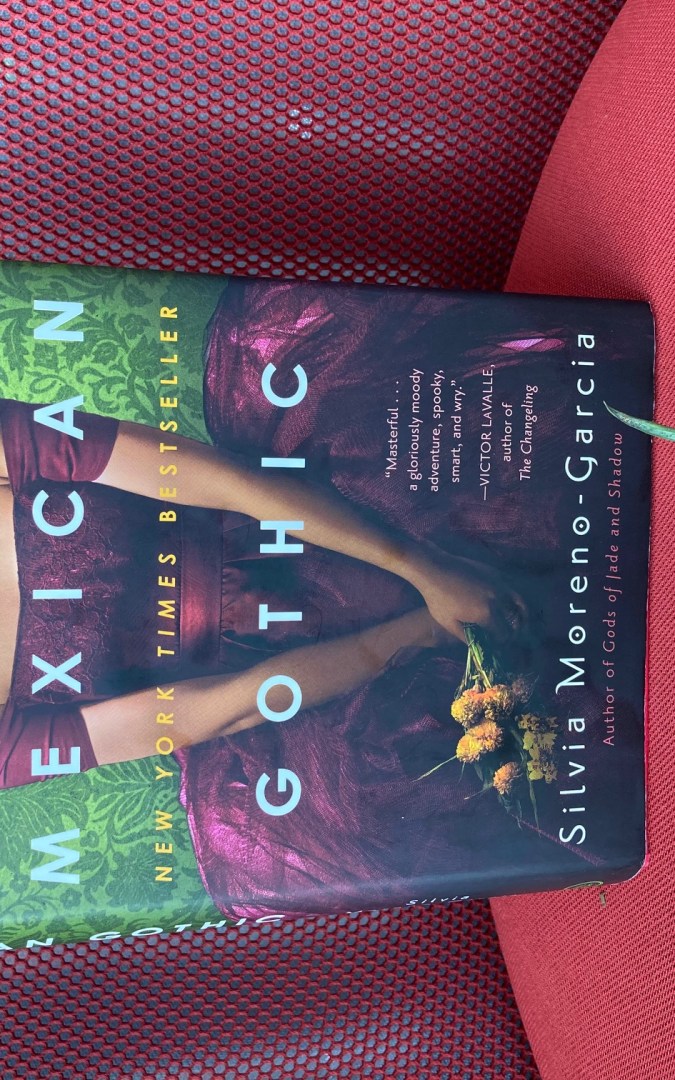 Caught up in the buzz of Fall book season again, I jumped at the chance to review Mexican Gothic by Silvia Moreno-Garcia which seemed to be on everyone’s must read lists for 2020. My blogger bud Melanie over at GTL reviewed this book a few weeks ago with a warning that the first 150 pages are slow, and this is a completely accurate statement. However! I pushed through at her suggestion, and I’m glad I did because things really speed up and crystallize in the second half. Apparently this book is also going to be made into a miniseries for Hulu, which is always a sure sign of a good read. The elements of gothic literature are well and alive in this story, so if the idea of a spooky house, strangely quiet characters and a dangerous landscape all appeal to you, be sure to pick this one up.

It’s 1950 and Noemi is sent to High Place, a crumbling mansion in the Mexican countryside to check on her cousin Catalina who is ill and has been sending her family strange letters since she moved away with her new husband. In her letters Catalina claims she is being poisoned, and although Noemi is reluctant to go to this creepy place she’s never seen, she’s concerned about the mental state of her cousin. Upon arriving at this derelict house high on top of a mountain, with only a treacherous road that leads in and out, Noemi realizes how racist the Doyle family truly is when the patriarch begins speaking of eugenics, the power of their English bloodline, etc. To make matters worse, the rules of the house grate against Noemi, where she’s forbidden to do basic things like speak at dinner time. She’s rarely allowed to see Catalina because apparently she’s suffering from Tuberculosis (this is clearly not the case), and a strange mold is growing up the walls of each room. Catalina’s new family claims she is being taken care of and will recover, but when Noemi is sent down to town on a secret trip by her cousin to procure a special tincture, Noemi learns of the horrific history of High Place which beings to explain those strange dreams she’s been having. After too many pages of dithering about and exploring the decrepit grounds of the house, we finally get to the scary stuff, which will please just about any horror reader.

Aside from the slow start, I loved everything about this book. The weird family and their ugly huge house create the perfect atmosphere ripe for terror. The history of the Doyle family and the gradual way it is revealed both builds suspense and colours the politics of that time period (in a very surface way, no in-depth analyzing here but it helps situate us as readers). Like all haunted houses, this one is anthropomorphic, not just in it’s dizzying case of mold and rot, but the walls themselves pulsate with life, a constant dull buzzing always present in the background. It’s not until the last few pages we discover what this buzzing actually is, and I won’t spoil it for you but it’s as terrifying as you would expect.

Noemi is the only character we ever really connect with in the book. Every other person remains distant and difficult to understand, which added to the feeling of isolation the reader experiences when seeing the world through her eyes. Despite her drab surroundings, Noemi is a bright light that relies on her mischievous attitude everywhere she goes, and it’s not until circumstances reach life or death proportions that she struggles to keep that lightness alive. She loves going to parties, dating different men, driving her convertible around, and studying a wide range of subjects. At first glance she comes across as shallow, but as the daughter of a businessman who made his fortune in paint, she’s gleaned an impressive amount of knowledge about chemistry, which comes in handy later in the narrative. Her wry humour is a welcome spot of relief in the darkness of the plot, and she comes across as delightfully progressive for the time period: “Noemi’s father said she cared too much about her looks and parties to take school seriously, as if a woman could not do two things at once” (p. 42). Catalina is described as a woman desperate to find her fairy-tale prince, and although she does end up living in a castle (of sorts), she has clearly made the wrong choice. Noemi’s independence may be frowned upon by society, but it’s her bravery that keeps her safe as the situation takes a dire turn.

Moments of lightness, a unique twist on the typical haunted house story, and a societal critique all wrapped into one scary little package, Mexican Gothic has a lot going for it once it hits its plotting stride in the second half. Take your time while reading the last few chapters, there’s lots of little threads that get wrapped up while the characters are shrieking with horror and you don’t want to miss the intelligent commentary that’s hidden in the depths of High Peak.