Double Book Review: Through the Garden and What the Soul Doesn’t Want by Lorna Crozier 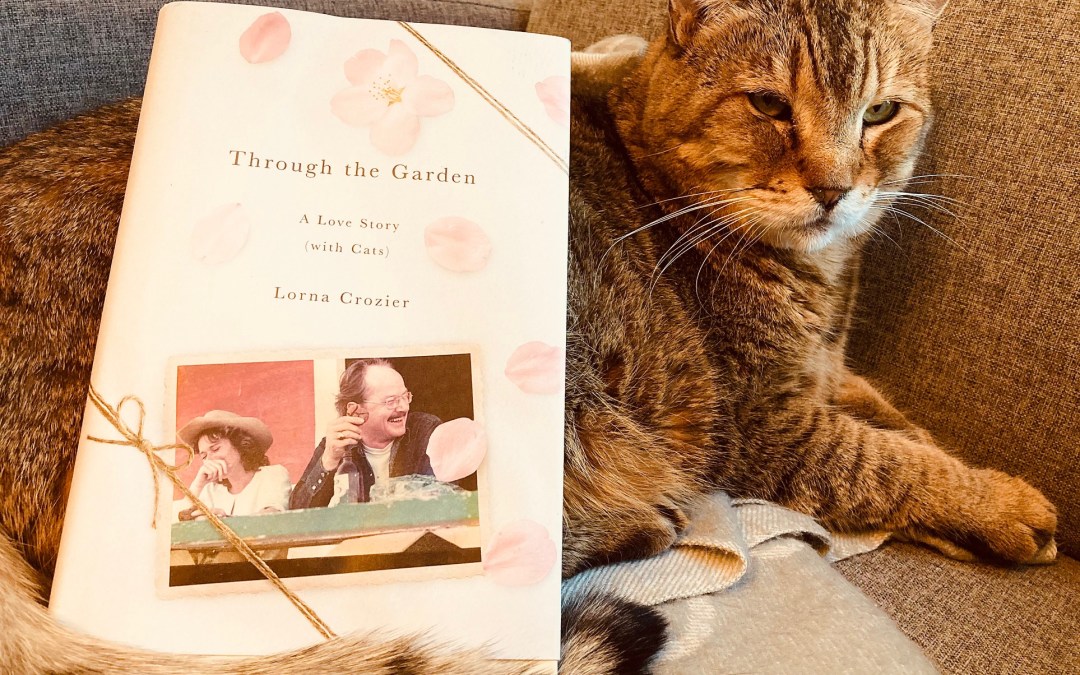 Poetry isn’t something I read often; every once in awhile I’ll pick it up, but I really don’t look forward to it, and there are way too many novels on my shelf to ignore. But you may find it surprising to hear that my second favourite author (David Sedaris is my first) is the Canadian poet Lorna Crozier. Have I read every poem she’s ever written? No. But when I see her perform, or when I read something of hers it takes my breath away. The beauty of her words are unmatched, and she’s a Canadian treasure. She also has a colorful life; leaving her husband for the famous Canadian poet Patrick Lane, they were together for decades, right up until his death in 2019. Through the Garden, A Love Story with Cats is a book about their life together, but also about Lorna herself; parts of her childhood, her marriage before Patrick, the sometimes volatile but always passionate life she led with him, and of course, their cats.

Having met at a poetry workshop and running away from their respective marriages, then struggling through Patrick’s alcoholism, this couple is all too familiar with the ups and downs of relationships. But they are destined to be together, and they settle into a life that most of us can recognize; domestic contentment that swirls around beautiful gardens and a small group of cats that come in and out of their lives. Patrick is 10 years older than Lorna, so when he falls ill, it comes as no great shock, but they are both devastated when it slowly dawns on them that he won’t be recovering. This book is dotted with poetry, both Lorna’s and Patrick’s, and it jumps around in time. We learn of a particularly entertaining (though probably not at the time) instance when Lorna is faced with one of Patrick’s old lovers, and sparks literally fly. But their tumultuous beginnings are balanced by the mundane as they grow older. Being poets, the descriptions of their gardens and their routines around them are a calming force in both the story and their lives, so much so that it’s difficult to reconcile their wild beginnings with the charming photo of them at the end of this book – laughing together, content, on a park bench.

A mixture of poetry within prose is my favourite kind of book – it allows time and space to sit with the poems, but the narrative still moves readers along on a traditional story arc, forming a comfortable push and pull that helps us set our own individual pace. As I mentioned above, Lorna’s poetry is my favourite, but we also get some of Patrick’s poetry, which she uses to illustrate a particular phase in their relationship, or simply give examples of his talent. The fact that they are both poets living together, working in the same niche industry is also dealt with in this book; the competition, Patrick’s earlier success, their working styles and how they used each other for help and for motivation. So many parts of their life seemed tumultuous, but I’m impressed that two poets (!) could work and support each other for so long. Art can be a way for two people two connect, but I can easily see it forcing people apart when in a long-term relationship too.

Perhaps it was the presence of the cats that kept them together? They play a large role in this book, each acting as their own character that Lorna and Patrick were clearly smitten by. Lorna details Patrick’s love of the natural world; his care with the gardens, his desire to free trees from strangling vines in a forest across the road from their house, his insistence that spiders be removed from the house and set free rather than smashed under shoe. a His love and patience were obvious with the cats, in particular one who took months to warm up, quick to lash out and claw at everything. Lorna is careful not to treat the cats as humans in her writing, instead, both poets act with a sort of reverence around them: happy to feed and pet them, but never placing unfair human expectations on them – she never once refers to them as their ‘fur babies’, thankfully. It would be great if we could eliminate that phrase from our society’s vocabulary, but I digress…

It’s the long stays in hospital that seem to drain them both, and Lorna’s realization that she is so reliant on Patrick is one of the most painful things to read about in the entire book. I’m lucky enough to be married to a very handy man, so this particular quote struck me:

“Though I can reach the pot light in the kitchen ceiling with the stepladder, my fingers aren’t strong enough to turn the burned-out bulb and pull it out. If I twist too hard will I break it and cut my hands? I can’t even change a fucking lightbulb.”

Crozier’s writing can be blunt and self-deprecating, and of course painfully honest, which are all reasons why I love her, and this book. It’s a love letter to her life with Patrick, and it ends with her in bed, listening to the CBC announce Patrick’s death the night before. We don’t know how life after him will look, but we can hope it will contain future books, poems and stories that will continue to showcase her talents, and Patrick’s lasting influence.

What the Soul Doesn’t Want

Normally when a book has been on my shelf for over two years and it has remained unread, I give it away. But I’ve had a copy of Crozier’s poetry book What the Soul Doesn’t Want since 2017 because I never felt ready to give it up – I knew I would get to it someday because reading her words brings me so much joy. As I knew I would, I reveled in each page, savoring the lines and delighting at the observations of the natural world that she frequently writes about. In this collection one of my favourite poems is about animals fleeing a forest fire and taking up in a house for safety. I’ve developed a theory about why I love her poetry; she begins with a concrete thing, person, place, animal, etc. and then moves outward from it. Instead of writing about ‘feelings’, she roots her words into something tangible, and then from there, hits the reader with observations about the feelings it evokes. I like to know what the poet is talking about; it feels like Crozier and I are starting in the same place, and then she takes my hand and shows me what else can be imagined from where we came from.