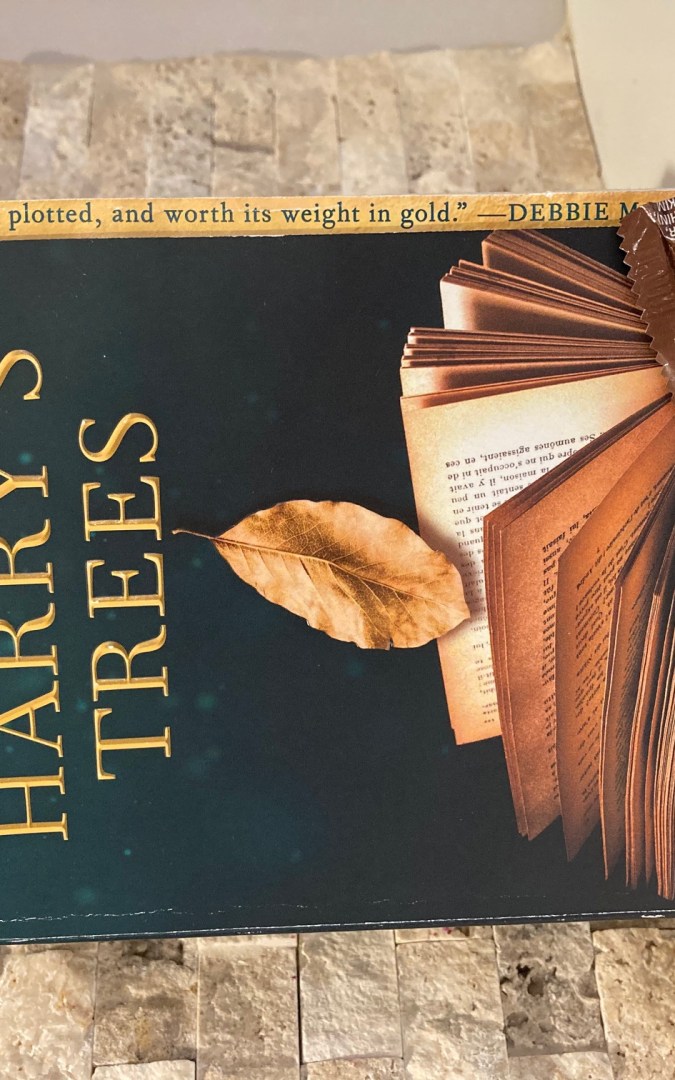 I rarely do this, but when my new boss handed me a book and said ‘you have to read this’ I quickly slotted Harry’s Trees by Jon Cohen into my reading queue. Why did I make an exception this time? Number one: she’s my new boss and I want to keep her happy because I’m deliriously relieved to even HAVE a job right now (the unemployment rate in Calgary is a staggering 11%). Number two: she’s a voracious reader like me, and she said this book was about stories and their power in our lives so…it didn’t seem like reading it would be a big chore. Turns out it was entertaining and quick, which is not surprising considering this is yet again, a Harlequin book. Yes, that Harlequin! It’s the Mira imprint from Harlequin, which means there was a delightful romance woven throughout. All the things to make you feel warm and fuzzy are included in this feel-good adult spin on a fairytale.

Harry Crane is in love with his wife and sick of his job at the US Forest Service, then she dies within a few pages of the book starting, and he blames himself for the strange accident she perishes in. A few pages later we meet Amanda, another person deeply in love with her husband Dean, and then…Dean dies too. Still reeling from the death of his wife and the news that he’s won 4 million dollars in a wrongful death suit sends Harry to the forest where he feels safest. There he comes across a beautiful treehouse that Dean made for his daughter Oriana, and sensing Harry is in desperate need of an emotional outlet, Amanda consents to having this new stranger live in this magical place behind their home. Despite the book starting with two major deaths, the fact that we never really know the people who die is a mercy to the reader, also allowing us the space to feel excitement for the inevitable romance between Harry and Amanda. Oriana is an avid reader and has convinced herself that her father’s spirit lives on in the forest, so she becomes obsessed with the idea of fairy tales and following their special ‘rules’ to find her father. This idea also appeals to Harry as he’s convinced he entered Oriana and Amanda’s life for a reason, so together him and Oriana hatch a plan to distribute his new (seemingly cursed) wealth.

This isn’t typically a book I would reach for as I don’t read a lot of contemporary women’s fiction, and when I see a blurb from Debbie Macomber I make dismissive unfair assumptions about what I’m going to find in between the covers. But when a fellow bookworm says I have to read a book, I believe them because they know the joys of tucking into a good story just like I do, especially when the book is about books. Is there anything more pleasing than having your existing worldviews validated in print? If my taste in parenting books is any indication, I can sheepishly admit I like nothing more than reading opinions that already coincide with my own.

This story is not magical realism, it’s firstly rooted in reality, but it does suggest that coincidences shouldn’t be ignored, and the influence of stories is one that we should take seriously. Harry’s brother Wolf convinces him to sue for this wrongful death suit, and when Harry wins and flees his old life in terror, Wolf hunts him down to get his share of the money. This extra element of a fairy tale, and the fact that Harry exchanges his bank balance into literal gold coins (while living in a tree house) adds this fantasy-like ambience to the entire story, so although the beginning is mired in sadness, the story gradually morphs into a light narrative that evokes an ‘anything is possible’ feeling. There are lots of moments where a suspension of disbelief is needed, but I was happy to go along with whatever the author had in store because I was enjoying the story.

I’m not used to reading a physical copy of a book that’s been read by someone else before me because most of my reading material comes straight from the publisher, but there were a bunch of turned-down pages in this copy, and each marked page held a wonderful little quote that describes the power of books. If you’re reading this you most likely share my love of the written word, so I’ll end this review with one of my favourite quotes from the book:

What else is a library, but a temple of truth? What other function do books have, the great ones, but to change the reader? Books to comfort. But most of all, books to disturb you forward (p. 302).