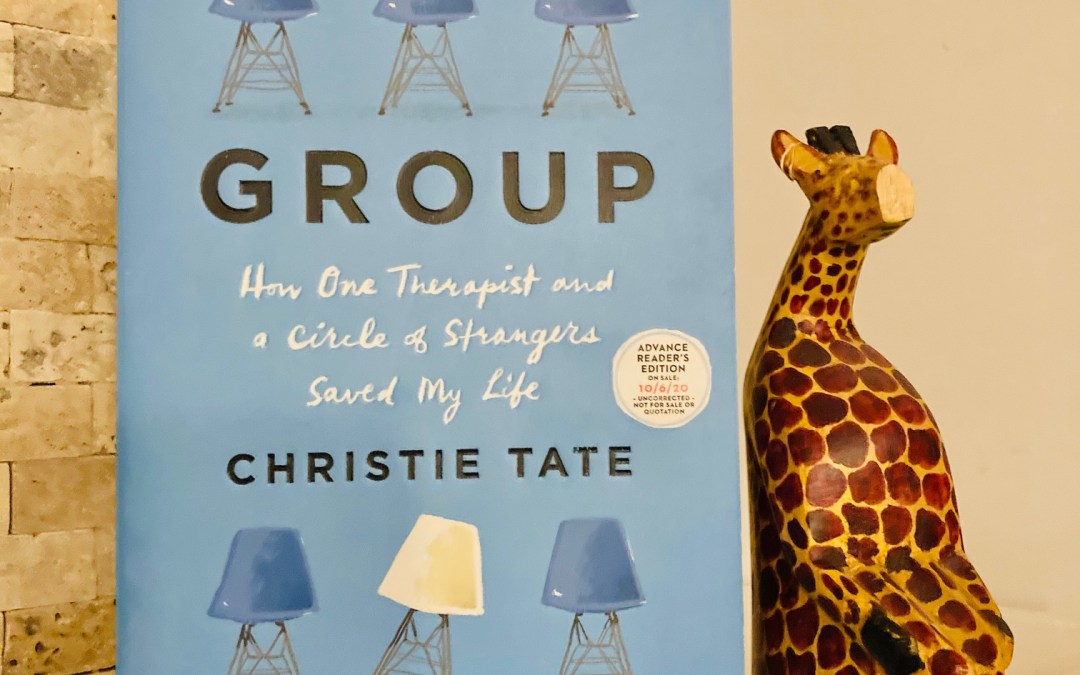 If you had the chance to secretly sit in on someone’s private therapy session, would you? Does hearing about the drama and disappointments of someone else’s life make you feel better about yours? I would personally answer ‘yes!’ to both those questions, but I may be in the minority. Group, How One Therapist and a Circle of Strangers Saved My Life by Christie Tate is banking on the fact that you’re like me and interested in other people’s problems. It’s a memoir written by a woman who joins a group therapy program where you essentially meet with the same group each week for years at a time, all talking about your problems in an open environment with each other. This understandably sounds like a nightmare to many but my gossip-loving self was dying to dive in. This book doesn’t hold much back, and that was my favourite part about it!

Christie is a classic high-achiever, and she’s just gradated from law school at the top of her class. She’s struggled with eating disorders in the past, but she’s now got that *mostly* under control. Despite these achievements, she finds herself fantasizing about her own death, and realizing this isn’t a healthy train of thought she starts seeing Dr. Rosen. As soon as she meets him, she’s struck with the realization that she has met him before at a 12-step recovery program for people with food addictions; strike one against him. He also harbours a painful insistence on complete and brutal honesty in his group therapy sessions which Tate struggles with, especially when her sex life is picked apart only minutes after meeting these people, many of them men. She sticks with this group, even adding a second one for many years, vacillating between both disgust and dependence on them and their infamous Dr. Rosen. A quick scan of her biography will tell you the book ends happily, but the ups and downs of her personal life detailed in this memoir are both shocking and scintillating to read about.

A fast pace, juicy details, and a positive message wrapped up in an entertaining journey, this book hit the mark for me. I love a good dish, so witnessing other people’s problems immediately appealed to me. And although I’m terrible at keeping secrets and boldly proclaim myself an ‘open book’ (no pun intended) to anyone who will listen, I can’t quite imagine myself in this author’s shoes; detailing the nitty gritty embarrassments of my life to a group full of strangers who offer both advice and condemnation equally. Opening up to a single therapist is one thing, telling a regular person with no medical or psychotherapy training is quite another. Clearly group therapy is not a fit for everyone, but as complicated as Tate’s life was, she did find it helpful, much to my shock. And her problems were not minor; her suicidal thoughts were steeped in serious commitment issues, and she was desperate to find a man to call her husband so every new relationships she entered was picked apart by her group members . I cringed when she had to discuss her sex life with the other middle-aged men in her group, but at the same time the simultaneous input from women both of her and age and older was probably helpful in the long run. Her forced confessions shifted both her and the reader’s thinking, so it turns out Dr. Rosen’s methods are useful on many levels.

Going to therapy has become extremely common place, and I’ve only ever done it once or twice, but I’ll always consider going again, because what’s the harm? Paying someone to listen to you talk is never a bad thing, and at the very least, it will spare your significant other from hearing you prattle on about things. For many people, therapy is not an option but a lifeline, and although Tate falls into Dr. Rosen’s groups haphazardly, her problems are ones that needed help, right away. It surprised me that she became so dependent on these sessions, but her life before them was also dependent on her meetings with her recovery program, so this kind of mutual unburdening and socializing is clearly her ultimate source of healing. This book showed me how easy it is to judge others, but how harmful it can be judge oneself, and sometimes the easiest way to break through this form of self-harm is to simply talk to someone else about it. Compared to other ‘self-help’ books, this one points out that we already have the tools to heal ourselves: communication! Whether it be with one other person or a whole other group, changing the narrative is our best path forward.