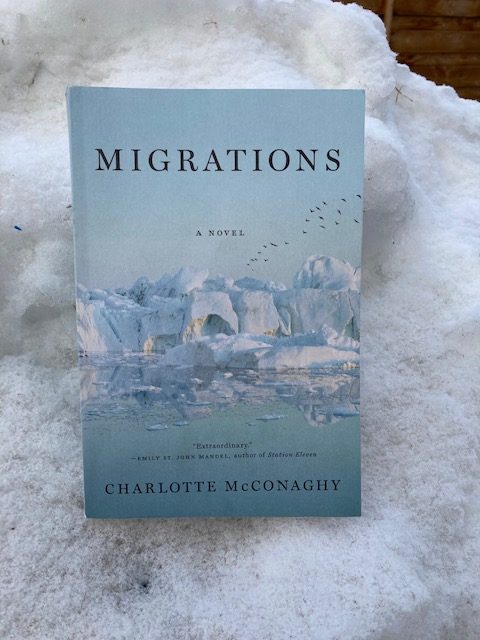 A new genre is emerging in books, and it’s called ‘climate fiction’. Typically dystopian (because how could it NOT be?) it describes a future in which the environmental impacts of global warming are no longer escapable by anyone, and life as we now it know has been drastically altered because of the selfish acts of humans that came before. These kinds of books are not for the anxious, because many can’t handle another reminder of how screwed our future generations are, yet the environmental degradations are rarely the sole focus of these books. Instead they depict the problems we deal with now, set against the backdrop of a flaming dumpster fire of inevitable extinction. Migrations by Charlotte McConaghy takes place in an all-too believable future, but the lessons the characters learn are timeless, and her plot is one that allows us readers to experience the joy of nature no matter where we find it.

Franny Stone had a difficult childhood, and finds solace by swimming in the ocean, even in the winter. We meet her as an adult in Greenland tracking the Arctic tern, one of the last remaining birds in the world. It’s unclear what time period this book is supposed to take place in, because everything seems set in the present, except for the fact that wild animals have all gone extinct, and only a few species remain alive in captivity. She convinces a crew on a fishing boat to let her aboard and change their course to follow the Terns south, as they migrate to the Antarctic each year. By pointing out that the Terns will find the few schools of fish remaining in the ocean, the sailors reluctantly agree to Franny’s request. As the journey continues we are introduced to the eclectic group who barely eek out a living as fish slowly disappear, but we also learn some disturbing things about Franny herself, including her stint in prison and her dangerous sleepwalking habit, clearly not conducive to being on a ship. Various flashbacks slowly bring her tumultuous life into focus, but we also learn in the first few pages of the book that Franny plans on killing herself once she reaches the Antarctic, so despite the plot focusing backwards the majority of the time, the suspense still builds as the ship moves south.

Although we meet Franny when she is still quite young (in her mid 30s) she’s lived a multitude of lives by the time we catch up with her in Greenland. Forcing her way onto a fishing boat for a journey that seems unlikely to succeed is just another ill-advised step in her life of contradictions. She loves nature, and is essentially friendless when she meets a young professor, Ennis, who after one date, she ends up marrying in a hasty beachfront ceremony. She spends years of her life trying to track down a mother who disappeared when Franny was young, and once again, this does not end well for her. Still, her hope that clings to these strange birds keeps the plot driving forward despite all the tragedy she leaves behind, but she remains a mystery to her husband, her new fishing crew, and most of all the reader. One would think this book is focused on the environment, the external factors swirling around Franny’s complicated situation; instead, the story is almost completely insular, relying on Franny’s restlessness to shape the narrative. Her strength is a beacon of positivity in this otherwise dark novel, and I found myself cheering for her, even when her inability to connect with others drove everyone else away. In many ways she is a woman in denial, but like her husband’s unrelenting love for her, her deeply flawed character only made me like her more.

Speaking of contradictions, one of the most fascinating for me to read about was Franny’s issue with the fisherman in general. At this point in their world, oceans have been so overfished that wild schools are difficult to come by, so simply being a fisherman is seen as a dangerous and callous thing to do, akin to working in a coal mine or burning plastic in open air these days. Franny is adamantly against fishing, and feels sickened at the site of fish being caught in a net, yet she relies on this boat and these people to get her to her goal, and she comes to better understand their drive to participate in this increasingly challenging career. Being from Alberta, the land of oil and gas, the idea of these competing interests really struck home for me. There is a similar push/pull going on here right now; how can we criticize people who have made their living extracting natural resources when it’s all they’ve ever known, and it’s their only money-making skill? Yes, we now know that burning fossil fuels contributes to global warming, but how do we transition these skills into an environmentally-friendly occupation that serves to bolster a population, rather than shame them? I suspect these questions will become increase in urgency as our planet looks to transition to greener pursuits.

I really loved this book, and highly recommend it to just about anyone. It’s an impressive mix of standout characterization, plot wizardry and gorgeous natural settings that will draw in many kinds of readers, and discovering a debut author with this kind of skill so early in her career is a find worth celebrating.