Book Review: The Best of Me by David Sedaris 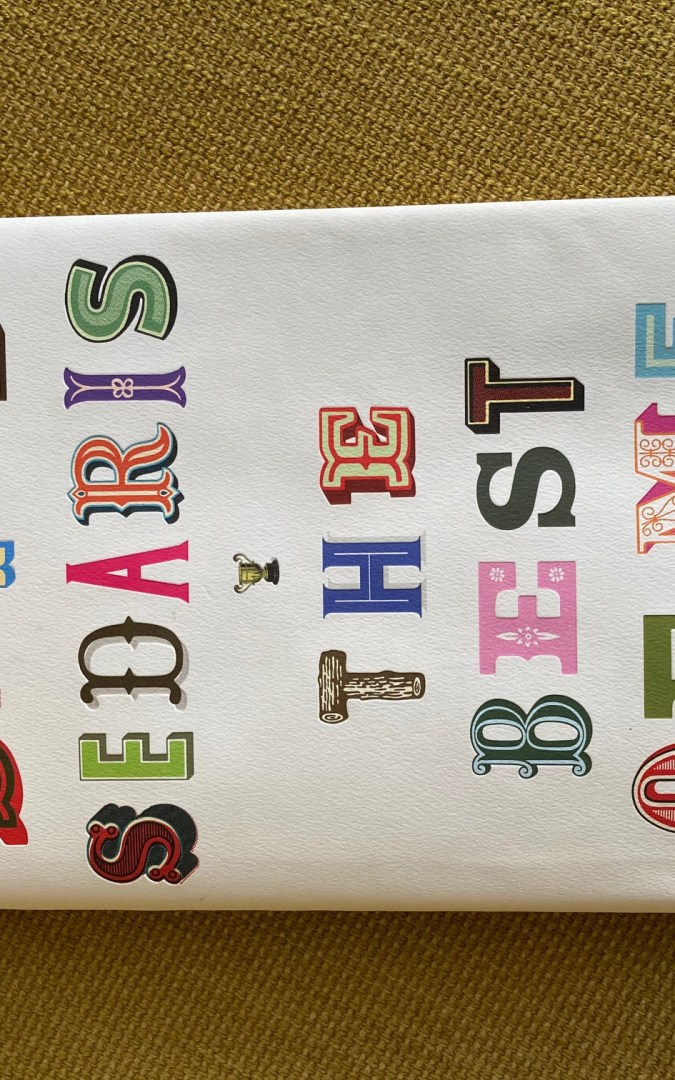 Is there any greater pleasure than reading a book by your favourite author? Probably, but whenever a David Sedaris book is released, even one that’s only a selection of previously-released stories, I celebrate! He is my favourite author, and it’s my goal to one day see him read live. The Best of Me still held new treasures for me to read, because I haven’t read all his books yet. I want to savour all his stories, so knowing there are still a few books of his out there that I have yet to enjoy is a satisfying way of delaying pleasure, sort of like stashing a really nice chocolate bar in the back of your pantry to delight in later.

Sedaris writes about the world around him, whether it be his quirky family and their unbelievable history, his long-suffering partner Hugh, imaginary letters that he makes up, or even mundane encounters while travelling. In “Girl Crazy”, fictional letters are written to the producers at ABC network when it was announced the Ellen Degeneres would come out as gay in her popular sitcom. “Glen’s Homophobia Newsletter Vol. 3, No. 2” is another hilarious fictional take on one man who deems everything homophobic, even when manipulating others into unfair situations. Along with these fictional tales are just as many personal essays (if perhaps a little embellished), including assorted tales of vacationing with his family, seeing a dentist in Paris, waiting in line at an airport and judging the people around him, and reminiscing on a terrible babysitter him and his siblings were left with when they were young. “Six to Eight Black Men” is based on a conversation he has with someone in the Netherlands, who informs Sedaris of their quirky Christmas traditions, then spirals into commentary of the ridiculous and absurd gun laws that various American states hold. Sedaris muses on the fact that in Michigan, people who are legally blind are still allowed to hunt with a gun:

He doesn’t take himself seriously, and he doesn’t want the reader to take him too seriously either, which is what makes this book so fun.

His stories are ripe for reading aloud, which I took great pleasure in while on a romantic getaway with my husband. Often, I would be giggling so hard it was difficult for me to get the words out, which would then get my husband giggling, until we both roared with laughter at what I was reading. My husband isn’t a book lover like me, so the fact that he enjoyed these stories so much is a sure sign of how wonderful the the writing it. Although Sedaris’s collections of stories are meant as entertainment first and foremost, there’s enough seriousness to the points he’s trying to make that keep me interested. It’s not all funny because Sedaris has experienced some difficult things in his life, including the suicide of one of his sisters Tiffany, which he has written about often. In a particularly poignant moment, David’s father muses on Tiffany’s death:

Is that not a brilliant line? It struck me as such as visceral metaphor, my mouth probably hung wide open after reading it. But this is why I find his stories so inspiring too; he’s experienced trauma in his life, yet he pushes through it, determined to find the humour wherever he can, which in his case, seems to be just about everywhere.

While it seems counterintuitive for me to call David Sedaris relatable (he’s a man, he’s gay, he’s decades older than I am, he’s incredibly rich and famous), his inner thoughts are just that. As he describes his aging father in the quote below, I’m 100% positive that both my brothers and I have thought the same thing about our own father:

“He was standing beside the sofa, wearing a shirt I clearly remember throwing into his trash can in the summer of 1990, and enjoying a glass of vodka with a little water in it” (p. 343).

Just replace ‘vodka’ with ‘boxed wine’ and that would be my Dad (and I know he’s reading this!).The best part about this quote is that his father isn’t even the topic of the story, or the paragraph, it’s just the way Sedaris writes: quirky observations dropped in with fantastic comedic timing.

Everyone needs a laugh right now, and I promise you this book will deliver. Why not take a page out of my book (sorry) and read some stories aloud to the fellow adults in your life? You can easily do it virtually, and sharing a chuckle is a meaningful way to connect with your loved ones.