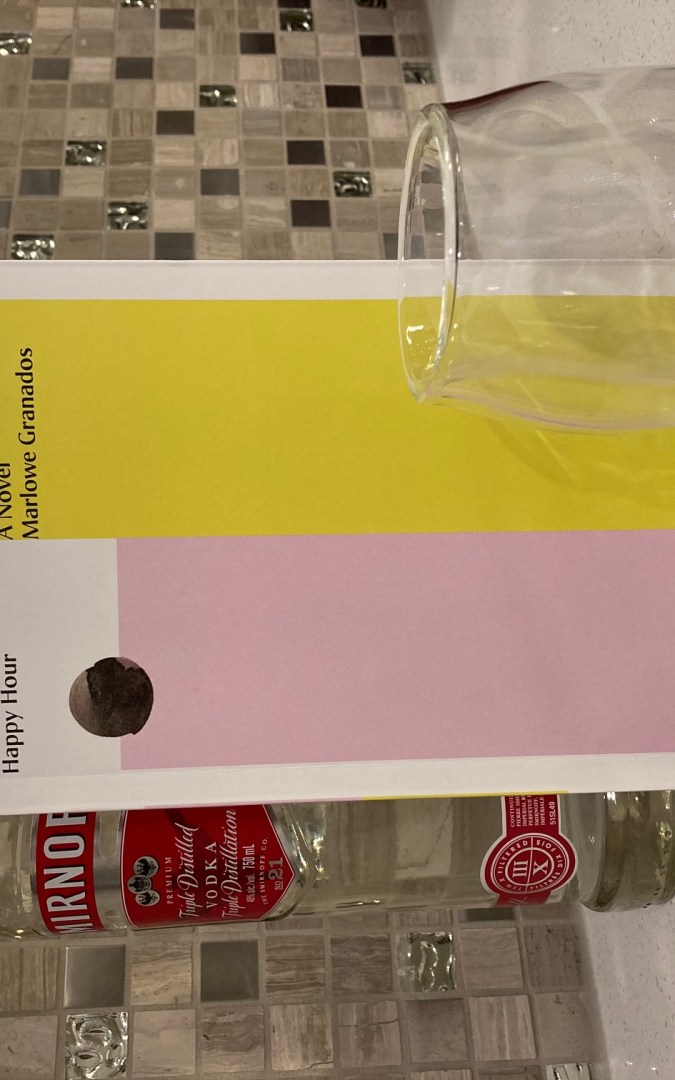 Have you ever had the experience of reading a book, looking at a piece of art, or even watching a movie and feeling like you are much ‘cooler/hip’ for having taken it in? After reading Happy Hour by Marlowe Granados, I feel as though I’m on the cutting edge of something, but I’m not cool enough to know what exactly. It’s published by a brand-new publisher called Flying Books, which is also a book store, writing school, and general beacon of hope for those of us in the Canadian publishing industry. I don’t entirely understand their business model but gosh darn it, I’m excited for them nonetheless. And if they keep printing books as fabulous as Happy Hour they certainly have a bright future.

Isa is 21 and has moved to New York City for the summer with her best friend Gala, and because they aren’t there legally, they are selling clothes at various markets to make ends meet. Staying with a friend of friend, they are paying a lot of money to share one bed, but making the rent each month continues to be a burden, so they do things that young pretty girls are invited to do to make extra money; act as extras in movies, model for artists while they paint, they even befriend a bar owner who pays them a cut of each bottle service they encourage their friends to buy. They aren’t concerned about their future, rather, simply having enough money to pay for that night’s taxi trip, or the ability to indulge in a round of oysters at their next meal out. We follow them through four months of sweltering heat, uncomfortable adventures, and numerous happy hours that will simultaneously make you feel exhilarated and old.

We only get Isa’s first person perspective in this book, but her voice is an entertaining mix of humour, insightful descriptions, and bold statements on what she’s learned about life by travelling the world in this casual, somewhat dangerous way. She has a seductive way of talking that draws people to her; a penchant for seeming carefree but also serious and witty, so she finds herself in situations that many of us could only dream of. For one weekend we follow her to a huge house in the Hamptons, owned by a financier friend of hers from Europe. She also catches the heart of a wealthy entrepreneur who sends a designer dress to her little apartment the morning after they meet. At one point, a famous male celebrity falls in love with her after spending only a few hours together, and yet, she takes this all in stride, not overly excited or giddy, or even anxious, it’s just the life she leads. Sometimes she finds herself lugging a huge suitcase down the street because she can’t afford a cab, and sometimes she’s sipping champagne in an ultra-exclusive club with elites, it’s just the life she’s chosen for now. Her lack of planning gave me anxiety as I read about her summer, but I also admired her choice to truly live in the moment and focus on enjoyment first. I could never be that person, even if I tried, so instead I lived vicariously through this novel, grateful for the solid grounding of my own life but a little bit wistful for my youth and the days I could bar hop with friends.

Some men accuse Isa and Gala of being ‘good time girls’, especially when they sit down for drinks with them, then run away once they realize how terrible the men are. Even thought their actions may seem silly or shallow, Isa’s musings are thoughtful and occasionally profound. While her rooming situation and prospects at an eventual career at shaky at best, her self awareness and self respect is anything but. She frequently comes across as older than her years, perhaps earning this badge of honour through forced independence at a young age. She displays a breezy sense of humour in a David Sedaris-esque way: “People love Paris, but they forget it smells like a urinal. Being there is like paying someone to be rude to you and deciding to like it ” (p. 110). But she also has an eagle eye for inequities that she always points out: “When men are in the kitchen, it is considered work, and when women are in the kitchen, it’s considered duty” (p. 197). Her best lines are said internally, so we don’t get to witness other people’s reactions to them; it’s a private joke shared between her diary and us readers.

Many people have compared this to a poorer version of Sex in the City, and while it is about women in New York City, Isa and Gala are much too realistic to be lumped in with that television show. Although I couldn’t relate to Isa, I respected her, and still think of her carefree living as something to aspire to.