Book Review: To Tell You the Truth by Gilly Macmillan 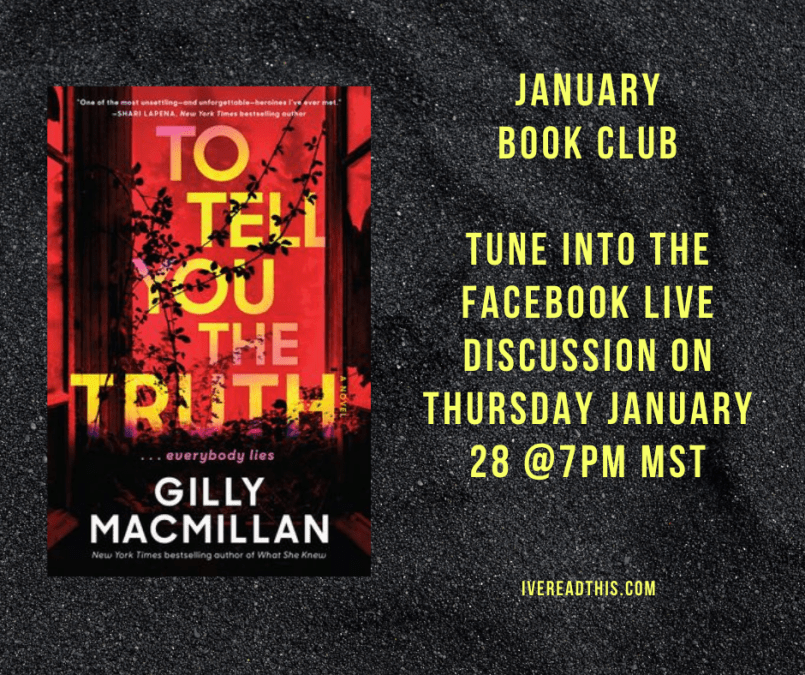 It’s officially the end of my online book club, because now that I’m increasing my day-job hours, I just don’t have time to run this group on my own time. Still, I’m ending it on a high note with Gilly Macmillan, a queen of thrillers that never disappoints. Her latest book To Tell You the Truth is written from the perspective of a bestselling female thriller writer who lives in the UK and releases about a book a year. I don’t know much about Gillian’s personal life so the similarities most likely like end there, but the fact that Gillian has created a situation that mirrors her own life is constantly floating in the back of the reader’s mind as the plot thickens. It seems incredibly brave, especially because the author’s sanity is constantly coming into question…

Lucy Harper is a famous and wealthy thriller writer with a handsome husband named Dan; he also acts as her cook, accountant, and friend. Because she’s contracted to release a book a year, she has little time for managing her own life, so Dan steps in to do this for her, happy to spend her money in return. He surprises her by purchasing a mansion near her childhood home, then goes missing shortly afterwards, his car found burned out and no sign of a body. Not surprisingly, Lucy is considered a prime suspect and treated to frequent visits by police. They have much to uncover about her, including the fact that her young brother went missing when they were just kids, and even back then Lucy was a suspect. She’s changed her name but her past is returning to haunt her, especially now that she lives so close to it. To make matters worse, Dan’s reputation is also in tarnishes, as Lucy discovers he was busy with more than just her errands while she was locked away writing her latest bestseller. And if suspicion wasn’t already mounting high enough, Lucy seems to have a strange habit of talking to a woman named “Eliza”, who isn’t real, but the beloved protagonist of her bestselling books. But does having an imaginary friend as an adult mean you’re capable for murdering someone? Lots of people seem to think so…

Thriller readers will no doubt recognize the unreliable narrator trope that Macmillan is taking advantage of here; it’s a common tactic to build suspicion and twists into a plotline, and it’s being used more and more these days. Still, Macmillan has been writing long enough that she doesn’t rely on it completely, and the narration is complicated enough with lots of other red herrings to keep any mystery-lover satisfied. Lucy is the kind of woman that frustrates female readers because she caves easily to Dan’s demands and manipulations, too often falling into the ‘helpless woman’ stereotype, even though she’s the one making all the money. Still, the demons she finds in both her past and present ensured her character became more than a singular overbearing fault, so I didn’t mind seeing things through the perspective of such a deeply flawed personality. As the pages turn, we realize Lucy challenges the different labels placed upon her, which kept me invested as a reader.

There are two different mysteries in this novel; first is figuring out what happened to Dan and is he still alive? The second, and in my mind, more horrific (because Dan was an ass anyway and I wasn’t too disappointed with his disappearance) was what happened to Teddy. The parent in me kept hoping that Lucy would finally discover what happened to him while her new house was so close to the woods he disappeared in all those years ago. Plus, I assumed Teddy and Dan’s disappearance was connected, because how coincidental that two very important people in one person’s life could go missing for completely different reasons? Well my lack of imagination is clearly the reason why I’m not a writer myself, because the ending to this book completely blew me away, I did not see it coming, and quite frankly, no one would. A quick perusal of goodreads reviews will reiterate my level of shock. Other readers complained about this book’s believability, the ending, Lucy’s actions, her neighbors reactions to her, etc. And while I agree not everything makes complete sense, it’s a well-planned plot, the pacing is even and I was engaged throughout, so what else can you really ask for in a thriller? Especially in an over-saturated market such as this one? I know my fellow bloggers will have an opinion on this, so please leave your comments below!

Everyone has secrets in this book, and we don’t always learn the reason why some remain hidden, while others explode into the open when we least expect it. One thing you can be sure of, is that this story is full of nasty people with vicious motives, and there’s less than a handful of characters that you’d want to know in real life because everyone displays various levels of selfishness. Still, it’s a fun look into the complicated life of an author, and I’ve always been a sucker for a juicy tale of publishing woe.