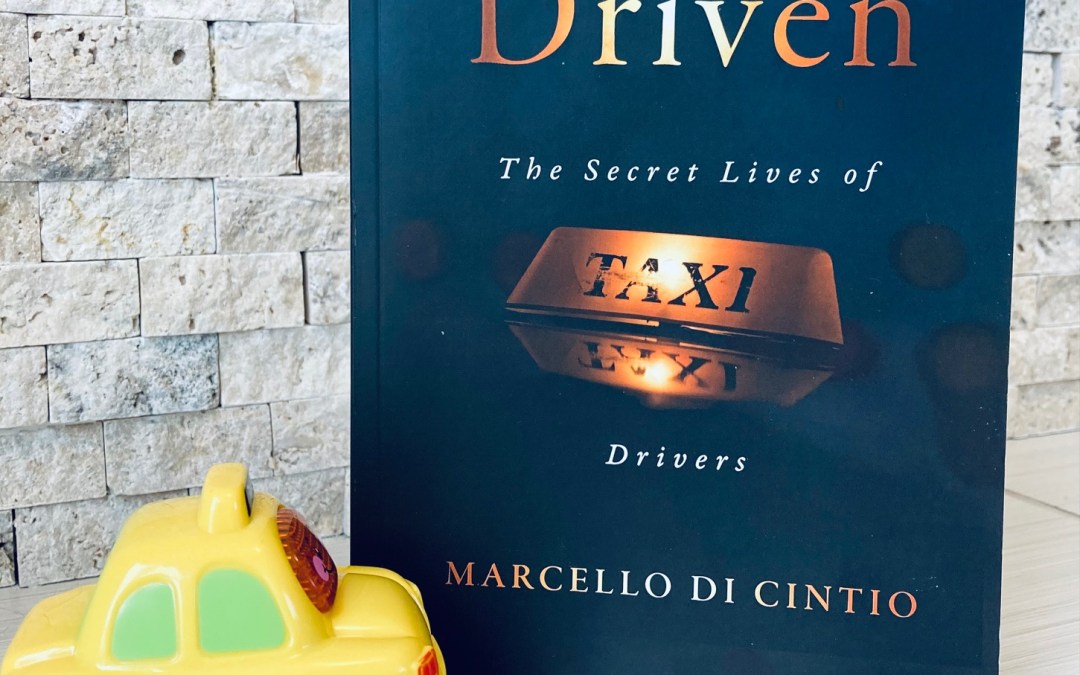 How long has it been since you’ve been in a taxi? Personally, it’s been years because I tend to take Ubers, but after reading this book, I may seek out taxis more often. Driven: The Secret Lives of Taxi Drivers by Marcello Di Cintio is a look into the lives of taxi drivers across Canada, each chapter detailing a new driver, and a fascinating life story behind them. As I usually do, I’d like disclose the fact that I know fellow Calgarian Marcello Di Cintio, I typically see him at literary events (back when they were in person) and he’s got a wicked sense of humour, but rest assured that if I didn’t like this book, I simply wouldn’t review it. I’m actually quite surprised at how much I did enjoy this, I’ll admit I wasn’t all that excited to pick it up because I don’t read a lot of non-fiction to begin with, but as soon as I dove in and met our first cabbie, I was hooked.

Before the pandemic, Di Cintio spent time crossing Canada in search of interesting cab drivers. Many weren’t willing to talk (surprisingly, cab drivers in Winnipeg were particularly close-mouthed), while many wouldn’t stop talking once they started. In his introduction Di Cintio admits that he never had a particular affinity for cab drivers, in fact, he’s almost gotten into a fight with one. But once he began asking question and interviewing them outside of their car (typically in a Tim Hortons), he heard stories that would both shock and sadden him, as well as his readers. Moving past the well-known ‘doctor from another country driving cab in North America’ story, he meets taxi drivers who escaped various wars and even one arranged marriage. He also meets a group of women known as “Ikwe”, a female volunteer organization dedicated to driving Indigenous women around Winnipeg, the city known for its racism towards Aboriginals. Alongside Di Cintio we discover the magic behind these people and their stories, painting a picture of the often turbulent lives of these blue collar workers that are so often forgotten by society.

In my mind, there is nothing better than a book of personal stories skillfully told. I have no doubt that there were many people that simply didn’t make the cut in this book because every single cabbie we meet is so engaging. The selection and editing process to arrive at this group is reason enough to read Driven because I promise you won’t be disappointed.

Di Cintio’s journalism skills are clearly evident in the rich descriptions and conversations he relays in these pages, but what makes his writing even better are the small asides he offers us when making personal observations about people, or poking fun at himself. He is simply honest when describing these people that he is interviewing. One cab driver in particular, nicknamed “The Bully of Baghdad” adores his expensive BMW and makes a living ferrying around rich people and doing them favours. It’s obvious that this man is a bit obnoxious, parking wherever he likes and generally coming off as a braggart, but Di Cintio cares so much about his subjects we get a peek behind the bravado to truly understand what ignites this particular man and his dreams. Another memorable chapter is about a cab driving couple who spend a lot of their time together:

I asked Jass if she and Amrit ever tired of each other during those grueling workdays. They worked side-by-side for years. She barely understood my question, which perhaps revealed more about my relationship with my now-ex-wife than about her and Amrit’s marriage. ‘My husband is very family,’ she said. ‘He is always around us. He is a very good person. A very nice gentleman.’ (p. 78 of ARC).

I laughed out loud when I read this! I love people who don’t take themselves too seriously, and it’s obvious that in doing the research for this book, Di Cintio was humbled by the hard work and ingenuity of these drivers. I was too. He points out that driving cab is a physically demanding job, it’s hard on the body, and drivers are often expected to work extremely long hours and eat unhealthy fast food while on shift. But he’s also very straightforward when he’s uncomfortable or in disagreement with some of the opinions that are expressed during his interviews. One cab driver, who escaped the Nazis himself, compares what Uber is doing to the taxi industry as another holocaust. “Yikes” is not a strong enough word for how inappropriate this comparison is, and obviously Di Cintio experienced the same discomfort when he heard this. Still, the charm of this book lies in the vast array of the opinions these drivers possess.

What’s wonderful about a book like this is that it would appeal to a wide swath of readers. It may seem like a niche topic (as it did for me) but once I gave it a chance, I was happily engaged from beginning to end so I’m excited to recommend it to others too.