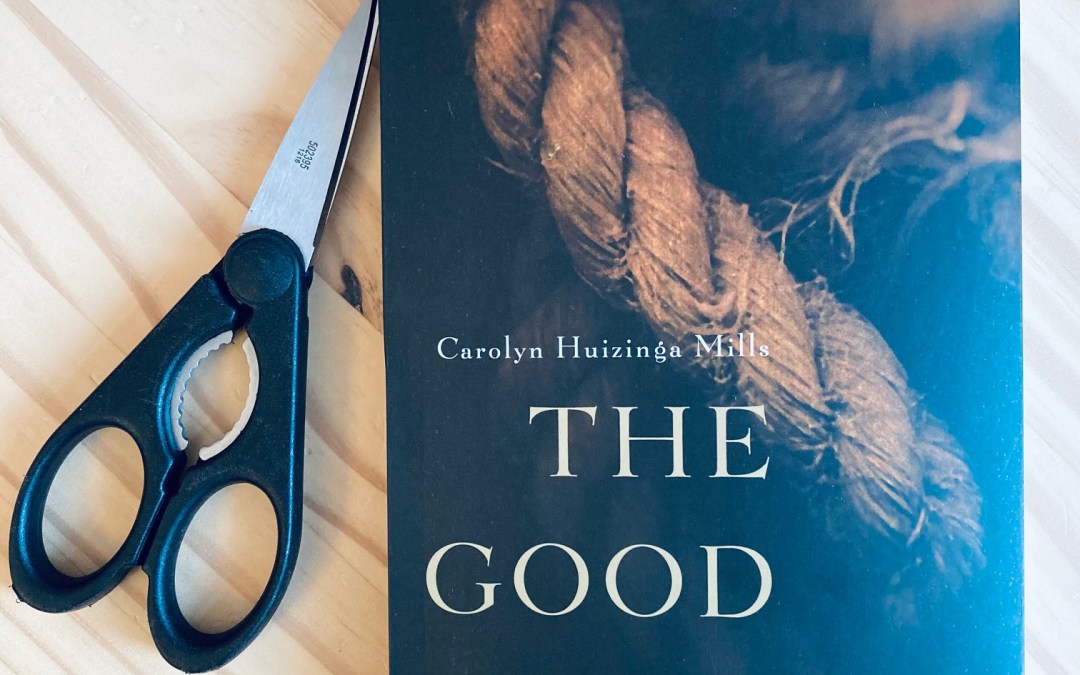 This book surprised me. Based on its cover, and its publisher (Cormorant Books), I was expecting a very literary novel, something with drawn out descriptions and hidden meanings, usually a bit slower in pace. Instead, I found a page-turner of a novel in The Good Son by Carolyn Huizinga Mills, something I raced to finish, excited to see if my theory was true or not. I may have found this book more entertaining that I originally expected, but the majority of it still takes place in the interior of one person’s mind, so it’s not as plot-driven as other psychological thrillers currently overtaking bookstore shelves.

Zoe grew up, and still lives in a small town in southern Ontario. Her father died when she was very young, so it has been her, her mother, and her older brother Ricky for as long as she can remember. When she’s still a child, her next-door neighbor Amy is murdered when she is only six years old, and this tragedy haunts Zoe, shaping her life in innumerable ways. It’s not just the memory and shock of what happened that concerns Zoe, it’s her belief that Ricky was involved in the murder that stuns her into secrecy, keeping that suspicion to herself even as it eats away at her conscience over decades. The book’s narrative jumps between Zoe’s childhood and adulthood, demonstrating all the painful ways she is affected by this event. But when the case of Amy’s death is re-opened as Zoe enters her thirties, the pressure to tell someone about her secret grows, aggravated by other issues coming to light with this dreaded news. Not entirely shocking but exciting nonetheless, I was surprised by the ending, which made reading through the grind of Zoe’s internal debates entirely worth it.

This book is a very intense study of one person; her habits, her inner thoughts, her personal development (or lack thereof), and the stories that she tells herself. Mills doesn’t make anything obvious to the reader, it’s not clear to us how balanced of a perspective Zoe has. There are times when we are led into doubting her, but there are other situations when her reasoning is substantiated by an external character, so I wasn’t convinced she was an unreliable narrator at any specific points in the story; we simply viewed everything through her particular lens. Her circular thinking and undeniable anxiety was strangely relatable, because haven’t we all thought the worst of someone in our lives before, but then hated ourselves for even entertaining that idea? Zoe’s roundabout reasoning may irritate some readers, but I was fascinated by the mental gymnastics she frequently performed, and the story was drawn out enough to keep me interested in finding out who Amy’s murderer really was.

Even more important than the story of what happened to poor little Amy is the story Zoe tells herself each and every day. Her self-worth is completely tied up in the role she played as a young girl: always trying to please her mother to counteract the bad behaviour of her brother Ricky. And once she assumes the story she tells herself about Ricky is true, it colours the way all their future interactions play out. There’s no question he’s an asshole, but a murderer? As he works his way through three different wives, having a daughter with one of them, it’s shocking how disgusted Zoe is by his actions, and although we never feel sympathy for Ricky, I wavered between suspicion, confusion and sympathy for Zoe.

I also questioned why Zoe’s insistence on being the perfect daughter for her mother had such a strong, long-lasting hold on her. At one point in the story, she describes travelling to her mother’s house twice a day during snow storms to shovel her sidewalks, and because the majority of Zoe’s life is simply spent working or being at home alone, this act of shoveling is something she looks forward to – is that not one of the saddest things you have ever heard? There is a sense of mourning that pervades the whole novel; the lack of love between brother and sister, the ever-present sadness of Amy’s death, and the lost opportunities for adventure and happiness in Zoe’s youth and early adulthood.

It’s difficult to review this book for a general audience because I think some readers (like me) will love it, while others may hate it. Still, for those who want a deep dive into the psyche of someone who suffers from extreme guilt (and who doesn’t?) this is definitely a book to try out.