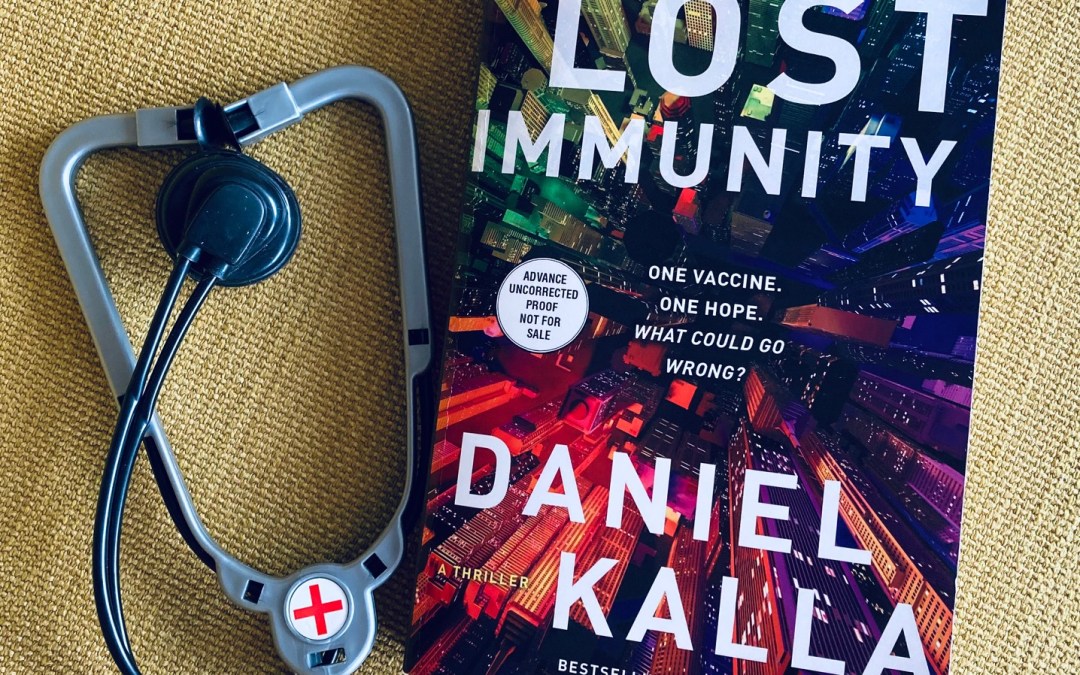 Last year I read Daniel Kalla’s book The Last High for my (now dormant) online book club, and although medical thrillers aren’t usually a strong interest of mine, I found I really enjoyed its story about the opioid crisis. Kalla is back with another timely novel: Lost Immunity. Set in post-covid Seattle and all about the anti-vax movement, this book has all the elements of a thriller that will excite some, and terrify others. As I write this, I am at the two week mark after my second Covid vaccine, so I’m enjoying a small sense of relief. Still, this book is about a fictitious strain of Meningitis that is deadly for children, so even though Covid may seem like it’s in my rearview mirror for the moment, the idea that another scary virus could be right around the corner is an entirely believable premise for a suspense novel.

Lisa Dyer is Seattle’s new chief public health officer (i.e. Dr. Deena Hinshaw or Dr. Bonnie Henry for those in Western Canada) and she’s in the difficult position of managing a new, deadly Meningitis outbreak stemming from a bible camp. This virus is particularly dangerous for children and teenagers, some getting sick and dying within hours of showing symptoms. Luckily a new vaccine that fights this particular strain has just finished its final phase trials and Lisa has convinced the pharmaceutical company to release it to the city of Seattle in hopes it will prevent more deaths. The reasoning is that potential new side affects will pale in comparison to death, but a strange and deadly reaction rears its head only days after starting the vaccine clinics. The pharma company is puzzled because nothing even remotely related to these new side effects showed up in the trials, and now people who were vaccine hesitant or anti-vaccine are triumphantly pointing to the hastiness of the rollout as the true danger. Short anonymous chapters suggest that the vaccines may be tampered with, but it’s all a mystery that doesn’t get solved until the very end. The lead up to the resolution is a suspenseful one because so many lives are at stake, which really pushes the reader through the last few chapters.

I’m lucky that I haven’t come across many people who have openly criticized vaccines in front of me, and quite frankly, I’m not sure how I would respond if they did. As a doctor himself, Kalla is clearly on the side of pro-vaccinations, but he does an admirable job showing the other side through his anti-vax character Max. Max’s son Jack is Autistic and he blames the MMR vaccine Jack received as a child for his condition. But Max is also an intelligent naturopath who avoids radicalism, and he references medical studies as justification for his views. His efforts to spread the word about the danger of vaccines stems from his desire to help other families prevent what happened to his, so it’s hard not to dislike the man when he has such good intentions (as misdirected as they are). Although the majority of the characters are doctors and scientists, so in most cases pro-vaccine, there are a few vaccine hesitant characters that are reasoned with and their mind is changed, so Kalla does believe his books and writing may help to combat misinformation (He confirms this hope in his author’s note at the end). No one likes a book that preaches, but Kalla avoids this by weaving a variety of opinions and situations into the plot.

As in his last book, he includes one to two page chapters that introduce a character on the verge of death or hospitalization. We only meet these characters once, but the introduction helps to push the action along and personalize the tragedy all at the same time. In this book’s case, the victims are all children, so I saw it as an extra mercy that we never became too invested in a character that was killed off by the virus. The development of Lisa’s character was especially strong, and although we don’t get a lot of interior dialogue, we understand her motivations and why she is plagued with self doubt. I’ve found myself wondering how the public health officers across the world are doing; can you imagine having that kind of job, that kind of pressure on you for the past year and a half? Some have been dubbed heroes, while others have been dubbed villains, depending on people’s opinions of the restrictions and its affect on their lives. The inner workings of these positions is fascinating to read about, and on the whole it made me so much more empathetic towards health care workers – which I was before, but this brought my appreciation to a whole new level!

In summary, if you’re still a bit nervous about Covid (and that’s ok if you are!), probably best to pass on this one until the word ‘pandemic’ is a distant memory. But, if you’re looking for a novel to tear through while on vacation, I highly recommend it.