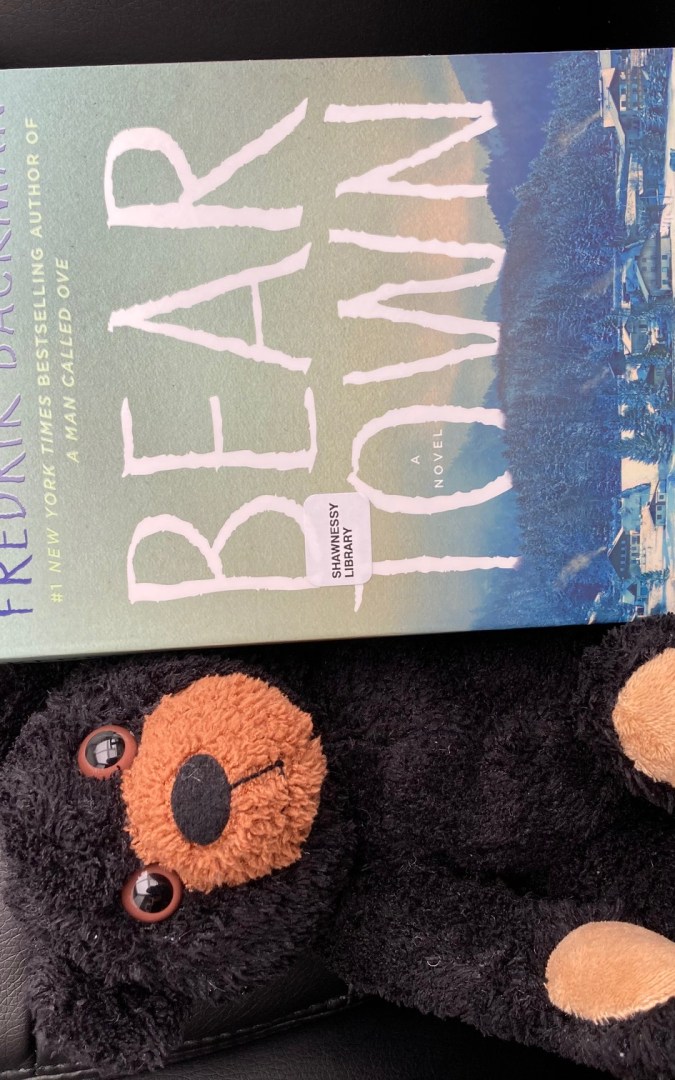 Beartown by Fredrik Backman is another book I picked up at my local library (curbside that is, apparently Calgary has the highest COVID numbers in the North America at the moment so libraries aren’t open right now). I’ve wanted to read it for awhile since I discovered how much I enjoyed Backman’s writing when I reviewed Anxious People last year, which still proves to be one of the most popular reviews on this blog! Based on Anxious People, I assumed this book would be similar, and the writing was, but the tone of Beartown is significantly darker. Still, it’s an equally impressive book, and I loved the characters which is where Backman truly shines.

Beartown is a small hockey town in the far north, so it snows 9-10 months of the year there. If you don’t play hockey, you watch it, so its modest population is obsessed with their junior boys hockey teams and their local standings. The teams haven’t been doing well lately, and the town itself is slowly shrinking; the factory is downsizing and people are moving away from lack of jobs. But there are a few promising young men whose talents seem to be a lifeline for Beartown, and if they can reach the finals, there’s a chance a hockey academy will be built there, which will then bring back industry and retail, etc. We meet and follow the town’s hockey star, his best friend who has a deep secret, the boy from the wrong side of the town but incredibly fast on skates, the enigmatic daughter of the hockey club’s general manager, and various other characters who all contribute to the main conflict that drives the plot. Things progress in a fairly positive way at the beginning of the book (that is, if you can ignore the fact that all the adults are putting far too much pressure on these young hockey players), but things take a dark and unexpected turn when a young woman accuses the hockey team’s star of raping her at a party. People take this news much as you would expect in a town like this; they become divided, and blame the victim more often than not. Still, Backman’s portrayal of each character and how they react to this news is the meat of the plot, and drove me through the 400 pages of this book quicker than I’d ever imagine myself reading a book about hockey.

People had warned me Beartown was dark, but it wasn’t until I started reading it that I realized this darkness permeates the entire story. In a literal sense, the town itself is in darkness more often than not because of its geographic location; the days are short and the sun doesn’t shine for long, especially in the winter. And hockey is a sport that is associated with early mornings, and the majority of the characters wake up extremely early to get to the rink as soon as possible. The thought of dragging either of my kids anywhere for a 5am practice is enough to strike terror into my heart, so I’m secretly hoping they will remain as unathletic as their parents. I couldn’t help but be suspicious of everyone’s obsession with hockey and these kids’ performances, that’s what I found the darkest of all. Backman doesn’t frame all of these obsessions as unhealthy, and he does show us through other characters that people care about hockey because they ultimately care about their town and neighbors but…I was still uncomfortable. I just couldn’t relate to an obsession over sports, and more importantly, the ignorance these people demonstrated by putting so much pressure on these kids. Because at the end of the day, that’s all they are is kids. Some of the hockey team’s owners, managers and sponsors refer to the boys as products by accident, which is a Freudian slip of the tongue, because in the end, they ceased to be human as soon as they stepped on the ice. As a parent, I found this to be the most upsetting realization of the book.

I feel as though I can’t properly review a Backman book until I’ve included a quote, because his observations about life are just so spot on, I think it’s one of the reasons why he is such a beloved author. I’m still finding myself in a very sentimental state these days, so of course I’m going to include a quote about parenting:

Being a parent makes you feel like a blanket that’s always too small. No matter how hard you try to cover everyone, there’s always someone who’s freezing (p. 110).

I know this is so cliché, but when I read that line, I literally clutched my chest and said ‘ugh’ out loud to myself. It’s so true! So true! As a mother I always feel spread too thin, especially now that we are trying to help my duaghter with ‘online school’ while we work out full-time jobs. I’m grateful for my role as a mother, but seeing it acknowledged in print like this always makes me feel better because it’s nice to know you’re not alone in thinking this.

Although this is a dark book, I do recommend it, especially for those who have read other Backman books and enjoyed them. Beartown‘s exploration of pack mentality is something that holds extra weight during this pandemic because we are so at the mercy of others (at least, it feels that way). Learning to understand how we come to certain conclusions, why others think the way they do, how a group dynamics can affect individual thought, it’s all relevant right now.